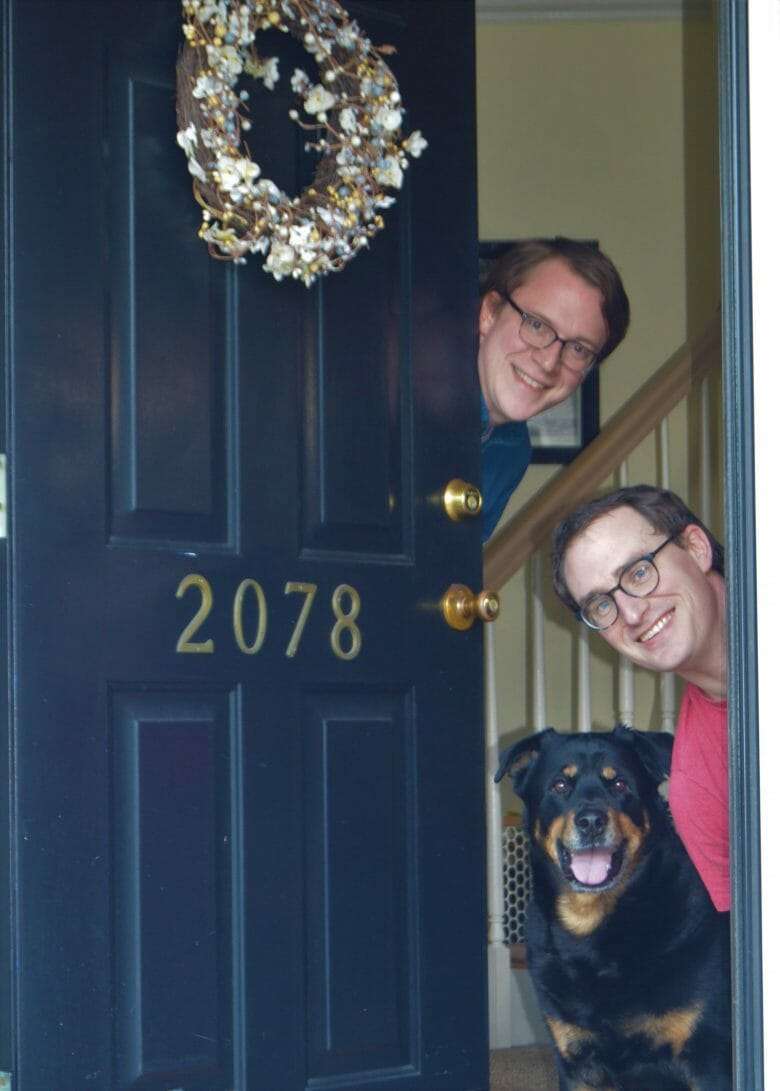 This is supposed to be funny. But very little about this year has wanted me to feel funny. I’ll try my best. All I know is Brian made me break the world.

Late last year, he got an invitation to preach in Palm Beach, FL on March 8. We had never had a beach getaway vacation or anything that you could win on Wheel of Fortune. They were putting him up at an oceanfront hotel before spring break, so it wouldn’t be that crowded. And he asked me to come with. Of course, I immediately said I wasn’t going to go because we had nowhere to put Max. However, I relented when he found babysitters for the whiny Rottweiler. And he was very whiny. He screamed from upstairs when they were sleeping downstairs until they slept on the sofa next to him. Junkyard dog indeed.

Before the trip, we began hearing news about a virus going around. We heard instructions about how masks and bodysuits would not protect you, so we made a game of sitting at the airport laughing at the people with the most ridiculous outfits. We counted the people who wore those pointless masks. And quietly mocked the groups of people walking around in trashbags.

Overall, we had a great weekend. It was cool, so the beach was not great. But we went on hikes and visited museums. We had a beautiful hotel view of the ocean. Little did we know that also staying at the hotel with us were officials from the Brazilian government, meeting the President at his estate, just down the road. We ran into them when Brian decided he needed to get a tropical cocktail since we were in Florida. They sat right next to us with their little flag pins and security detail. I wasn’t scared. But we should have been.

By the end of the weekend, the virus was making more news and beginning to spread. We learned of the different symptoms and saw them all over the airport. We sat near a woman with a hacking cough the entire flight back to Lexington. It was very reassuring. But we didn’t really get fearful until we found out two days later that the Brazilian government was rampant with COVID-19. We were in elevators with them. So, we began our own lockdown, fearing we were exposed by foreign agents. By the next week, everyone was in lockdown. And here we are. Nine months later, still locked down. So, I apologize. I’m never going to Florida again. I did this. I should have stayed home.

Otherwise, this year has been rough for other reasons too. One month later, I lost one of my heroes and best friends. My grandmother passed away a few days before her 100th birthday. Honestly, it still doesn’t feel real. Since we have not been back to Chicago since last Christmas, the void has not hit us yet. I still expect when we drive up the next time, we will stop by the nursing home and she will ask my mom, “Who are these handsome men you brought with you?” I know she won’t. But many days, I still think she will. I miss her every day.

Brian has been preaching online since we returned from Palm Beach. Church services look a bit different and our Sundays have a completely surreal feel compared to our first four years in Lexington. He misses being able to react to a crowd and provide them the hope and messages that he can see that they need. But he now has a Plan B, he has gotten very good at video editing. For me, I take a digital retreat each Sunday morning to ensure his internet connection is stable. In family news, it did get my parents to go to a church service for the first time, I believe, this millennium.

And just like for everyone else, it just been strange and lonely. We haven’t seen our friends or family in person since 2020 began. Basically, if you are receiving this letter, you haven’t seen us unless we were sitting in front of a camera. Luckily, we like each other, so it hasn’t caused any major problems. At this point, our most common argument is what do we watch next after finishing another series of whatever on one of our ever growing collection of streaming services.

Yet even with all of that darkness, there was light. Last year, I joined a trivia club that was hosted by a Jeopardy! Tournament of Champions winner. Joyfully for him, around the same time as the lockdowns, he welcomed his first child into this world and refocused on his family instead of the group. But for the group, there was a void. I decided I would try to write a 20-question quiz for the group to take. Almost nine months later, I have written 114 quizzes and had nightly fun with an amazing group of people.

At 10:30 each night, I meet up with people I barely knew before this pandemic began and who I have never met in person and the world seems alright. As children we are taught to fear those we do not know as strangers. But as Marge sings on one of my favorite Simpsons episodes, “A stranger’s just a friend you haven’t met.” I made a lot of friends in a year even though I haven’t left my house. It’s my ideal way of meeting people.

But this ability gave me all of the hope I needed this year. We are an adaptable-type of creature when we want to be. If you spend your time wishing for something that was, instead of working towards something you can make happen, life becomes angry and bitter and fearful. That’s why we cut our own hair with the dog clippers. But when you look around and realize that even when the world has given you nothing but darkness, you can stand up and do something for yourself and for others, then you succeed and you do make the world just slightly better.

Sure, I’m still stressed most of the time and I get scared and angry and sad. But I took that energy and placed it into something productive. I have worked on my novel this year more than I have in recent memory. Brian bought a guitar. And Max now follows Brian around all of the time instead of me because they have finally broken those barriers of who is my favorite. The answer all along was neither of them, so they bonded over that.

This Christmas, we miss all of you. We wish you the happiest of holidays and hope that 2021 lets us visit each and every one of you. Unless you live in Florida. Then you’re on your own.