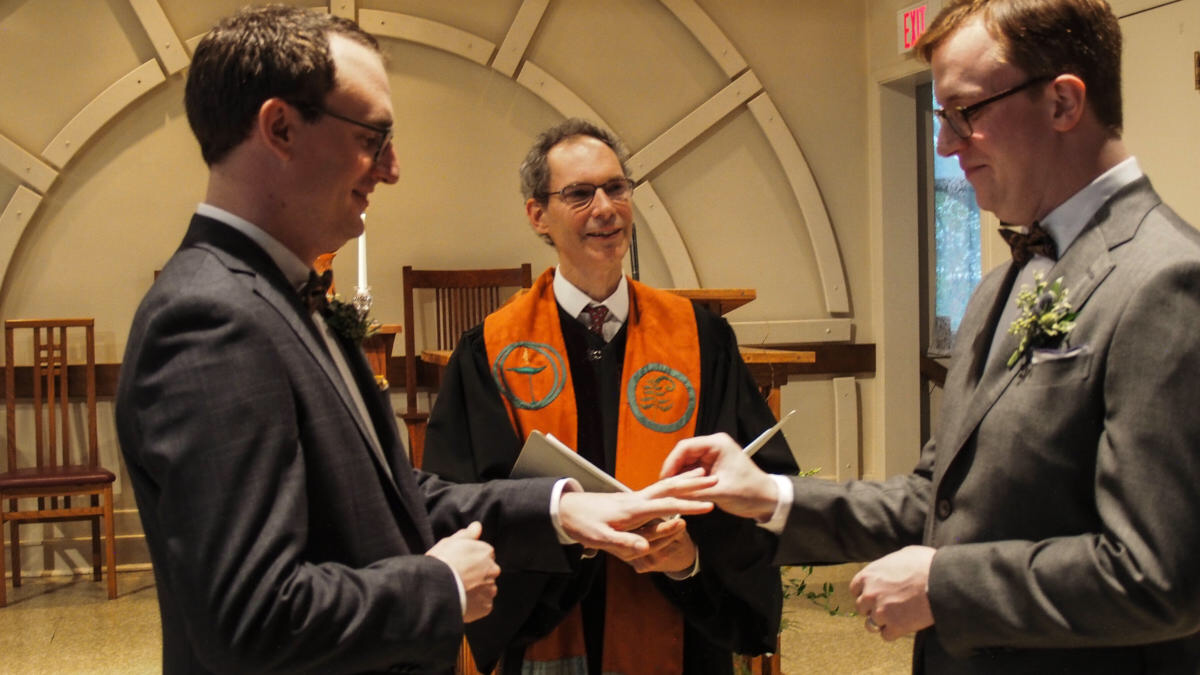 I carried the garbage can full of cut branches and torn-out winter creeper to the concrete patio behind our house. To use some of my PTO time, I signed up for a writer’s retreat since we were not going to go home for Thanksgiving. I had taken a break after writing about 1,000 words to clear my head. Over the weekend, I began weeding and cleaning up the yard for fall and since garbage day was Wednesday, this was my chance to put it into the can for pick up.

However, as I began to pick up the piles of branches, I noticed that my wedding ring had slipped off of my finger. In the two years we have been married, I only could remember one other time that I could not find my ring. I had taken it off upstairs and while I did the dishes, I noticed it was gone. Brian luckily walked right up the stairs and found it. But this time I remembered having the ring on my finer. I remembered thinking that it was going to fall off my hand.

During the pandemic, there seem to be two types of people: those who ate the entire time and those who did not. I did not. In fact, I got Invisalign retainers, so I have stopped snacking to meet the required 22-hour-per-day allotment of time to wear these plastic shields. Additionally, I have been working out to pass the time. So I’m down about 15 pounds since we got married. I think that’s what the kids call a humble brag. All that it meant this day was that my formerly fatter fingers couldn’t hold the ring anymore.

Put a Ring On It

After placing the garbage can on the patio, I returned to the area I was in and got down on my hands and knees to find the ring. As I ran my hands back and forth trying to sense a piece of metal against the rough fall grass, I cut up my hands. I pulled at dead grass, tossed small twigs to the side, and pushed away the leaves of the black maples that lined our fence. Nothing popped up.

I frantically ran back to the patio. I returned to the garbage can and turned it upside down. The packed branches and vines tumbled out into a large mass. I feared the ring could have bounced as I emptied the contents, but I began to pull apart each and every branch. Nothing at all.

At this point, I texted Brian who was on a conference call in his office that when he was done, I needed his help. A few minutes later, he came out with Max and asked what was wrong. I rarely texted him when he was working unless something bad happened. We retraced my steps and I walked him over to where I was in the yard. I kicked around some leaves and got back down on the ground. He joined me as Max sat on the other side of the fence wondering what we were doing.

He repeated one set of phrases: it’s okay; we’re still married. But it didn’t matter. I knew he would be upset if I lost it and I would be upset to have lost it in such a stupid way. We began talking about waiting until nighttime and using our flashlights in hope that light would reflect off of it. And we began to talk about metal detectors. I looked them up online and a few said that white gold is hard to find. But I ordered one from Amazon nonetheless.

We returned to the garbage can and the emptied contents. I examined each branch and vine again in hopes to have missed it the first time. Brian swept up and examined all of the dirt, dust, and pieces of leaves that came along. Nothing still. I began to panic that it was gone forever. He tried to reassure me that it was okay. And then said that we should go inside and relax.

Waiting Is The Hardest Part

My afternoon of writing was ruined. I lost my wedding ring. And I had to go back to report on my daily writing in 90 minutes. Brian then looked up more information about metal detectors and saw that you could rent one in town for $18 per day. I told him to call to see if they had it available. They did. The man on the other end of the line said that no one really rented it. Brian asked him to hold it for us and he said that no one would probably need it in the time it took for him to get there. He jumped into my car as his car was also having battery issues at the same time and away he went.

I looked up the location and noticed it was about 18 minutes away. Depending on how long it would take to pay for it, he would be back around 3:30, which would give me about 30 minutes before I needed to go back to class. I sat in my chair and moped. I felt terrible and had some tears in my eyes.

My class seemed less important. I began to write an email to my instructor to tell her that I would not be making it to class this afternoon. I would let her know why. But I really did not know how I would get any more writing done all week and this was only Tuesday. I felt bad for ruining my entire week of writing. I lost my ring. And Brian is going to be so upset at me. Little did I know that as he drove, he pondered ways to melt down his ring, split the gold in two and add a bit more to recreate the bands with at least a part of the ones we exchanged two years before.

He got back exactly when I imagined. I had not send that email yet and we tested out the metal detector. It didn’t look great. It was pretty old. But we knew the tricky part was knowing what sound it would make. We tested it on Brian’s ring. He held it in his hand and we heard a two loud distinct beeps. So we headed to the yard. I turned it on in the driveway and told Brian I would let him know if I needed any help. I walked about fifteen steps down the hill in our side yard and placed the detector in the location I had the garbage can.

It was a dried out spot with some Bermuda grass that already went into hibernation for the winter. As I lowered the metal detector, I heard the same two distinct beeps that we heard in the house. I bent down and there it was. I picked up the ring that had a bit of dust on it and yelled back towards the house. “Found it!”

Brian laughed as he had not even gotten to our front door yet and said, “Best $18 I ever spent.” And I heard the door shut behind him.