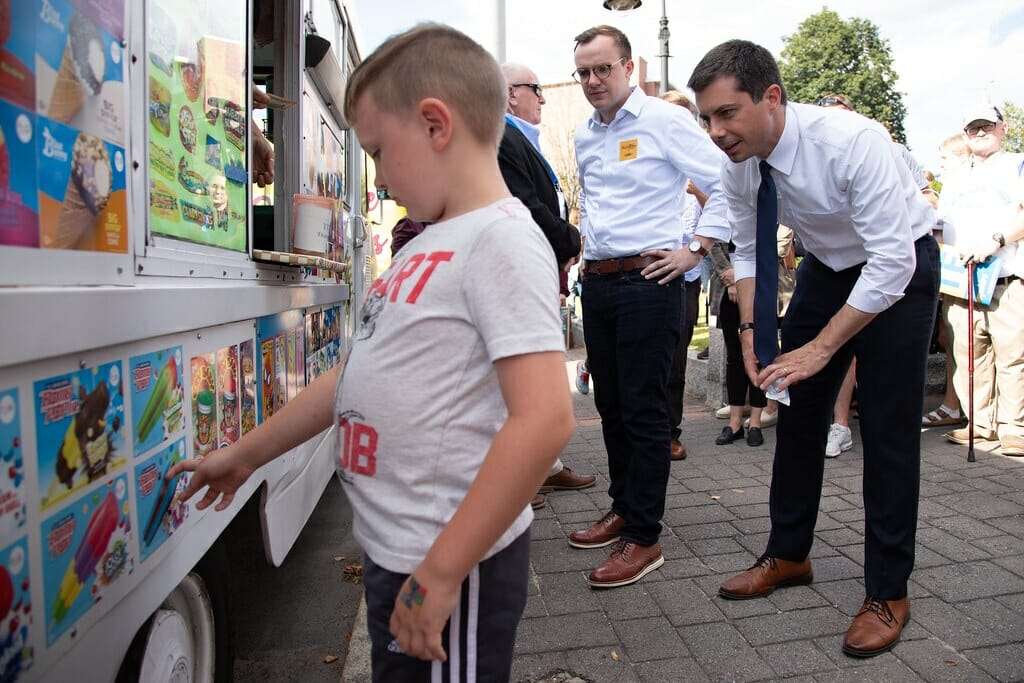 I remember sitting at my desk in Riverwoods and reading the South Bend Tribune when Mayor Pete Buttigieg came out. Only a few years after I came out, a man about the same age as I did the same in a public way. Of course it was a political act. But he caught my eye as someone to watch. I did the typical thing of following him on social media and remembered his name.

Only a few weeks later, I would be moving to a place that I considered similar to South Bend – a college city in a the middle of a very conservative state. I saw the mayor stand up for himself when Indiana tried to enact “religious freedom” laws. And it gave me hope.

When after the 2016 election, he announced he would run for DNC chair, I donated immediately. I thought it would be powerful to have a gay mayor from the middle of the country leading the party. But I also thought he probably did not have the skills for the job. I was just happy he was running.

He ended his campaign before any votes were cast for that race but I figured he was setting himself for a larger audience and job. As a progressive in Indiana, he had very few races to run. A Democrat held the Senate seat, so that was out of the question. And the governor’s race wasn’t until 2020.

And Then He Ran for President

So I was not surprised when he ran for President. And I donated to his exploratory committee. I considered quitting my job and working for the campaign. But I figured my husband probably needed me around. Instead, he bought me a shirt calling me a member of the Mayor Pete Exploration Club.

His book was pre-ordered and although it was not my favorite book of 2019, it read like a political autobiography. I enjoyed watching his town halls. And we got magnets, pins, and all of the other accessories.

As the election continued on, I was not sure I would vote for him. Not because I changed my beliefs or lost faith in him. Kentucky’s primary comes really late and I had to wait to see what would happen before making any announcements. I continued to support his candidacy and him as a candidate.

When Twitter and social media would pounce on him for moderating positions, I took a lot of it very personally. When people took an out of context quote that made it seem like he wished he was not gay, I got mad. I wrote about the “best little boy” theory and I saw myself. I understood wishing I was not different. I understood doing everything to succeed and be the best person in the entire world.

Privilege and inability to think about anyone besides yourself or your story makes it impossible for people to understand those of us who others consider “not gay enough” or lacking some sort of experience because of choices we made. It’s one of my biggest problems with social media. Everyone thinks their story trumps anyone else’s. Listen to someone else’s story. You don’t know what their morning, day, month, year, or lifetime is like. But you can affect their present and their near future with an understanding heart and positivity.

My politics are very on the page. I am a pragmatist who believes change takes decades and that the work you put into place is for the next generation to complete. Anyone who tells you something who happen fast is lying. And they don’t know history or how our federal system works. There is only one body that can do something fast and it’s the focus of this blog – the Supreme Court. Justice Douglas and his brethren used the Court to bring about most of the radical change we think about when we think about America. And as I wrote only a few days ago, the current Court will do everything it can to halt and reverse that progress. It will definitely not let any progressive change come to fruition.

It’s one reason why I liked Mayor Pete’s thoughts on changing the democratic process and the Supreme Court. Legislative developments rarely happen. But they require systematic changes. And only he (and Senator Warren) talk about that. The President and the Republican Party put their version into practice. And as usual, we are left with people who believe a quip on the internet or a platitude will lead to a progressive heaven.

I wasn’t surprised. In the last few weeks, it became clear that the mess in Iowa killed all of his efforts there. And like many pragmatists who live in conservative states who cannot imagine another four years of the President and his destruction of a free society, he made a decision that seems practical and potentially to lead to a Democrat winning in 2020.

I have no idea if he is right or if pundits as usual are full of it. But just like when people belittled or questioned how gay is he, now they will question how progressive he is.

I watched his speech. Chasten made me tear up. I understand what it feels like to support a spouse in a public setting. It ain’t easy. But it’s rewarding. And sharing him with people is exactly that. People never really age. From toddler to adult, no one shares well! However, you get to meet so many good and decent people. I just don’t have to eat fried foods — too often.

I’m hoping he gets to do something next. And hopefully it isn’t a boring cabinet job.

All I can say is we make our decisions based on information we have or believe. I toy with voting for Senator Warren because she is most likely the closest to me politically. I donated to her before he dropped out. And I do think she can beat the President.

I worry about Vice President Biden’s abilities. I hope he puts things together but right now, he seems out of step. I also have no idea if he can generate enough enthusiasm to come out ahead. And with so many angry liberals sitting on the internet ready to destroy him for unknown reasons (and bitterness), I worry that his nomination would destroy any chances for 2020.

I also do not believe Senator Sanders would win or that he would get anything accomplished. The people he has hired to be his surrogates are not people I trust or like. They are also bullies. I have spent my whole life being bullied and I can spot one from a mile away. And part of this is I still hold a lot against his supporters for many of the homophobic and disgusting words used by them towards me and my support of Secretary Clinton. I’d vote for him but his campaign has done two things: bullied and over-promised. I would be doing my duty, but I would not be proud of my vote.

I remember calculating 2020. It would be the first time I could run for President. I had a plan. And ironically, it wasn’t too different than Pete’s. Join the military. Go to law school. Become a public defender. Become mayor of Chicago. I even stood on a boat in Lake Michigan as a senior in high school and said, “One day, I will rule it all.” As if I was Simba.

Dreams change. Plans shift. Depression crushes everything. But it felt awesome to see someone who looked like me standing on a stage. I finally got it.