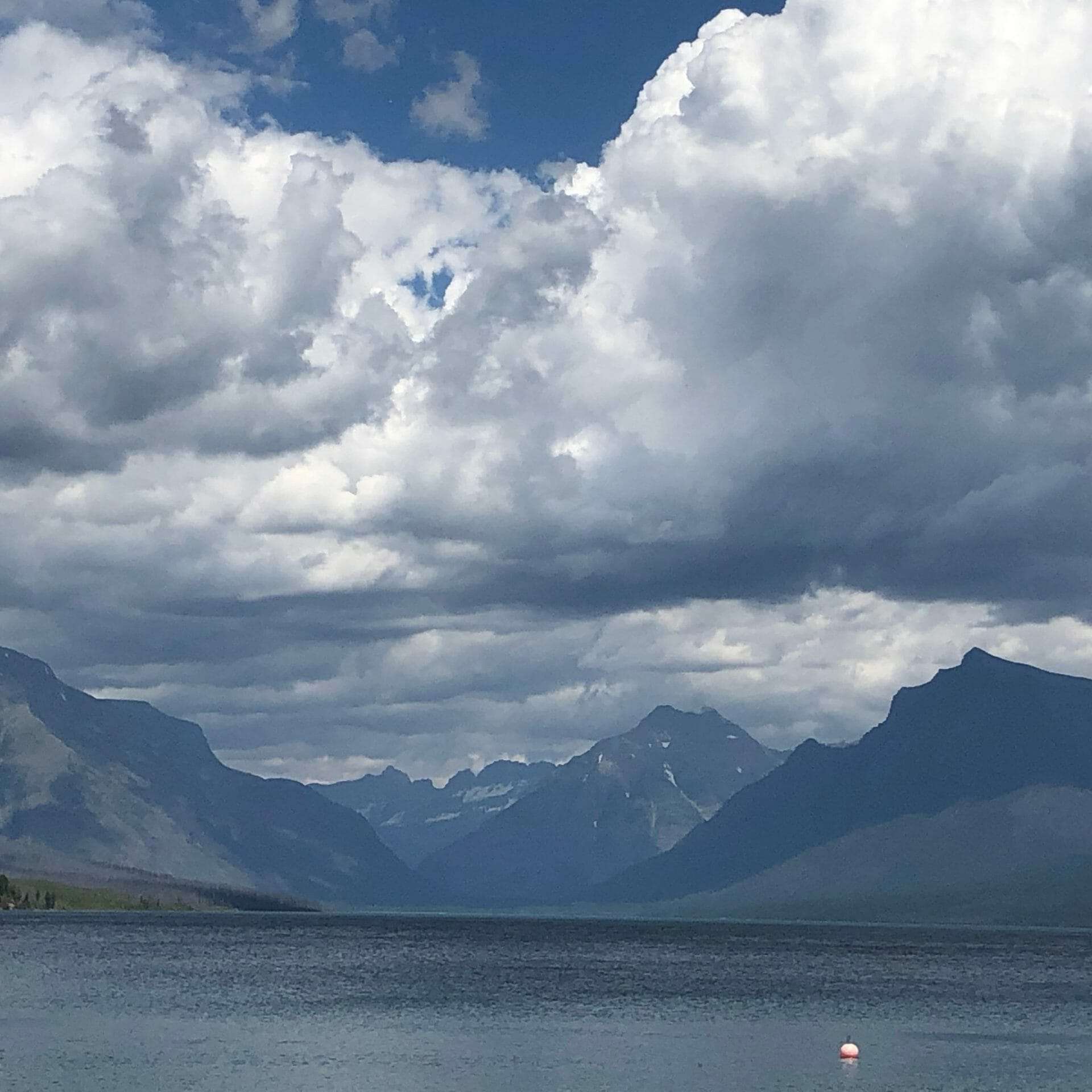 We missed the shuttle. After the Red Bus dropped us off, we thought we would head up to Avalanche Lake. But each shuttle looked more crowded than the last. Each biker appeared to have brought six friends. They all wanted to enjoy a trip on the Going-to-the-Sun Road without any cars to potentially push them off the mountain. It looked like our first full day at Glacier National Park was over.

Since I was not ready to leave the park, I wanted to try the Apgar Lookout hike. At the top, you can see all of the major peaks of the park and our guidebook said it was easier than the hike we planned for the next day. However, it began as all good hikes do: without knowing where the trailhead was.

We were not alone. Two recent University of Arizona graduates stood outside of their car and asked us if we knew what we were doing. Arizona did not prepare them for understanding basic body language. At this point, Brian noticed a sign that pointed down a dirt road to what could be the trailhead. To symbolize our first year of marriage, I disagreed and told him that I don’t think he was right.

But he was right. The two Arizona grads followed us in our rental Jeep down the dirt road. We found the trailhead where Brian thought it would be. But that single hike in Montana exemplified our entire year.

Together Is Better than Apart

When I first told Brian I wanted to go to Glacier National Park, he looked up the park and saw that we would need bear spray. It also recommended that you walk in groups of three or more. Brian asked me how we would find other people to walk with and I said that when you’re hiking, you join with other couples. You may not walk step-by-step but you walk near each other.

Of course, our random assignment of hiking partners were in their early twenties and in much better shape. However, this was their fifth national park in the last three weeks. We learned that all of our work to prepare put us into the “tired twenty-something who has slept in a tent” tier of hiker. Specifically, one seemed to be done with the overexuberance of his friend. At least three out of the four may have voted to turn around.

We almost gave up on the trip before we even got there. In April, I found a growth in Max’s mouth. After several weeks of tests, we learned he had an oral melanoma. Depending on the spread and placement, the cancer can take a dog in a matter of weeks. Luckily, the dog looks at me all day with a gaping mouth. We caught it early, he got a bit of a facelift as a few inches of his lips were extracted, and he continues to receive treatment through a costly vaccine.

The three of us relied on many people throughout this series of unfortunate events, including Max’s new oncologist. He’s the joy of the cancer ward when we take him in for his bi-monthly checkups and x-rays. And as I write, we learned that six months later, the cancer has not returned. But all of the stress led to some extra calories and a bit more sympathetic treats as he approaches 100 pounds.

Your Guide May Be Wrong

Our Glacier National Park guidebook was written before a massive forest fire took out most of the trees on the mountain. The once shaded series of long switchbacks felt like a 2,000 ft death march straight up. We bought waterproof bags, snacks, windbreakers, and trained by running and working out. We took all of steps we thought necessary and even planned out the entire five-day trip to allow recovery. But plans change as I got a sinus infection that would have been painful in Kentucky. In Montana, it felt like a vice grabbed each of my temples, squeezed, and then a second vice tightened that one.

We adapted. And we tried things we may not have tried. We tried a path even if it felt difficult. And we did the same at home. Brian joined a meditation group and I signed up for even more creative writing courses. And of course, without the trees and the very sore throat, two-thirds of the way up, it began to rain.

Every Success and Failure is Worth It

Neither of us stood on the top of a mountain top before. The rain that fell on us for the past couple of miles evaporated and the skies cleared just long enough for us to see rain on distant mountains. Each of the peaks (and supposedly Canada) stood before us. We laughed with our new friends and took pictures of each other. We met a group of women who congratulated us for making it and showed us a picture of the moose they encountered the day before. We laughed about their near-death experience. We did it.

Earlier in the year, our shower door broke. And I became determined to fix it. I ordered a new Kohler door and bought a whole bunch of power tools to perform the task. One Saturday, I decided to do it all. The old door was down, the plastic shower casing was cleaned and scrubbed, and the new door frame went up. But the door — too small. They sent the wrong one. I asked Brian if the door that was obviously 2 inches too small would work? And he just told me to put it down. We still have that extra door in our guest bedroom if anyone has need for a large pane of glass. Of course, customer service was great and I received a second one. But that one was broken by the delivery people who wanted to know if I wanted the broken door delivered to me. I declined the kind offer of glass shards. A third door was sent and received a month later.

When it was complete, it didn’t look perfect. Thankfully my cousins were visiting and Andy works at Kohler and is handier than me and knows stuff about screws and hammers and glue. He got it to close without sticking. And now, I look at the shower door every day with a little bit of pride.

With our success behind us, walking downhill seems simple, except for the blisters that now have to get used to a different type of rubbing. We talked with our new friends with excitement and pride. And then it down poured. The drizzle became a drenching. The lack of trees punished us with the sun and now with the rain.

Halfway down, the sun returned and the rain moved on. The mountain got hot. And we began to dry, with each step, our once wet clothes became drier. It helps when you buy water repelling clothes recommended in the guidebook that brought you on this journey.

We got to the cars with only a bit of sweat on us. The wetness was gone and we said goodbye to our brief friends. We drove off in different directions without having to change clothes. After a hard journey up and down, we had the memories to share, but when we got to the restaurant for dinner afterwards, unless we told someone about our struggles, no one else knew.

2019 had its ups and downs just like the hike. Parts seemed easy, parts did not line up with expectations, and days felt impossible. But we made it through it. We made mistakes, we forgot to do things we wanted, and we wish we did more than we did. But time marches on. Wouldn’t want it any other way!