Zorach and the Separation of Church and State 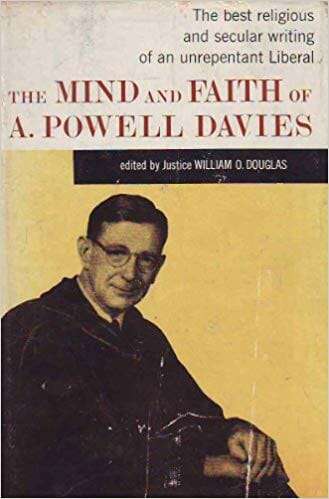 “A Christian missionary went from England to India…to save the heathen from their blindness and bring them into the light. One day, in the streets of a crowded city, he saw a beggar, seated on the pavement, his body covered with sores. He felt moved by the man’s misery and went to speak to him. He told him that he he had brought him a truth that could save him-the truth of salvation through Christ. The beggar listened for a long time. Finally, he said: “You have spoken much of believing. Did your Christ say anything of how men should live?”

“So did all the great teachers,” replied the beggar, “but which of their disciples acts upon it? You, yourself – do you do what your Christ commands?”

“I try to,” replied the missionary.

“Good,” said the beggar, “Then bring a bowl of water and wash my sores.”

“The missionary felt a little sick. he said he would come again, when he had more time. Which he never did. But wherever he went, the words went with him. ‘You, yourself – do you do what your Christ commands?’ ‘ I try to.’ ‘Good! Then bring a bowl of water and wash my sores.’

“That is what the whole world is asking – especially its destitute and forlorn, who live in desolate places. Do you believe your religion? Do you do what it commands? Then cleanse the world’s sores; bind up its wounds and heal its miseries.”

A. Powell Davies, as quoted by William O. Douglas in “An Almanac of Liberty

For Christmas, I bought Brian a book or sermons by his favorite minister, A. Powell Davies, as edited by my favorite Supreme Court justice, William O. Douglas. If anyone needed any proof that we were destined, it is that sentence.

Argued in January 1053, Zorach v. Clauson let Justice William O. Douglas write his thoughts on the separation of church and state. Although he believed in a strong wall, this case remains the example of how jurists can put holes into that wall. At times, that wall becomes incredibly important. But at other times, people like to provide simple examples of why that wall put up in McCollum needed some leeway that Zorach provides.

However, in a week where we continued to listen to people discuss actions of religious individuals and a government shut down, this sermon that Rev. Dr. Davies gave on December 13, 1953 stuck with me. We live in a current system where the Republican Party has become the party of white evangelical and the religious. Almost 75% of white evangelicals support the President, who religious leaders have begun to make excuses for. And ironically to Zorach, the main reason why evangelicals stick with the party: the Supreme Court – to break down the walls and end abortion rights for women.

I wrote my senior capstone paper on American Great Awakenings and the political ramifications. My thesis was that we were in the Fourth Great Awakening with the rise of the religious right and its control of the Republican Party. I think it still works but it changed. The religion is not Christianity as I thought – it’s “conservatism.”

When you read the above, it sounds like something that would come from liberal Christians. I would imagine Fr. James Martin tweeting a sort of this story. But as we listen to conservative leaders, they have decided to take the wall approach, unironically.

The Shifting Wall of Separation

Jerry Falwell, Jr. said that in regards to the children in cages, that although Jesus said to love our neighbors and the poor, we cannot expect government to do that. He argues Jesus separated government and religion and would not have expected government to save the poor because he said that one should render to Caesar’s what is Caesar’s.

Compare that to his comments on abortion and choosing a Supreme Court justice that will overturn Roe v. Wade, ” This is a vindication for the 80 percent of evangelicals who supported Trump. Many of them voted on this issue alone.”

I believe wholeheartedly that religion and politics are intertwined. Many people define themselves and their belief system through their church. But I also believe that government should not institute a religious belief system. However, nothing upsets me more than this sort of discernment. Pick and choose your morality, but say what you are doing.

Justice Douglas tried to draw this fine line. New York implemented a program that authorized public schools to release students, with parental permission, during certain periods of the school day in order for the students to attend religious services or classes.

Douglas argued that this case differed from McCollum v. Board of Education, which involved a “released time” program from Illinois. In that case, the classrooms were turned over to religious instructors. Opponents argued that coercion existed so that students felt pressure to go to the religious services or classes. However, the Court noted that no evidence of this existed. Douglas stated that if such evidence did exist, the case would be very different.

Justice Douglas stood firm in his majority opinion in
Zorach : “There cannot be the slightest doubt that the First Amendment reflects the philosophy that Church and State should be separated.” That in regards to free exercise and establishment, the separation is complete and unequivocal. However he noted that common sense must prevail in some circumstances. Otherwise, the state and religion would be aliens to each other — hostile, suspicious, and even unfriendly. Examples included:

I understand everything Justice Douglas wrote. It does seem silly to have no church within state. But I also see problems. Why should a public school have any relationship with a private organization? Why do we have prayers to start government activities. Churches should pay property taxes. Snowball effects hurt, but as Justice Black states in his dissent: “Difficulty of decision in the hypothetical situations mentioned by the Court, but not now before us, should not confuse the issues in this case.”

Dissenting Against Any Touched Brick

Justice Black dissented in Zorachand disagreed. He believed that wall of separation needed to stand tall and unbroken. He feared that exempting situations would allow all kinds of intrusions into the religious space. His fear stemmed from religion becomes too governmental.

Under our system of religious freedom, people have gone to their religious sanctuaries not because they feared the law, but because they loved their God. The choice of all has been as free as the choice of those who answered the call to worship moved only by the music of the old Sunday morning church bells. The spiritual mind of man has thus been free to believe, disbelieve, or doubt, without repression, great or small, by the heavy hand of government. Statutes authorizing such repression have been stricken. Before today, our judicial opinions have refrained from drawing invidious distinctions between those who believe in no religion and those who do believe. The First Amendment has lost much if the religious follower and the atheist are no longer to be judicially regarded as entitled to equal justice under law.

State help to religion injects political and party prejudices into a holy field. It too often substitutes force for prayer, hate for love, and persecution for persuasion. Government should not be allowed, under cover of the soft euphemism of “cooperation,” to steal into the sacred area of religious choice.

On this Sunday, it’s hard to imagine a non-church life as I’m married to a minister. But it’s also hard to see how religion and government exist when one party has subsumed “religion” by turning conservatism and the Republican party into their love of God. I fear Justice Black was right.