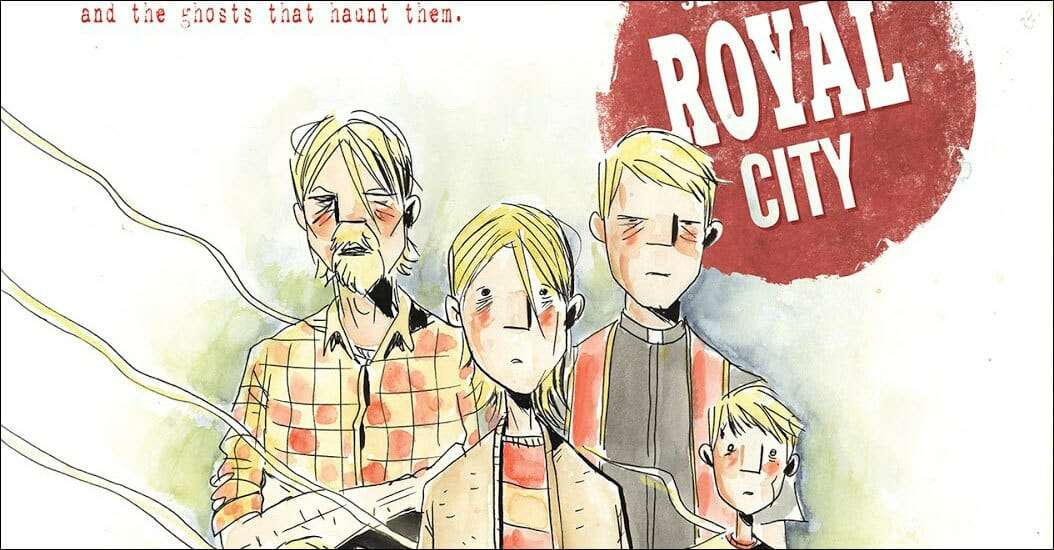 In his closing letter, Jeff Lemire wrote about how he thought that he would spend a lot of time in Royal City and that it could end up being a location he would pop in and out of for a very long time. Fourteen issues into a run, he seems done with them. And it makes sense why.

Focused on the Pike family living in a small town, Lemire creates a literary fiction Image series. A son returns home as his literary fame wanes. He had written a successful book based on a notebook he found from his brother, Tommy, who drowned as a teenager.

A Comic Take on a Novel Plot

When you read literary fiction, you get used to plot devices such as a dead sibling and a dying town. A writer coming home after failing to create a successful second novel stars Steve Carrell and comes out every Oscar season. But Royal City allows a graphic approach to this story.

Without the purple prose or soundtrack (unless you listened to the music Lemire recommended), you focus on the pictures. Each character has a solid story line (even the father in a coma) with a satisfactory beginning, middle and end.

Each component has been done before, but as they lay together, with the connection of Tommy, it never feels old. However, the phrase that appears over and over again is “personal project.” I don’t really know what that all means, but it does have many heartbreaking scenes.

Everything wraps up nicely. I could imagine a future for Royal City. I do hope that Lemire returns to this world in the future. But I see why he ended the series here. All of the main characters have come to a realization and accepted their pasts. And the future seems different than it started. That’s a good story.

Lemire’s art has an undeniable style. Since I first encountered his work in Sweet Tooth, his painterly lightness adds a sense of melancholy with a strong, rigid line work that can at times make people like grotesque, yet real.

Due to the subject of this story and the visions that each character has of the spirit of Tommy, the art style matches perfectly with the story. Although the large eyes and soft reflections off of glass can become a bit distracting, due to the introspective nature of the story, it works. Lemire knows his strengths as a writer and an artist and Royal City continues his streak of successfully melding the two.

I highly recommend Royal City if you are interested in narrative fiction and are not sure why I love comic books. Lemire has many great books out in the marketplace. Here is a good starting place.