Bosque Redondo and The Long Walk 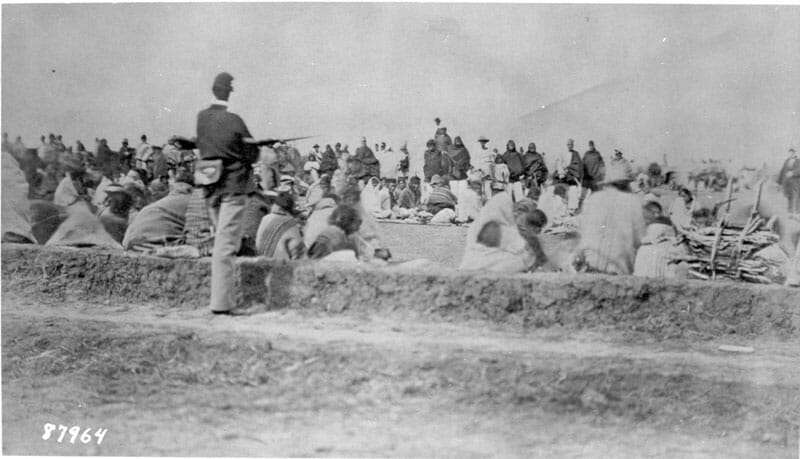 The Treaty of Bosque Redondo between the United States and many of the Navajo leaders was concluded at Fort Sumner on June 1, 1868. The treaty allowed the Navajo to return to a small portion of their original homeland in Arizona and New Mexico. The U.S. government promised basic services in exchange for peace. The Navajo began the long walk home on June 18, 1868. But first, they needed to take a Long Walk to their prison camp.

Manifest Destiny and the Civil War

As the battles between the North and South intensified, they moved their fighting to the frontier of the western territories.  With strong secessionist sentiment in Southern Arizona and other portions of the West, the Confederate Southwestern Campaigns sought to take Utah, Colorado, Arizona, and California from the Union. Initially, the Confederate armies marched into New Mexico and Arizona with many successes. This included declaring Arizona a full confederate territory in 1861. However, following this declaration, the two most important battles of the West occurred.

As reinforcements from California arrived, they fought the Battle of Glorieta Pass on March 26-28, 1862. The battle resulted in a Union victory. Although the casualty rate was low, it effectively ended the Confederate expansion due to a lack of supplies. The Battle of Picacho Pass finally drove Confederate forces from Tuscon, Arizona, and out of the Southwest shortly after.

However,  James H. Carleton was summoned and joined this “California Column” to counter the Confederate invasion in New Mexico. But he arrived too late. Instead, he decided to focus on the Native American populations. He created Fort Sumner with the approval of President Lincoln to “protect settlers” in the Pecos River Valley from the Mescalero Apache, Kiowa and Comanche. But he had another plan in mind: he felt the site of the fort on the Bosque Redondo on the Pecos River would be a good site for an Indian reservation.

A name that appears in movies and television shows, Carleton reached out to Kit Carson. He ordered Carson with five companies of his New Mexico Volunteers to reoccupy Fort Stanton. , one of the forts in Mescalero Apache country. On his way to reoccupy the fort, Carson received the orders to pursue and kill all Apache men and take the women and children captive to the fort.

Carleton allowed Carson free reign to conduct the campaign. The only goal was to beat the Apaches, which led to them killing and capturing them whenever and wherever they wanted. Chief Cadete appealed for respect and mercy. But the only way they would stop being massacred would be if they agreed to migrate to a new reservation. Eventually, Cadete agreed to the terms of surrender. In January 1863 nearly 500 Mescalero Apache were forced to leave their homeland. They were exiled to Fort Sumner, more than 100 miles away from their homes. On February 1, 1863, Carleton reported to Washington that “the Mescalero Apaches had been completely subdued.” Next on the list. the Navajo.

He ordered Carson to proceed to Navajo territory and to receive the Navajo surrender on July 20, 1863. When no Navajos showed up, Carson and another officer entered Navajo territory in an attempt to persuade Navajos to surrender. The US Army starved the Apache and Navajo into submission. During a final standoff at Canyon de Chelly, the Navajo surrendered to Kit Carson in January 1864. Following orders from his U.S. Army commanders, Carson directed the destruction of their property and organized the Long Walk to the Bosque Redondo reservation, already occupied by Mescalero Apache. The plan was to turn the Apache and Navajo into farmers on the Bosque Redondo with irrigation from the Pecos River.  In the end, the US government sought to “civilize” the people they starved by sending them to school and forcing their practice of Christianity.

By summer of 1863, the reservation had fields with crops planted. Unfortunately, cut worms destroyed the complete harvest. Without crops, meager Army food rations feed the Indians.

The Apache decided that if the Army could not keep their promise to feed the tribe, they would take action. Chief Cadete decided if they all tried to leave at once, most might get away. On November 3, 1865, all 400 Mescalero Apache deserted the fort and began their exodus back to their own country. Only nine people, who were either too old or sick to travel, remained to keep the campfires burning to fool the military into thinking that all was normal.

The Navajo were finally acknowledged sovereignty in the historic Treaty of 1868.

At this point, the US government realized the Bosque Redondo Reservation failed. They finally listened to the leaders of the Navajo who remained after the Apache left. Congress did nothing after debates. But the military continued to work to negotiate a new treaty. During negotiations, Chief Barboncito stated, “The bringing of us here has caused a great decrease in our numbers. Many of us have died, also a great number of our animals. Our grandfathers had no idea of living in any other country except our own and I do not think it is right for us to do so.”

The Treaty of 1868 was signed in a field between the Fort and the Memorial. By definition, a treaty can only be signed by two nations. Thus, the Treaty of 1868 established, under Federal Law, the sovereignty of the Navajo Nation. The treaty allowed the Navajo were allowed to return to a small portion of their original homelands in the Four Corners Region.

American history reflects many horrific events where we treated others as less than human. For no reason outside of power, the US military decided to move people out of their land to an area where poisoned water and misery abound. For three years, the government knew people suffered at the hand of their oppression. Yet, the government did nothing. Through a Civil War where people were freed, others were subjugated. Their names disappear while their torturers become legends.

As the pictures above show oppression of people who sought only to live their lives, how will pictures 150 years from now look at us?

Several weeks ago, I wrote briefly about the 1882 Immigration Act, also known as the Chinese Exclusion Act. I framed it around the Statue of Liberty. However, due to the times we live in, American Experience must have decided to create a documentary about it. If you missed it on PBS, you can watch it now online. Check it out!