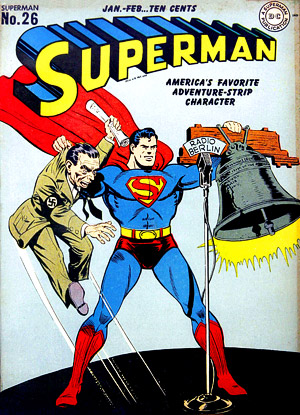 I read a lot of comic books. In total, I have over 10,000 single issues that I have collected for twenty years. I purchased my first comics in July 1997 – Superman 127 and JLA 9. To call my reading and purchasing habits an addition would be downplaying it. But I love the larger-than-life characters and the hope they provide.

When I began reading, I was a depressed high school student who had very few friends. I needed a world to escape to where life seemed easier. Superman, who was a lightning bolt at the time, provided me with that image. And with only a few breaks a long the way, I have bought just about every Superman comic published in those twenty years.

With the events of yesterday in Charlottesville, I look to my comic books. Superman lives in a world where Lex Luthor and his other villains have no fans. Their supporters are henchmen and also evil. Ironically though, within the first few years of my comic book habit, Lex Luthor became President. The story really did not go anywhere. And that was most likely because for the comic book world to make sense, the heroes have to defeat villains who have no public support. Otherwise, Superman would have counter protests. And that is also a reason why the Marvel heroes did not generally make sense to me.

Marvel sets up their heroes with gray areas. You have Spider-Man and the X-Men, who are hated by the general public. Only when they have specific encounters with people do those people trust and love them. Otherwise, they are villains, or at least the other. Unfortunately, this picture of the world may be more honest.

When white supremacists march on a city, counter-protests always appear. But generally, they do not have the support of the federal government. Yesterday, they did. And that’s a world that does not make sense to me.

White supremacists are the definition of evil. They hate. It’s their defining characteristic. And in comic books, hate means evil. Captain America, Wonder Woman, Superman, and the test all defeat villains who hate. Any of their followers who also hate become collateral damage in the fights – and end up in the prisons. In fact, they seem to be the only people in the prison system in comic book universes.

Instead, we had leaders talk about how hatred and bigotry on both sides lead to two police officers and a young woman losing their lives. As Jake Tapper asked today on CNN, how many people did counter-protesters kill?

We all know which side the comic book heroes would be on. Even putting aside the stupid current Marvel Secret Empire storyline, they fight hatred and evil. Almost all of the major heroes have a fascist-type villain group or individual in their rogue gallery. But yesterday, we saw that evil walking the streets without a President standing up to call out their evil. And they knew they would not get that.

You Knew Who You Voted For

Last year, Jake Tapper asked a Presidential candidate about the support he received from David Duke. He did not condemn Duke, he did not condemn white supremacists, and then he became President. His opponents at the time, including Senator Marco Rubio, condemned him and said that such denials of condemnation made the candidate unacceptable. Except when push came to shove, Rubio, like so many other Republicans, voted for him. And they need to live with that.

The actions that occurred yesterday lay on their heads. And they should. The White House is staffed by individuals close to white supremacists, who have used white supremacy, and who used bigoted and dog-whistle language to entice these sad individuals. The white supremacists, as Jamelle Bouie noted, hold power in the current administration and with the Republican Party. Three candidates for Senate in Alabama have barely decried the violence and the deaths. The Vice President has echoed a hollow ring of “both-side-ism”

And You Did It Anyways

With just a quick glance through Twitter, you can see Trump supporters rallying and saying that their leader does not support this hatred. And that they do not support this type of hatred. But you can tell a lot about people based on those that surround them.

One reason I quit Facebook one month ago is that I lost friends and contact to people based on the 2016 election. I would decry all of the white supremacy and Russian tag that the now President played. And I would have people I consider friends tell me that I was making stuff up and that it’s not that bad. I do not get to see what those same people are saying (or not saying) about Charlottesville. But if you did not vote for the Democratic candidate for President last November – if you sat out and did not take your vote, if you voted for a third-party, if you voted for the Republican to fill a conservative seat on the Supreme Court – enjoy your privilege. Look in the mirror and realize that you let this happen because you felt safe. White supremacists feel like they have power in our nation because you stepped back and did not realize the environment you ignored. Like so many climate change deniers, you denied the evil that this current administration could do. Put aside the policy concerns, but what does the United States of America stand for now?

Within minutes of a van driving through a crowd by an Islamic terrorist, the President tweets about it regardless of knowing the facts. When a van smashes into a mosque, when a mosque is bombed, and when a young woman and dozens of her fellow protesters are driven down, he says nothing of value or nothing at all.

People called Brian and I after the election to see how safe we felt in the south. We are upper-middle class white guys. We have been fine. But we have been more active politically – with our time, money, and resources. But what happened in Charlottesville continues the rallying cry.

If you are one of the people who allowed this Presidency to happen, you have time to change what happened. You can work on changing our world. But it takes superhero like tactics to do it.

You acknowledge evil. You get a team together. And you defeat it. No guns, no death, and with justice for all.