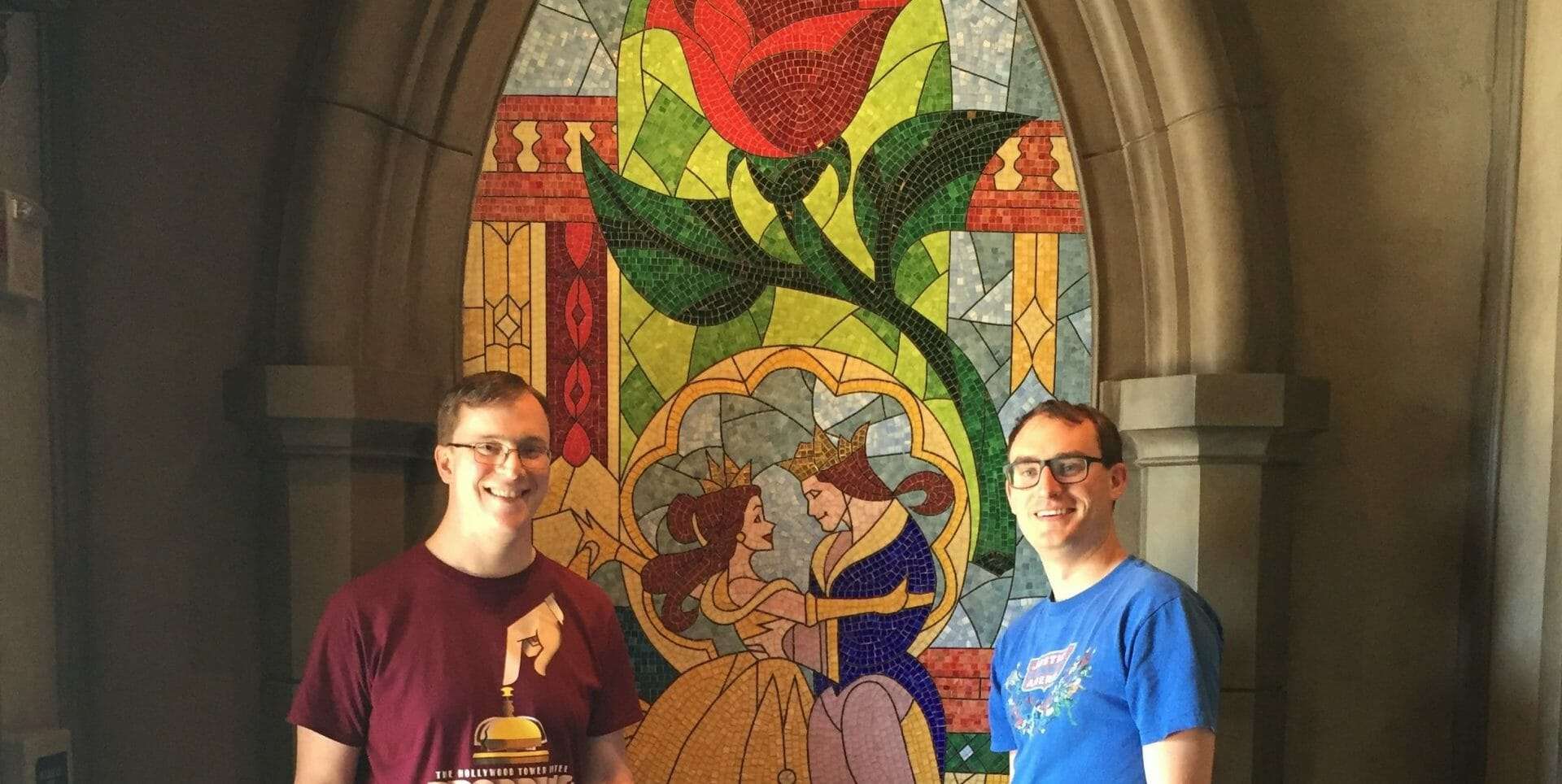 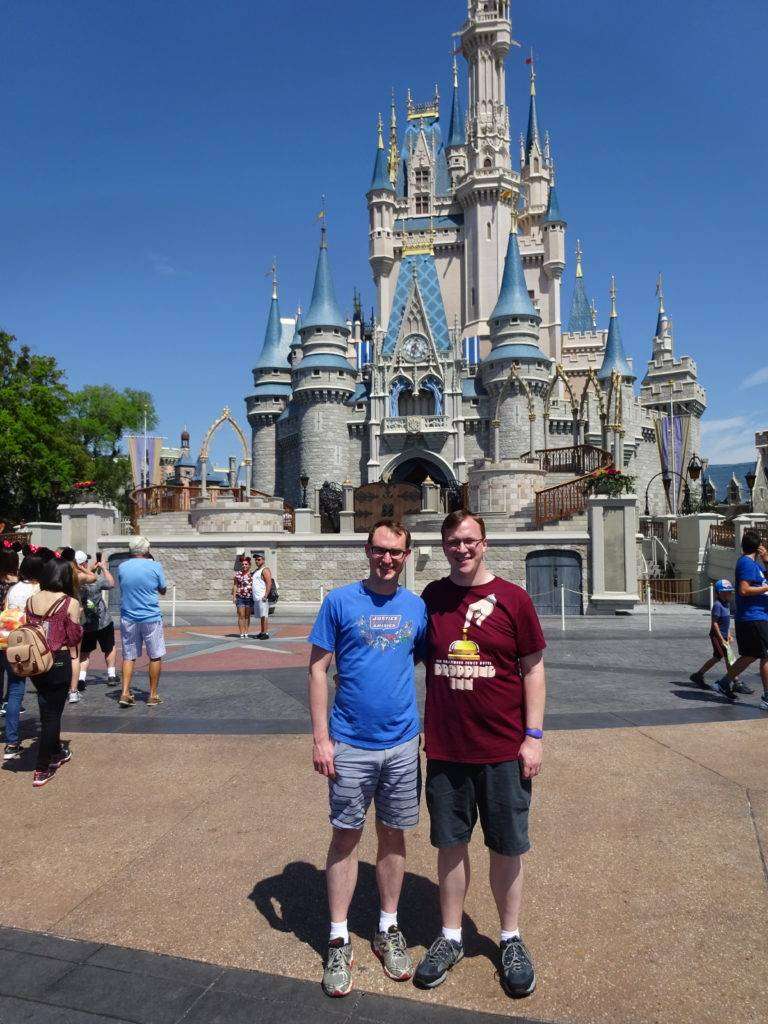 This took an incredibly long time to write due to other circumstances, but it will also be nice to reminiense.

On that last point, they warned me that the characters don’t really waltz around the park too often anymore. But otherwise, they agreed.

We went every day after the other parks closed and truly experienced everything – at least once! I preferred the park at night. Much cooler and the lights shine bright.

On our first night, after visiting Epcot, we headed over to Big Thunder Mountain Railroad. I do not like roller coasters and this one did not start my enjoyment. I enjoyed walking in the line. And we walked the line while the fireworks were going off. It’s beautiful. But the train ride was not as smooth at the Metra. Felt more like a CTA ride. It also felt like it went on for an incredibly long time. I wish I liked rides more because I think this looks like a fun one.

Back in college, I went to Disney Land. I remembered this ride. I did not like this ride either. Falling from a mountain may by my greatest fear. But I promised to ride everything once. I did not have to do it again, but I would give it a try. I did a lot of cowering anytime the ride would fall at all.

I did enjoy the animatronics, just like the other rides, but it takes a long time for anyone who just likes to fall. You need to go through this whole story of cool looking foxes and rabbits. And all just to scream for like ten seconds.

Mind you, I did not want to put up with lots of cool looking things for ten seconds of fear either.

However, when Brian, Mike, and Erin went back to ride it later. I waited for them and watched a parade. We all won!

I also went on this ride on my trip to California. I really enjoyed the jokes and the puns. But I also did not know that was the experience. Now, I know that this Magic Kingdom ride is where the most sarcastic Disney employees get to play. 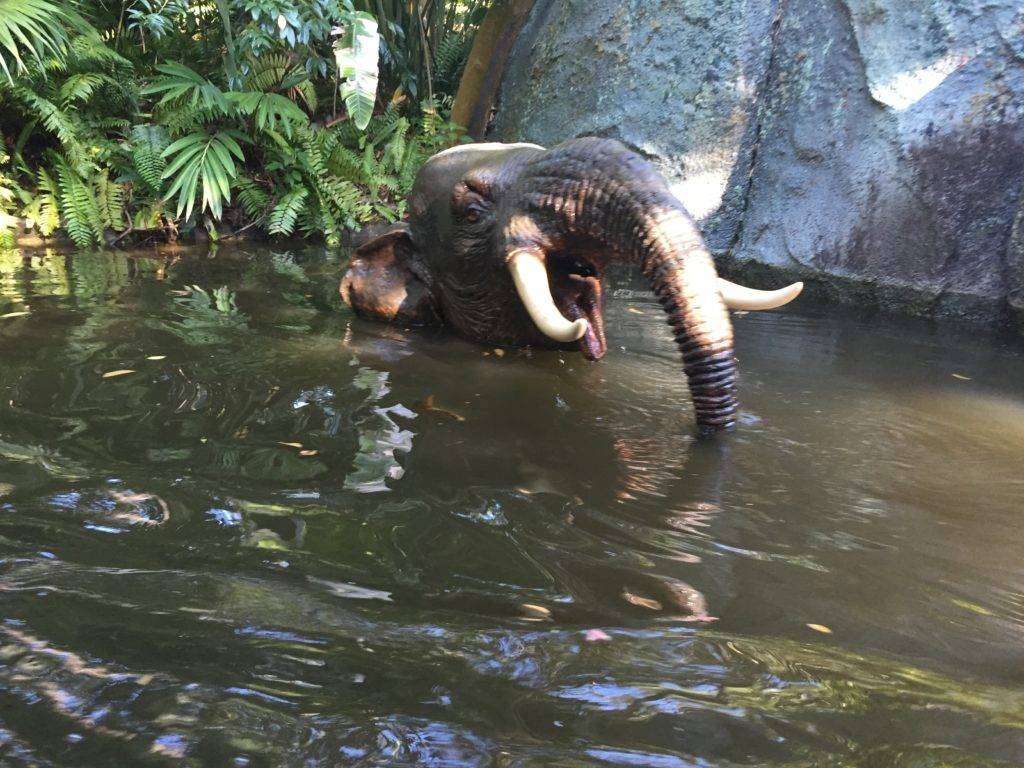 Disney has a lot of boat rides. I cannot imagine that people get thrills out of this. A lot of this seems to be nostalgia. But it’s fun.

Pirates of the Caribbean

Another boat ride. As you climb into these boats, you know what you’re getting into. A lot of animatronic pirates will act strangely. When you sit and watch any of these rides, you really need to just get in the mood. And with this, it’s funny. I’m not a Johnny Depp fan, so seeing his goofy face over and over again did not make me smile. But if I ignored him, so much more shows up.

I would imagine most people have no idea what this is, but it’s a nice break spot. You just walk on your own all around a model of their treehouse. It also has some great views of the park from the top.

One of the rides we wore out was the Haunted Mansion. In addition to a fun line to stand in, you cannot complain about an air-conditioned ride of horrors. Each of the little rooms that you go through made me smile. I think one of the best parts of DisneyWorld is that you get to spend so much time with people you like – between the lines and sitting in a little car. Since I don’t like roller coasters, these rides make the trip great. 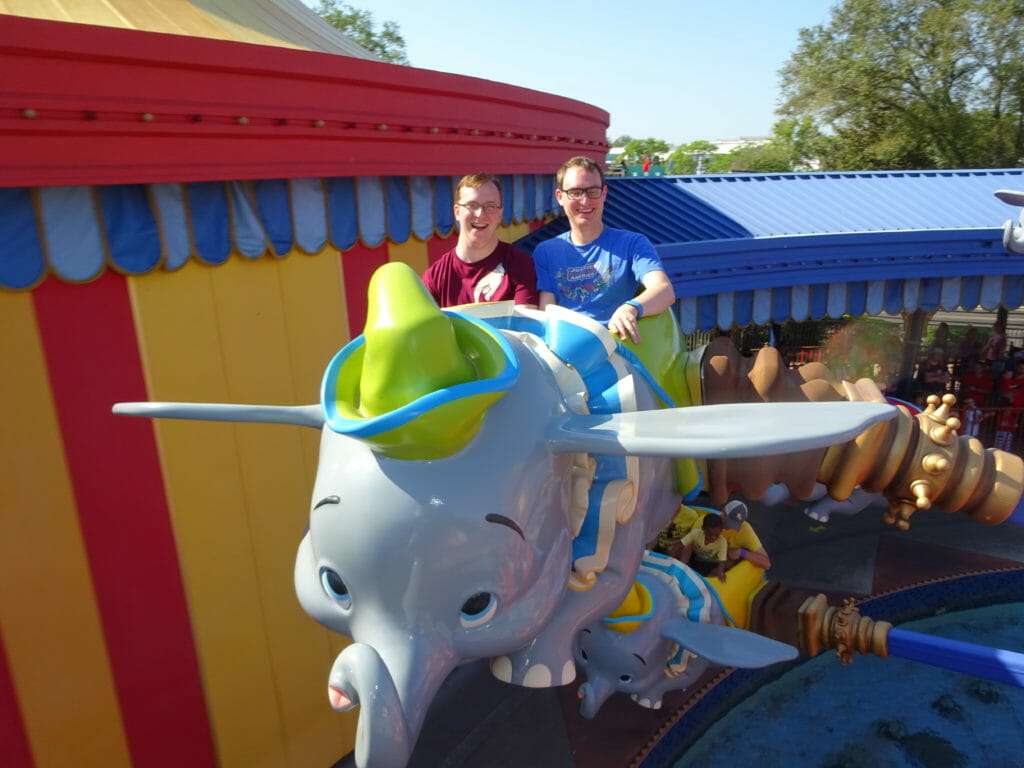 Erin loves this ride a lot, but I think we rode it just enough times that Brian began to go crazy. Generally, all I wanted to do was drink the water and become the Lizard Queen. Never happened. However, there are so many little things in this ride. We probably rode it five times and each time we experienced something a little different – not because anything changed but because it is too much.

The only bad thing was that in front of us on one of our trips, two parents had their phone up the entire time to film their tiny baby’s reaction to all of the colors and lights. Having a light shining at us was annoying and so I tried my best to ruin their video. If you are a parent, please do not do this. You do not need to experience the ride through your child’s reactions. And YouTube definitely does not care.

Erin and I let Mike and Brian spin. 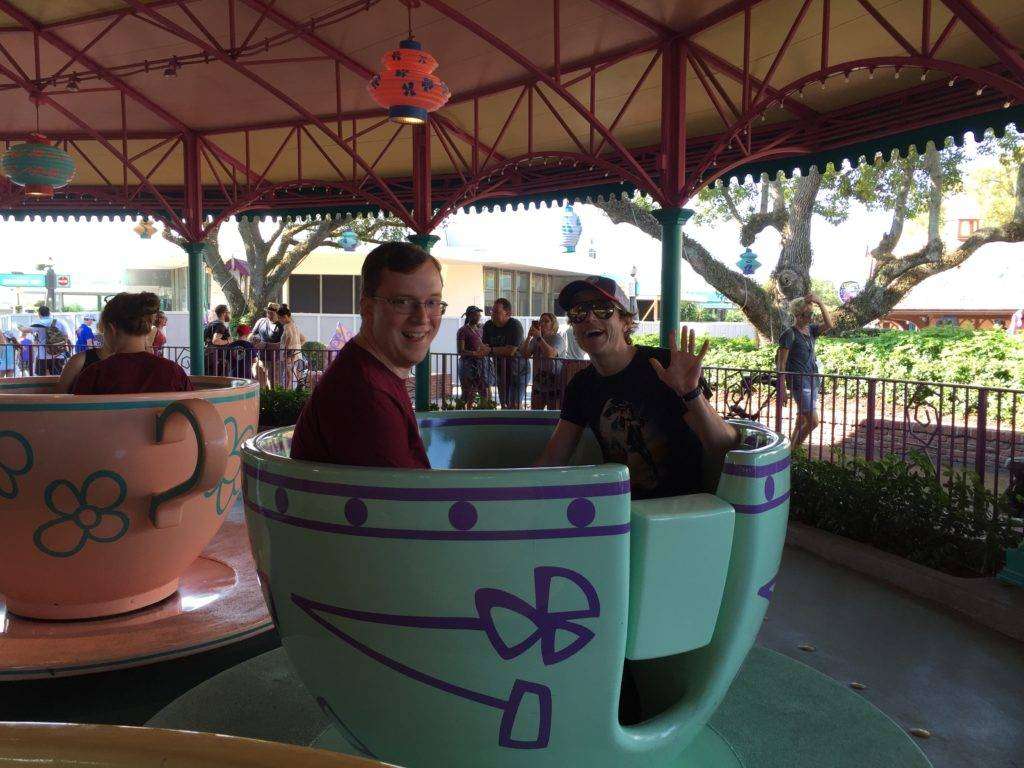 And we enjoyed a pleasant ride. 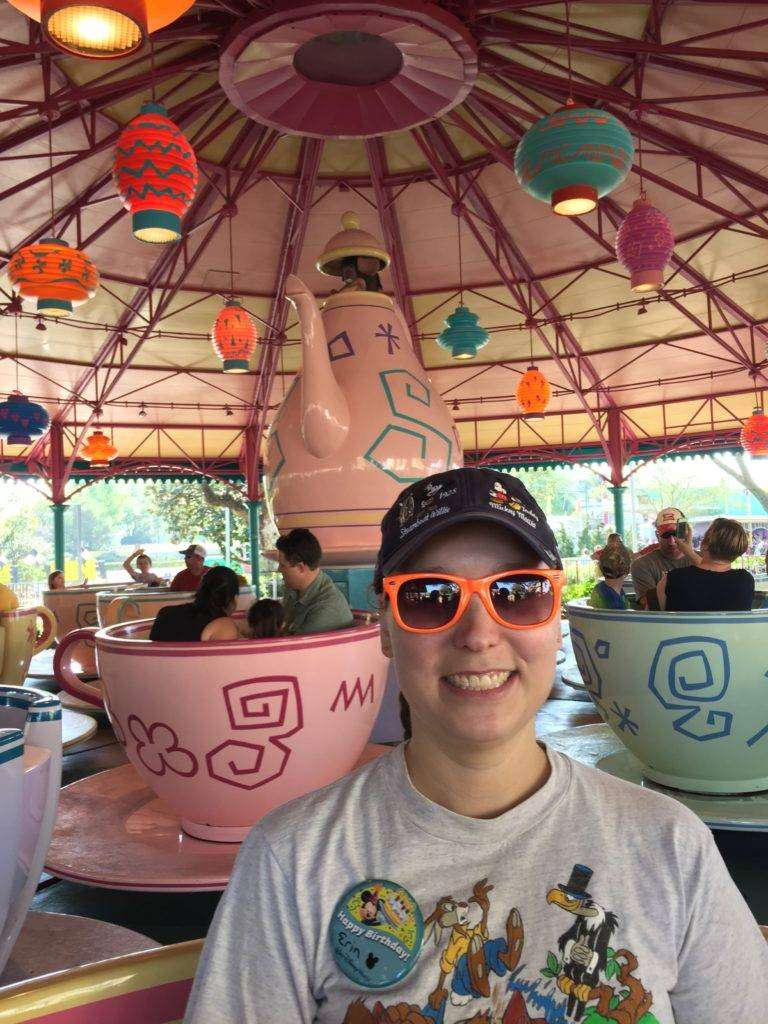 An enjoyable show – mainly because I really like Donald Duck!

I really do not know why the line for this ride is so long. It’s another story ride and you do fly through the pages of a book, but it is super short. Why is the line so long when the ride ends so quickly?

This ride is relatively new. The line was enormous and it moves incredibly slow. Much like Peter Pan, it is very short, but it’s an old-school roller coaster. But I was not too afraid. All of the interior characters and art truly look amazing. But hopefully whenever we go back, it won’t be so hard to get onto it.

The Many Adventures of Winnie the Pooh

I love Winnie the Pooh. As a boy who carried a puppet dog with him everywhere he went, the story of Christopher Robin and his friends appeals to me. However, the line for this ride may have been the worst. At one point, we got stuck near a series of “bee hives” that you could push bees through and it would buzz. Kids love it and most likely the buzzing noise that eminates from the hives do not ring through their heads. It rang through mine and still does when I get tense.

Otherwise, the ride walked through the Winnie the Pooh movie with some cute animatronics. 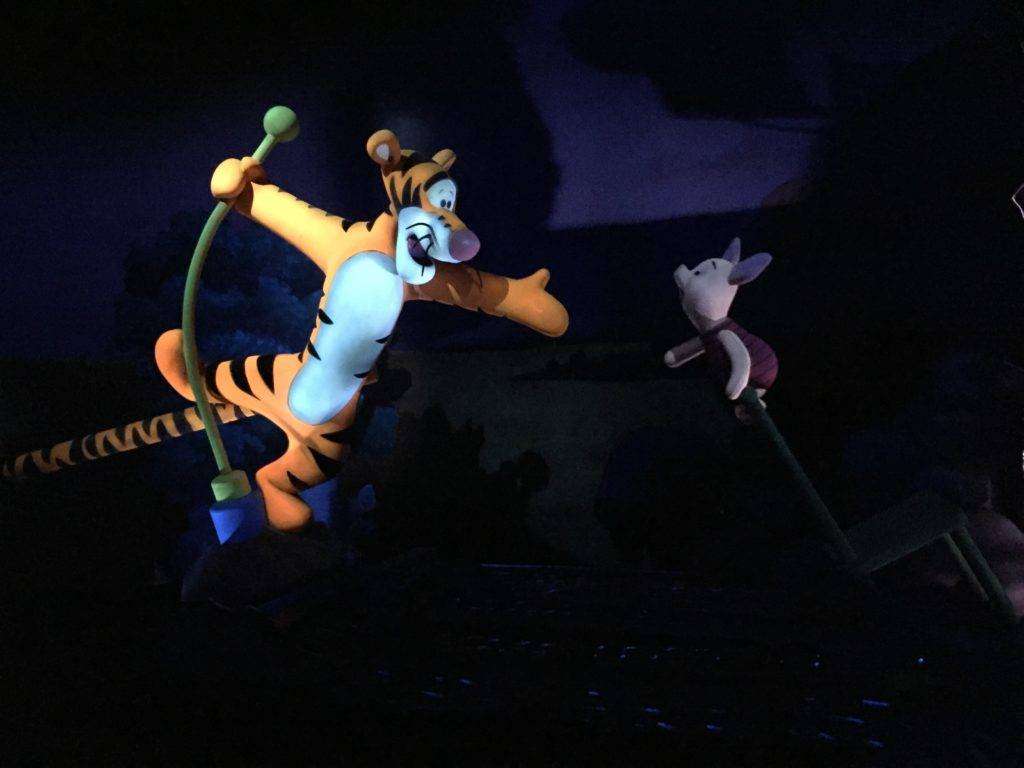 Under the Sea: Journey of the Little Mermaid

I believe this was the ride we rode the most – mainly because the first night we were there, no one was in line and we just went over and over again.

I was utterly terrible at this game. You sit in a car and shoot targets for points. I never did very well. I don’t think I understood what I was supposed to shoot at. But Mike was awesome, Erin slightly less awesome, and Brian did way better than me.

The first time we went into this exhibit, it was full. And funny. The fact that the writers can get jokes crafted so quickly truly makes this show fun. But the second time, we went during the fireworks display because we wanted to be part of the show.

We were. Mike got called out to dance and boy did he dance. And dance and dance. I also got called out for looking like another white guy with big glasses. I didn’t get to meet my fake brother but I’m sure he was the jerk I imagined he was in my role as angry older brother.

It wasn’t really dark for some reason. It also does not seem to have been built for anyone over six feet tall. I really have ended up not liking roller coasters as I age. But Mike and Erin were able to go later after we left for the night.

I wanted to explore all of Tomorrowland and though this ride is a bit silly, it truly seems like Yesterdayland now. You get a little bit of a behind-the-scenes look at all of the rides and exhibits. It was as close as I want to get to the weird Incredibles Dance Party.

Brian and I wanted to find a place to relax in some air conditioning. We did not know we would get stuck for several rounds of the same story from the animatronic man and his dog. By the third time that the robin began to chirp, people were ready to revolt. I had never been so scared in a room full of strangers with happy music playing.

Be Our Guest Restaurant

Eating in DisneyWorld can be tricky. A lot of it really doesn’t jump out as overly interesting – unless you want to set up reservations. But Erin knew about this Beauty and the Beast themed restaurant where you basically order sandwiches and they bring it out to you. It’s a pretty neat place with lots of beautiful decorations. And we got a cupcake with the gray stuff on it (and it was delicious)! 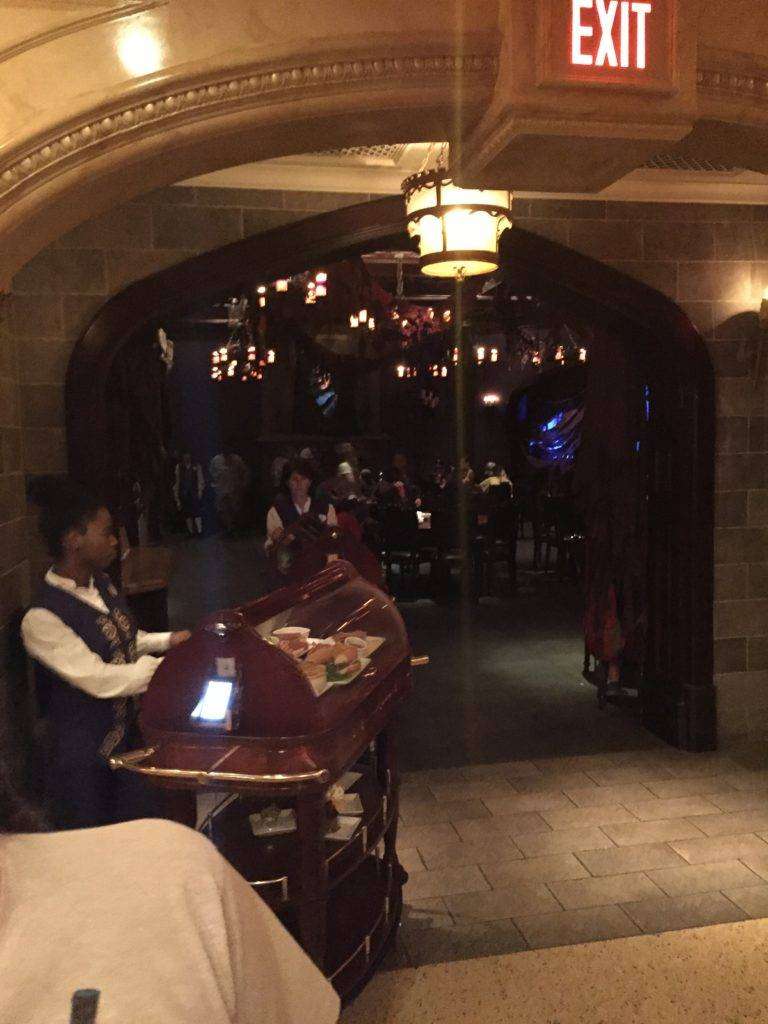 I think I look a bit like human Lumiere here… 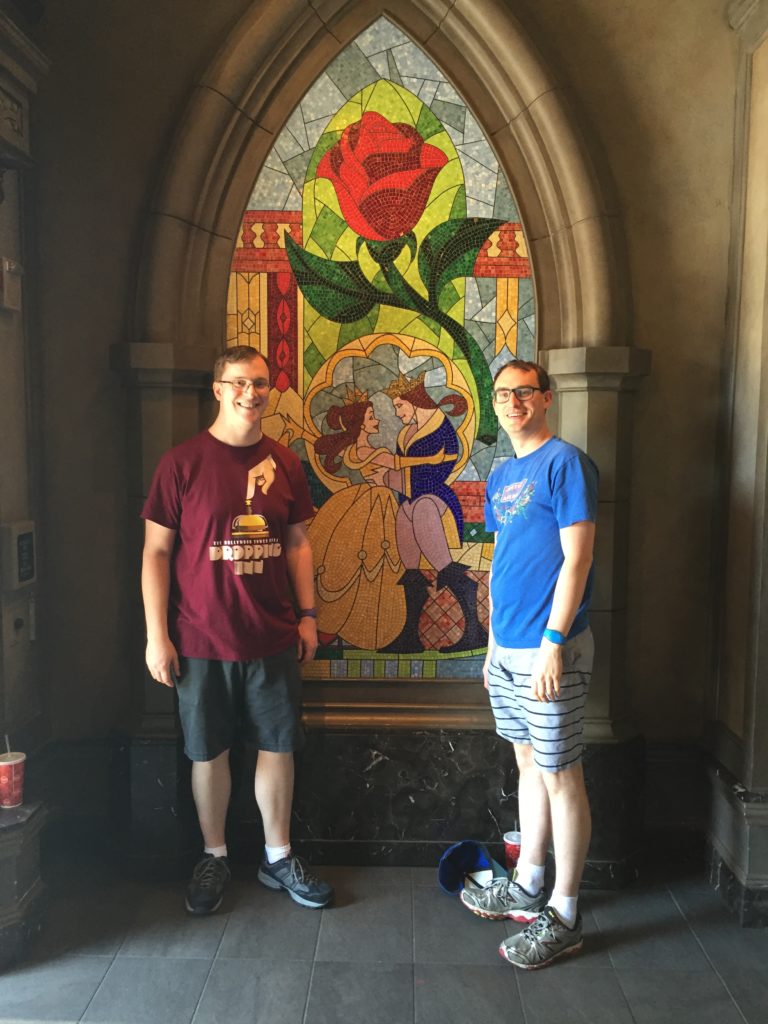 I just cannot believe the amount of time one spends sitting in a ride going around in a circle. It definitely has an old feeling to it. But every year, millions of people show up to ride all of these rides.

But I could not a more fun vacation with good friends. Lots of life is hard and comes at a cost, but it helps to go places with people you love. I recommend DisneyWorld but I think I recommend vacations with friends more. The Magic Kingdom truly shines.