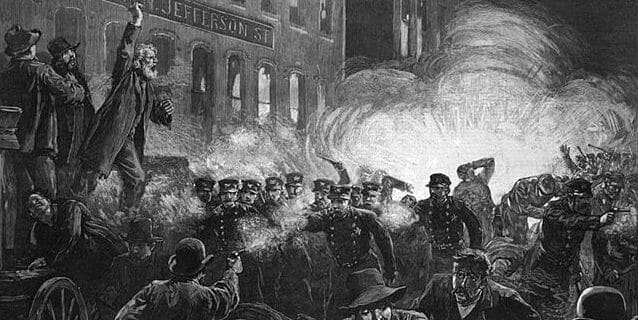 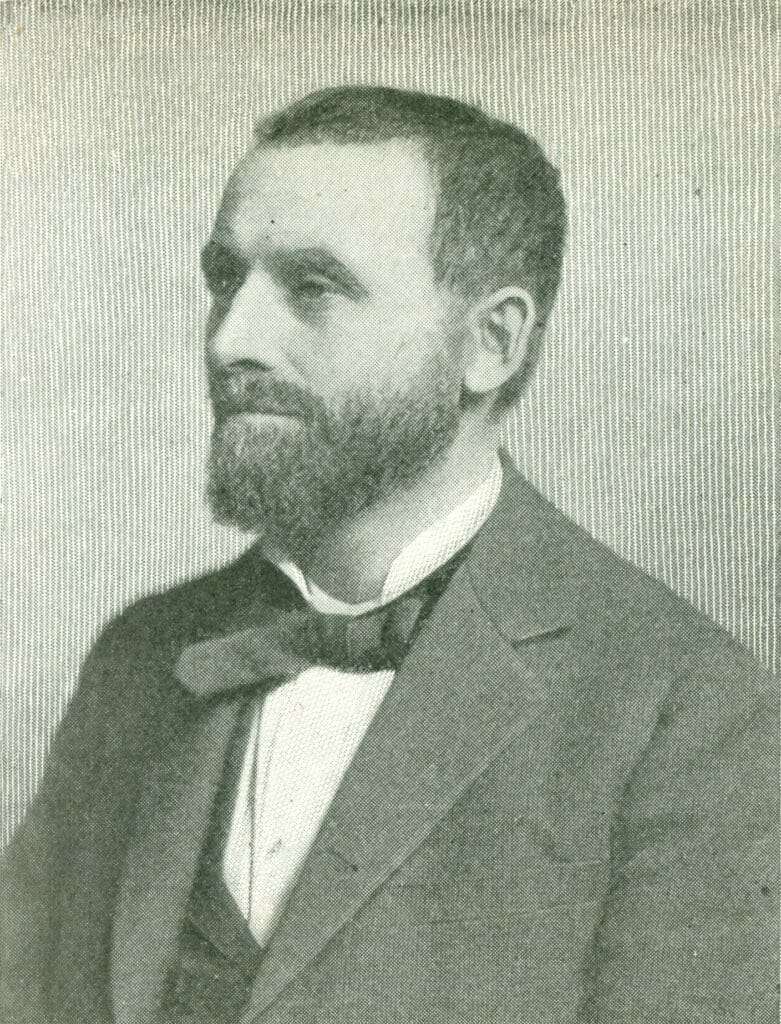 In 1886, Chicago suffered from poor working conditions. A movement began to introduce an eight-hour work day, which we all take for granted today. Although state and federal law mandated an eight-hour workday, the government did not enforce it. And employers asked employees to sign waivers. So, workers began to demonstrate.

Lucy and Albert Parsons organized several of these demonstrations. While Albert worked in Ohio, Lucy staged a peaceful march of 35,000 workers. However, on May 3, a bloody encounter took place between the police and the protestors. Several workers were killed. The attack led to a protest meeting planned for Haymarket Square. 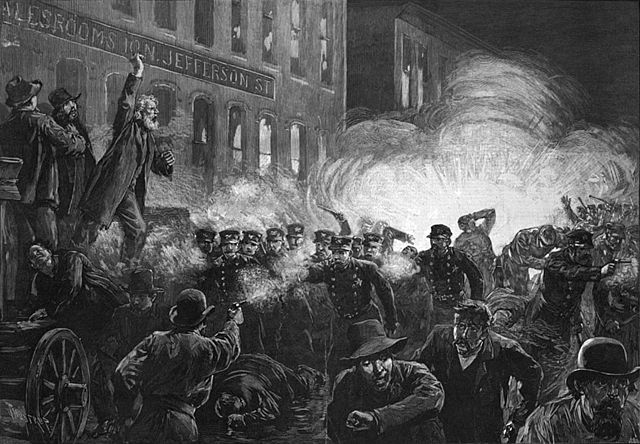 The meeting was orderly and the Chicago mayor attended. However, someone threw a bomb that killed several policemen. Eventually, seven policemen died, only one directly accountable to the bomb. Four workers were also killed. And with the events, anti-union activists took over. Police rounded up labor leaders, even outside of Chicago. Eight men from different parts of the labor movement were tried.

The judge, Joseph E. Gary, allowed men who had already decided on a guilty verdict to sit on the jury. On August 20, 1886, the jury reported its verdict of guilty with the death penalty by hanging for seven of the Haymarket Eight, and 15 years of hard labor for Neebe.

In one of his first acts when the voters of Illinois elected him, Governor Altgeld pardoned the three remaining living members of the Haymarket Eight.

According to Justice Douglas, Altgeld found that the jury which convicted the men had ben ‘packed.’ Little evidence existed to connect the men with the crime. They had made incendiary statements and had potentially been anarchists. But no proof existed to show they were bombers.

However, the pardon ruined Altgeld’s political career. “The man who had the courage to give a despised minority the protection of the Bill of Rights was hounded to his death.” He even became the main target to defeat William Jennings Bryan on the Democratic ticket and Teddy Roosevelt attacked him.

Altgeld died in 1902 at the age of 54. His law partner, Clarence Darrow, eulogized him.

“My dear, dead friend, long and well have we known you, devotedly have we followed you, implicitly have we trusted you, fondly have we loved you. Beside your bier we now must say farewell. The heartless call has come, and we must stagger on the best we can alone. In the darkest hours we will look in vain for your loved form, we will listen hopelessly for your devoted, fearless voice. But, though we lay you in the grave and hide you from the sight of man, your brave words will speak for the poor, the oppressed, the captive and the weak; and your devoted life inspire countless souls to do and dare in the holy cause for which you lived and died.”

We Need a Governor Altgeld

We need far more politicians and leaders today who put their political career behind the power of justice. Forget whether they worry about the poor, the oppressed or the weak. Currently, we have an entire political party that will not stand up to a bully who treats anyone who disagrees as a mortal enemy. It does not take much to see a country where a despised minority loses the protection of the Bill of Rights. Muslim immigrants again become a potential political weapon as we deny the ability to practice their own religion and feel welcome in the United States. Where are our Altgerds because we need them?

Justice Douglas and Carl Sandburg attended a dinner in Chicago to honor the 100th birthday of Governor Altgeld. Sandburg read Vachel Lindsay’s poem The Eagle That Is Forgotten, which eulogizes Altgeld. Douglas notes that Sandburg’s voice cracked while reading the poem. Sandburg explained his feelings to Douglas (An Almanac of Liberty, 376):

When the four anarchists were hanged on November 11, 1887, I was a boy in Chicago, nine years old. When I heard the news, ‘Well, they hanged ’em,’ I felt good. I felt as if Chicago had been saved from evil men. Six years later I read Altgerd’s pardon message and realized that the hanging of those men had been an act of great injustice – an act that could not be undone.

Tonight when I read The Eagle That Is Forgotten, I suddenly remember that as a boy I had been a victim of the frenzy of passion that swept Chicago in the ’80s. It was the awful realization that I had felt elated over an act of injustice. That’s why I chocked up on the radio and almost lost my voice.

In his book Carl Sandburg, Harry Golden noted that Altgeld had left a large shadow on the American political scene and on Carl Sandburg. Golden credits Altgeld with adding justice to our industrial society. Sandburg also noted that although the Supreme Court had been the ‘Bulwark of Privilege’ as a child, as an adult, he pinned his hope on the Supreme Court. He specifically became close friends with Justice Douglas.

I would imagine that Sandburg would not feel the same way as the Court drifts back to that Bulwark of Privilege thanks to liberal constantly ignoring the importance of the judiciary. Power really hates the people though as you can see in this political cartoon. Not only is Altgerd’s name on the sheet of paper in a Justice’s hand, but the Coxey Army rattled them. Of course, Justice Douglas did his best to get under the nose of all of the people who would have agreed with this cartoon because he could. And because he believed in liberty over anything else. 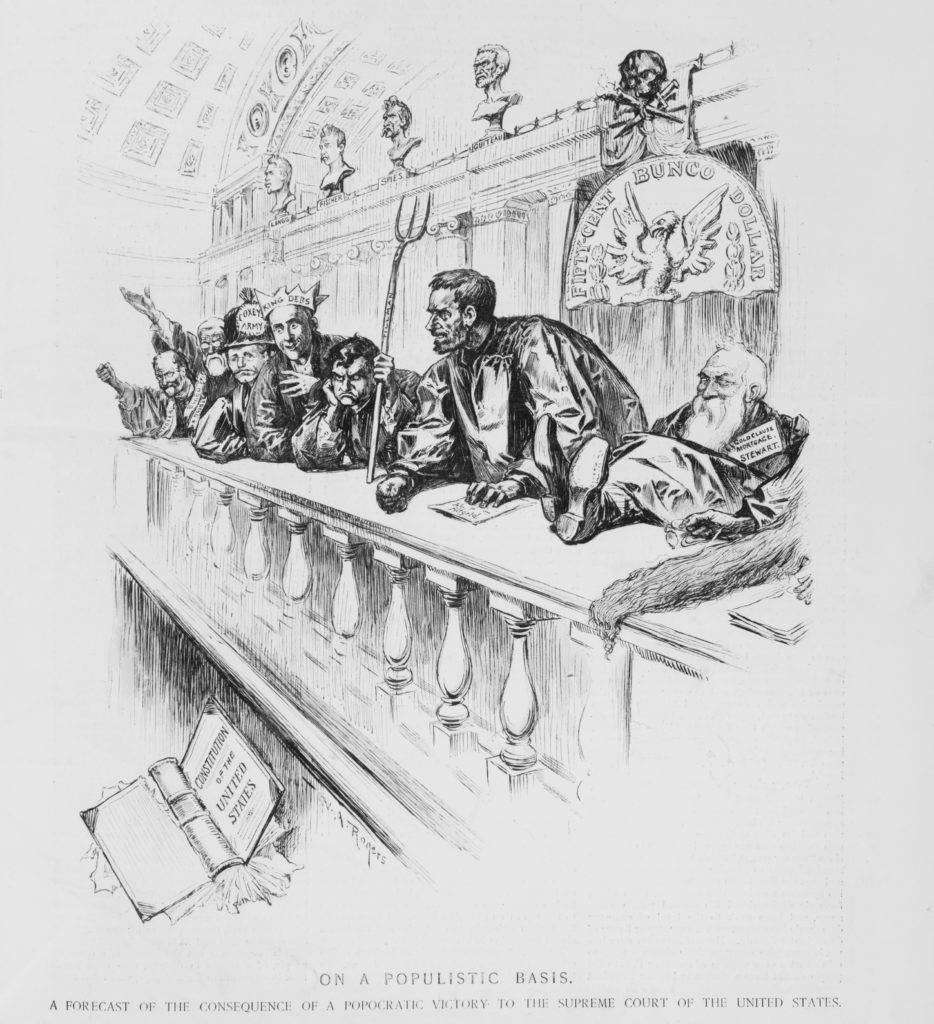 The Eagle That Is Forgotten