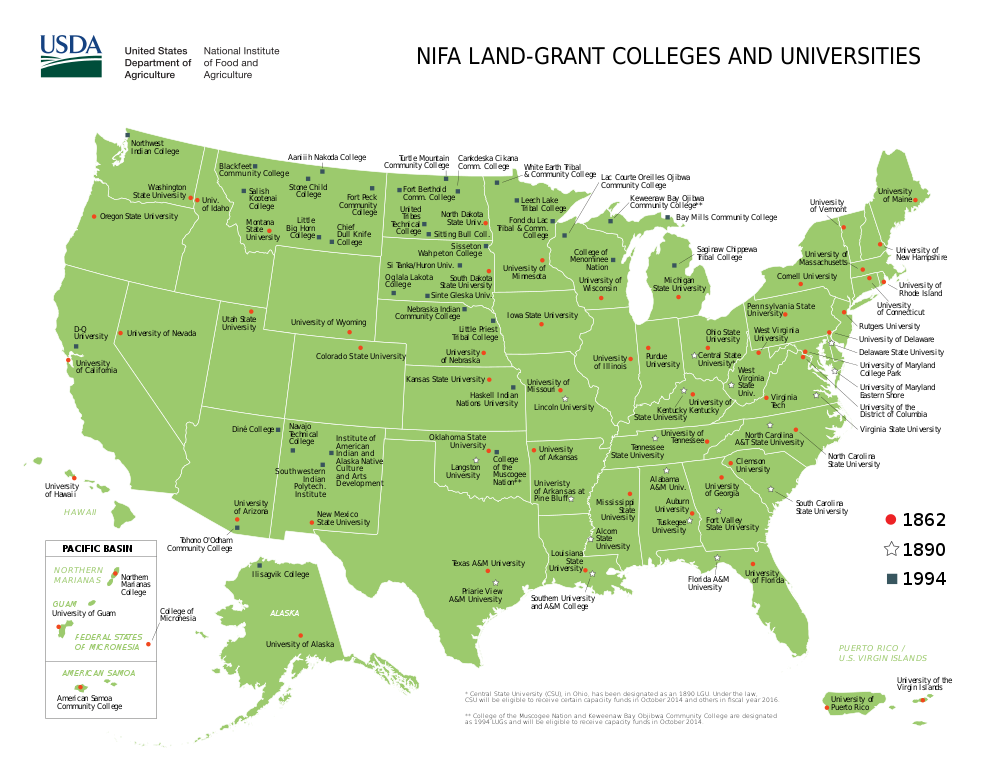 Our country has had a history at this point (as of 1862) of granting land to entities. First, we explored how townships had a designated public school component based on the Land Ordinance Act of 1785. Next, President Lincoln allowed any citizen to petition for 160 acres based on the Homestead Act of 1862. The last group of public land grants allowed for the construction of colleges.

Professor Johnathan B. Turner led a movement to create agricultural colleges. “We wish them to read books only that they may the better read and understand the great volume of nature ever open before them.”

The federal government could grant 30,000 acres for each Senator and Congressman in each state for at least one college. The leading objective of the schooling needed to be agricultural and mechanical arts to promote practical education. Approximately 13 million acres were granted to the state. To date, 76 land-grant colleges exist.

The goal of the program was to expand education. Congressman Justin S. Morrill stated that the existing university system taught the classics and left “farmers and mechanics and all those who must win their bread by labor to the haphazard of being self-taught or not scientifically taught at all.”

Do You Need to Go to College?

150 years ago, politicians saw a hole in our education system. It felt that the classics could bring up people through a liberal arts education, but what about practical information? As Congressman Morrill stated, some people needed to learn how to do the job they wanted and not just Shakespeare. Strangely, we continue to have this same discussion today, though land grant colleges barely get mentioned.

About once a week, some entity publishes and article about whether you need to go to college. We have all seen the numbers.  In 2014, the Economic Policy Institute found that college graduates earned 98% more per hour than non-college grads. But we need lots of different types of labor forces.

Imagine if our government put the time and energy behind funding schools to build the computers and robotic systems of tomorrow. If we put together a cash-based land grant, we could spawn new ways to educate that do not necessarily focus on the classics and allows the people to not just learn on the job. And some of these have sprung up from the private sector. Udacity, Coursera, edX, and a variety of other massive online college programs have begun to try to educate individuals seeking a different way. But they don’t have the funding of the government to help out.

But You Went to Ripon College…

Nonetheless, I am a product of a liberal arts education. I believe strongly that the classics have a place in everyone’s lives. We should not forget history or literature because it takes too much time. We build for the future based on investigating the past. However, not everyone has that built into them and they should not have to spend years jumping hurdles. Instead, the new systems should provide the classics as a refuge from their focuses. If you want to become a robotics expert, 75% of your class load should be based on that passion. But that 25% should cross-pollinate. How can literature or history help you build the world of tomorrow?

I truly love the idea of land grant colleges and prefer this over any idea of free college for all. If the government paid for these systems and programs, a minimal cost should have to land at the student’s feet. I do believe that if you have blood in the game, you try a bit harder. It just does not need to be both your liver and kidneys on the table.