Corporate Personhood, the Fourteenth Amendment, and the First Amendment 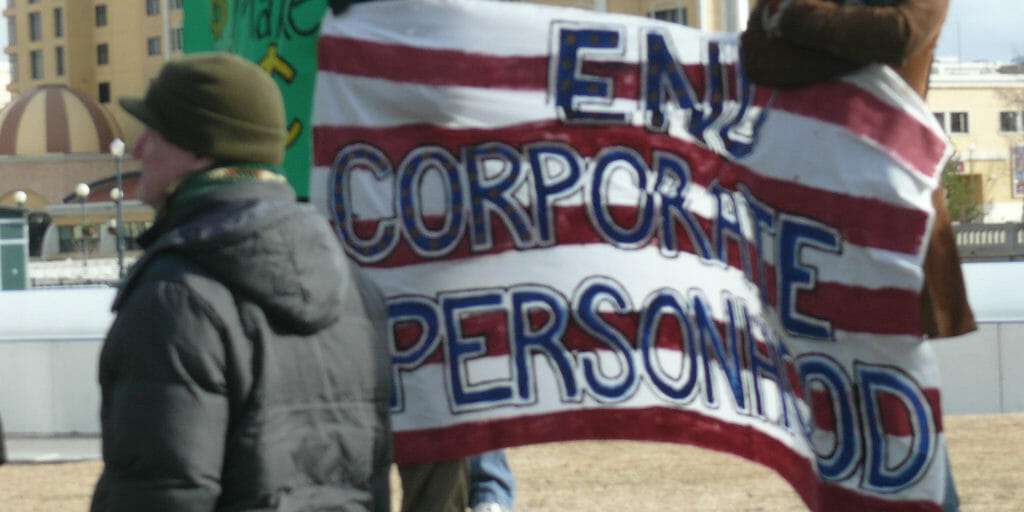 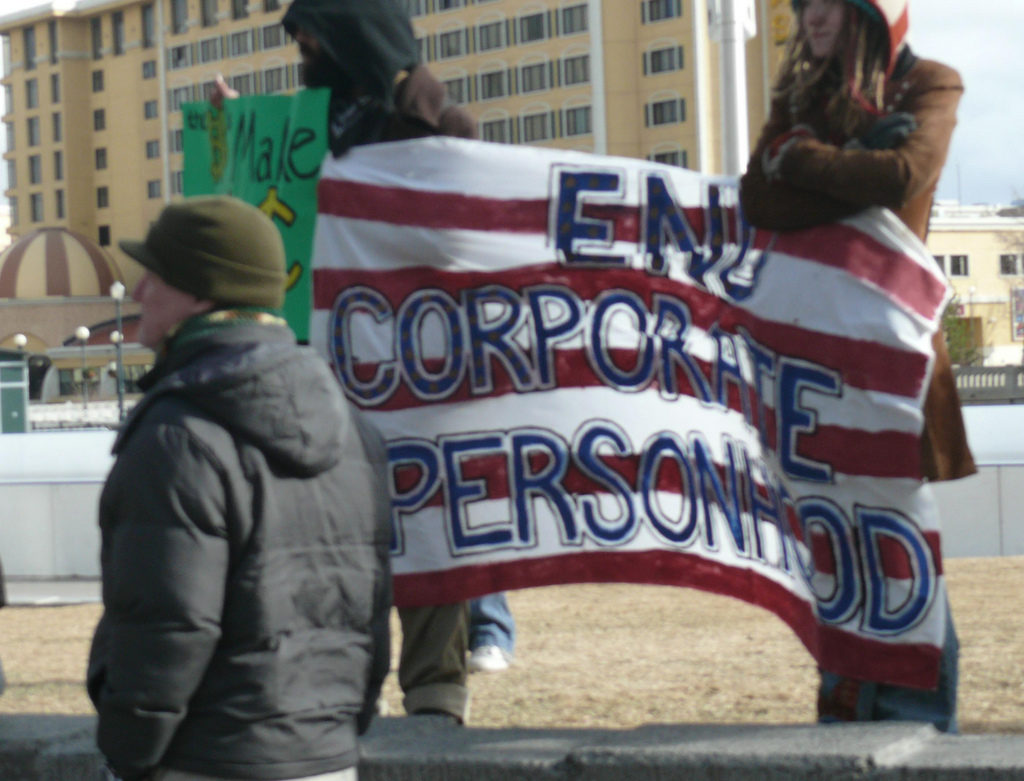 My Country – The Legal Fiction of Corporate Personhood

In An Almanac of Liberty, Justice William O. Douglas failed to see how this fit into the Fourteenth Amendment.

The Fourteenth Amendment says that’ persons born or naturalized’ here are ‘citizens.’ A corporation cannot be such a ‘person.’ The Amendment bars a State from abridging the privileges or immunities of ‘citizens,’ which again excludes corporations. The Amendment commands the States not to deprive ‘any person of life, liberty, or property, without due process of the law’ nor to deny ‘any person’ the equal protection of the laws. A corporation cannot be deprived of ‘life’ or of ‘liberty’ in the constitutional sense. Yet even though a corporation is not a ‘person’ for most purposes of the Fourteenth Amendment, it suddenly emerges as a ‘person’ when it comes to the protection afforded property interests.

Although he and Justice Black made such arguments in dissent, it never became the majority opinion. Little did he know how corporate personhood would shape our modern day system.

The county claimed to recover state and local taxes on multiple train companies. One of the points made by the defendants was that corporations are persons under the Fourteenth Amendment.

“Before argument, Mr. Chief Justice Waite said: ‘The Court does not wish to hear argument on the question whether the provision in the Fourteenth Amendment to the Constitution which forbids a state to deny to any person within its jurisdiction the equal protection of the laws applies to these corporations. We are all of opinion that it does.’”

And that was that. A headnote in a Supreme Court opinion became the law of the land.

Another taxation case involving a corporation brought out Justice Douglas’s barbs. Two corporations from outside of the Ohio paid all taxes required to do business in Ohio. Additionally, they paid the property taxes and any franchise taxes. The Ohio Tax Commissioner assessed ad valorem taxes on accounts receivable derived from shipments originating from Ohio manufacturing plants belonging to Wheeling Steel Corporation and National Distillers Products Corporation on the grounds that such accounts “result from the sale of property from a stock of goods maintained within the state.” The accounts receivable were not used in the conduct of the business of the corporations in Ohio, but in their general business. Accounts receivable of identical nature which were owned by residents and domestic corporations were exempt from the tax.

The Court held that the property tax assessed against the accounts receivable violated the Fourteenth Amendment. The Court noted that Ohio did not have to admit foreign corporations to do business within Ohio so long as any limits did not violate the Constitution. But because the corporations could conduct business in Ohio, Ohio could not discriminate between domestic and foreign corporations.

For anyone who wants to argue that we should not consider a corporation as a person, start here. Justice Douglas walks through the history of the Fourteenth Amendment and its jurisprudence.

He first points to Justice Woods (in an opinion as a circuit court judge), who denied corporate personhood:

This construction of the section is strengthened by the history of the submission by Congress, and the adoption by the States, of the 14th amendment, so fresh in all minds of as to need no rehearsal.

Next, he uses an opinion by Justice Miller in the Slaughter House Cases that noted the Fourteenth Amendment pertained to human rights.

But he also notes that although the Court has said this, it has never had to go so far. It has been able to find other rationales instead of personhood -until now.

Every one of our decisions upholding legislation as applied to corporations over the objection that it violated the Equal Protection Clause has assumed that they are entitled to the constitutional protection. But, in those cases, it was not necessary to meet the issue, since the state law was not found to contain the elements of discrimination which the Equal Protection Clause condemns. But, now that the question is squarely presented, I can only conclude that the Santa Clara case was wrong, and should be overruled.

If they want corporations to be treated as humans are treated, if they want to grant corporations this large degree of emancipation from state regulation, they should say so. The Constitution provides a method by which they may do so. We should not do it for them through the guise of interpretation.

As time goes by, it seems like we continue to use this guise of interpretation for no good. 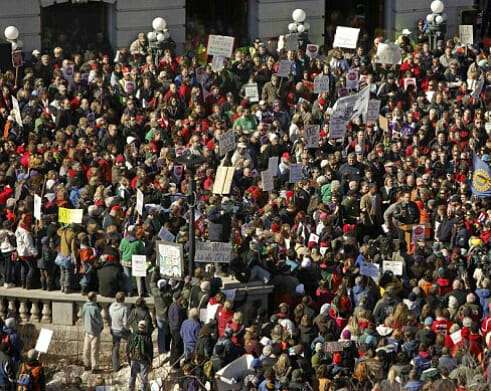 An Act of Congress prohibited corporations and labor organizations from making “a contribution or expenditure in connection with” any election for federal office. The next line of cases from here through Buckley v. Valeo to Citizens United v. Federal Elections Commission track a corporation’s rights to speech. The Court upheld the ban.

All contributions by corporations to any political committee or for any political purpose should be forbidden by law; directors should not be permitted to use stockholders’ money for such purposes; and, moreover, a prohibition of this kind would be, as far as it went, an effective method of stopping the evils aimed at in corrupt practices acts.

Dissenting from the Other Side

But Justice Douglas again dissented from the majority. However, this time he would have struck down the ban on corporations or labor organizations making political donations.

We deal here with a problem that is fundamental to the electoral process and to the operation of our democratic society. It is whether a union can express its views on the issues of an election and on the merits of the candidates, unrestrained and unfettered by the Congress. The principle at stake is not peculiar to unions. It is applicable as well to associations of manufacturers, retail and wholesale trade groups, consumers’ leagues, farmers’ unions, religious groups, and every other association representing a segment of American life and taking an active part in our political campaigns and discussions. It is as important an issue as has come before the Court, for it reaches the very vitals of our system of government.

Under our Constitution, it is We The People who are sovereign. The people have the final say. The legislators are their spokesmen. The people determine through their votes the destiny of the nation. It is therefore important—vitally important—that all channels of communication be open to them during every election, that no point of view be restrained or barred, and that the people have access to the views of every group in the community.

Some may think that one group or another should not express its views in an election because it is too powerful, because it advocates unpopular ideas, or because it has a record of lawless action. But these are not justifications for withholding First Amendment rights from any group — labor or corporate.

How can a corporation not have rights under the Fourteenth Amendment but can under the First Amendment?  Maybe it has nothing to do with corporate personhood. We may not need to get to the question of whether or not the the government can deny certain corporations life, liberty, or property. It’s a very thin line, though.

How can the government differentiate between a corporation, union, or other group of individuals? As a group of people come together, why can they not create political speech? Whether or not they should create unlimited or unfettered speech remains a different question. Justice Douglas has an incredibly strong point: if we try to quiet a group of people based on how they group together, are we infringing on their political speech? I argue yes.

Getting to Citizens United, we need to question whether or not corporate personhood truly becomes the issue. But if it does, we have a long judicial history to defeat.

Senator Bernie Sanders says on his website, “The Citizens United decision hinges on the absurd notion that money is speech, corporations are people, and giving huge piles of undisclosed cash to politicians in exchange for access and influence does not constitute corruption.” But none of that came out six years ago. Corporations became people under the Fourteenth Amendment years after its ratification. Speech has included money for almost the same amount of time. The only question left is the huge piles of undisclosed cash.

If we want to attack the issue, that’s the starting point.  But the other two aside. We cannot win those without a constitutional amendment.