Simon Fish, A Supplication of Beggars, and Sir Thomas More 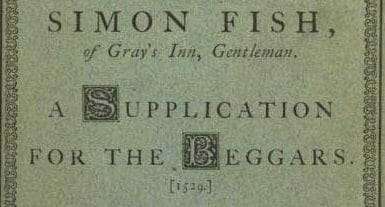 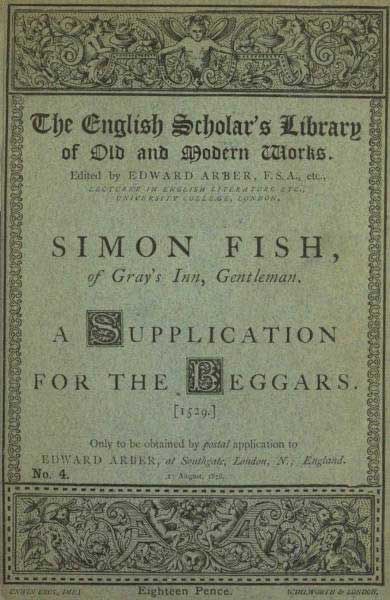 A major component of An Almanac of Liberty is British history, specifically religious history. Simon Fish wrote an attack on monasteries and the Roman Catholic Church. The tract was A Supplication of Beggars. Fish called the clergy “sturdy, idle, holy thieves.” He argued that they collected vast wealth for over 400 years through tithes and fees from church ceremonies. In a Bernie Sanders like gesture, he argued that the 1% (the clergy) owned 1/3 of the land. And he charged the clergy with immorality.

The political power weaved church and state together. And these arguments against the church’s wealth and power thrilled crowds suffering through economic turmoil in 1529. However, some argue that King Henry VIII may have read this pamphlet. It could have contributed to his decision to leave the Catholic Church.

Simon Fish argued that this land grab by the Church acted like a type of feudalism. Justice Douglas also argued that this feudalism remained in the 1950s. He pointed to portions of Asia and Africa where monasteries owned 90% of the land. He argued that these regions needed to have the same revolutionary talk that Simon Fish gave to England. In reality, it’s an important reminder of why we have the Establishment Clause. We do not want the state and church to conspire to become one. We do not want resources to become part of religion as religion hits a deep nerve for billions of people.

At this time, Henry VIII and Thomas Cromwell confiscated the property of monasteries. They took control of church land. “Following the closure of the monasteries, the power, land, idleness, recruiting of clergy, and wealth of the church were all severely diminished.”

Additionally, Saint Thomas More responded to Simon Fish with The Supplication of Souls. His basic argument focused on how the Church meant to do good, so that by having these resources, they could do good work.

Part of that good work was to ensure that people stayed out of Purgatory. “Fish charged that Masses and prayers for the dead diverted alms from the poor and he urged Henry VIII to destroy the priesthood, force priests to get married and get jobs, and thus eradicate Masses for the dead, for which priests received stipends.” 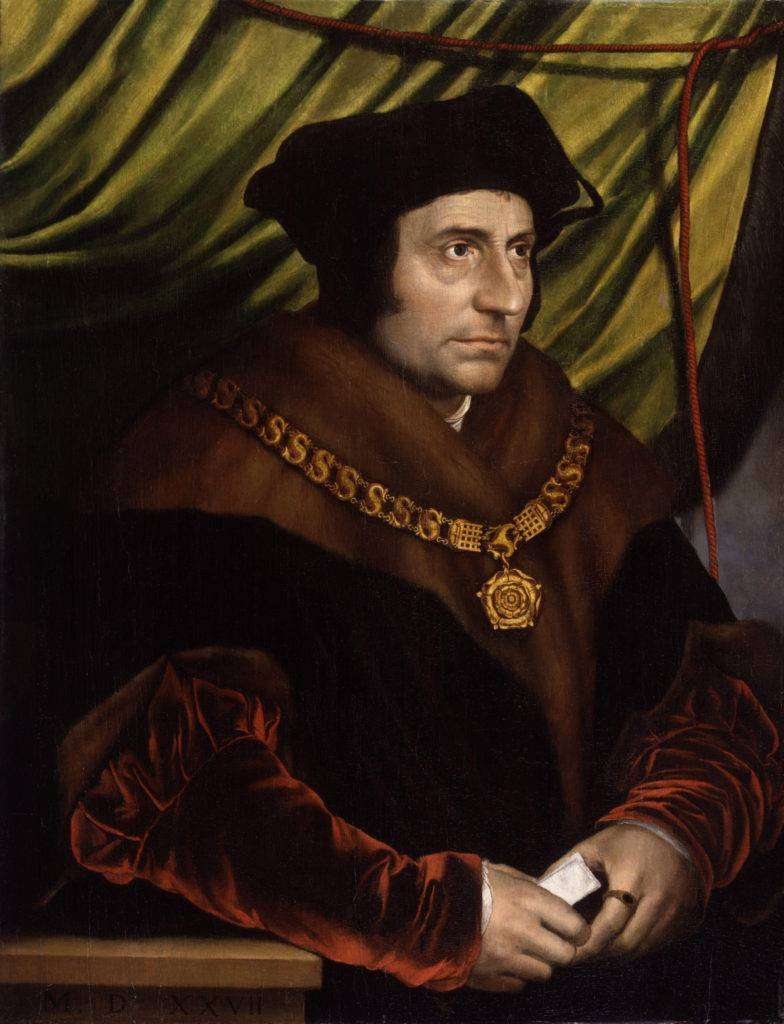 Of course, Thomas More ended up in the Tower of London, like so many other figures (Peter Wentworth, Sir John Eliot). More died. Fish’s critiques lived on through the Reformation.

My take-away here has very little do with Simon Fish’s writing as I could barely read more than 100 words. In this instance, you had a King who used the anger and passion of a man to take away land from churches. Whether or not that Catholic Church had too much money or too much power, a government should not entangle itself to correct that. Today, we have many preachers and religious figures who have too much money and too much power. They skate by with tax-free provisions to get what they want. But if they had to act in a way that the government wants, freedom of religion becomes smaller.

Recently, the Supreme Court heard the case Trinity Lutheran v. Comer. A Missouri church has challenged to its exclusion from a state program that provides grants to nonprofits to allow them to resurface their playgrounds with recycled tires. Based on our history of recent Establishment Clause cases, we have learned that anti-Catholic sentiment played a major role in not allowing public funds to go to parochial schools. Unlike what Walter M. Pierce did to Oregon schools and banning students to attend, this focused on money going to a playground.

But what if a church wants a historical building grant for its sanctuary? What if a church applies for an energy credit? Could the government demand a piece of church property for a public use through eminent domain? If the government can give funds, it can take.  It seems like we would want a church to be able to apply for public fund to fix up non-religious components of its property. Then we need to define the rule.

However, in reality, the church, like any other non-profit, could raise the funds from its members to improve the playground, if that playground seemed important to it.