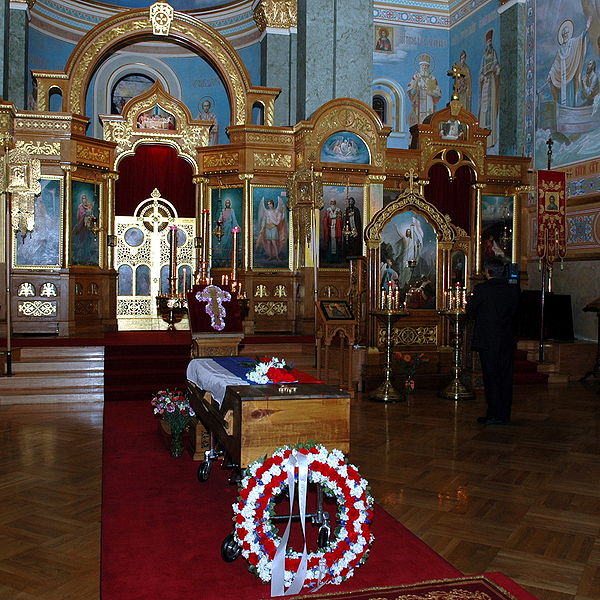 As Justice Douglas continues moving us through the choppy water of the history of church and state, he stopped in Louisville. But first, he notes another historical story where the state inferred with the church. Otto von Bismarck expelled Jesuits and purged Catholics who did not approve of his programs. However, he brought the light onto Kentucky

According to The Encyclopedia of Louisville, the Second Presbyterian Church organized in 1830 when 12 members left the First Presbyterian Church in Louisville. Two years later, 100 members attended the church on Third Street between Walnut (now Muhammad Ali Blvd.) and Chestnut. By 1850, female members of the church created the city’s first kindergarten and brought aid to the poor. By 1858, the church had 15,000 members.

Justice Douglas described a situation where slavery split the church. An anti-slavery group brought action to obtain possession of the church. In the end, the Court needed to step in (Watson v. Jones, 80 U.S. 679 (1871))

The members of the church called the Church Session, which consists of the pastor and the ruling elder and are charged with maintaining the “spiritual government of the congregation,” to decide if to call Reverend McElroy as their pastor. After a six month extension, the congreation asked the Session to not renew the engagement. However, the majority of the Session wanted to keep McElroy. By January 1866, the Session refused to open the church for a meeting, but on the sidewalk of the church, a majority of the congregation elected a new minister and additional ruling elders. However, the Session refused to accept the validity of this election.

Several court actions transpired to decide who could take possession of the church and which group had spiritual authority over the congregation.

By the end, the original Session voluntarily withdrew from the church and the Presbyterian Church as a whole.  And On June 1, 1867, Presbytery and Synod recognized by the original Church Session were declared by the General Assembly to be “in no sense a true and lawful Synod and Presbytery in connection with and under the care and authority of the General Assembly of the Presbyterian Church.”

At the core of these fights was the issue of slavery.

On April 15, 1872, the Supreme Court held that it would enforce the rights of members in the Presbyterian Church, temporal and religious, only in accordance with the rulings of the highest church judicatory. The General Assembly of the Presbyterian Church had recognized the anti-slavery group as the lawful Walnut Street Church, the Supreme Court accepted that decision. In the end, the Court in Watson v. Jones just asks for reconciliation between the two warring parties.

Eighty years later, a case similar to Watson v. Jones appeared before the Court. A corporation created by the New York Legislature to acquire a cathedral for the Russian Orthodox Church sued for the right to use and occupy a church in New York City. The fight was between the American branch of the Russian Orthodox Church and the Moscow patriarchate.

The issue was who was the head of the church – the elected Archbishop of the American branch or the man chosen by the Moscow hierarchy.

History of the Russian Orthodox Church

The Russian Orthodox Church became self-governing in the 16th century from the Orthodox Greek Catholic Church. As the power of the czars grew, so did the development of the church. It became a state church. By the 18th century, the church began missionary work and immigration brought the religion to the United States. In 1904, the diocese of North America was created and an archbishop was chosen from the Holy Synod of Russia.

However, the Bolshevik Revolution caused some problems. The Patriarch of the church was imprisoned, but died after being released. He had named three bishops for the patriarchal throne. One of these leaders named Benjamin as the Archbishop in question.

But the Russian turmoil had repercussions in North America. The now deceased patriarch granted a large measure of autonomy when the Russian ruling authority could not function. And in 1924, a temporary American administration was created. The New York legislation took place during this time.

The Court held that the legislature could not transfer the control of the New York churches from the central governing hierarchy of the Russian Orthodox Church to the governing authority of the Russian Church in America. The Court found the law violated the Fourteenth Amendment and free exercise of religion. Legislation cannot regulate church administration by requiring conformity to church statutes.

The Court used the opinion in Watson v. Jones to argue that the the law knows no heresy and does not support dogma. The right to organize voluntary religious associations was unquestioned. But the religious unions need to establish tribunals to decide questions arising among themselves, not bring it to civil court. The same held here. The church needs to figure this out on their own.

The Court also needed to deal with the legislature’s argument that they needed to act to limit Soviet interference. The Court held that though a cleric who undertakes subversive action may not be protected from the pulpit, no evidence existed that the Moscow patriarchate was using the New York cathedral in that fashion.

If the Court needs to become involved regarding church and state for the use of property, the church’s rule controls.

Frankfurter argues about the political entanglements of churches. He notes that historically, Americans may dislike the political motives of the homelands for a world religion. But in the end, religions survive, not dictators. “[U]nder our Constitution, it is not open to the governments of this Union to reinforce the loyalty of their citizens by deciding who is the true exponent of their religion.”

Jackson’s argument begins with examining who is the true archbishop and the grounds of the cathedral. He takes the appellant’s argument that the possession of property belongs to the archbishop.

Jackson does not think that the New York law was unconstitutional. Then, he argued it did not interfere with religious freedom because New York has not said that the Moscow appointed archbishop was not an archbishop. It only held that he cannot have that cathedral. However, he threw in a random line that “I think New York would agree that no one is more in need of spiritual guidance than the Soviet faction.”

New York has not barred this archbishop or anyone’s exercise of religion. The Soviet-controlled sect can exist. It just had to find a new home. In the end, this was only a property law question to Justice Jackson.

Political turmoil centered both of these cases because in the end, churches are political entities. The political sphere created a schism for the single Presbyterian church in Louisville in Watson v. Jones. Although it had other issues regarding its leadership, at its core, how it felt about the end of slavery focused their energy. And the Court had to stay outside.

As the Russian Orthodox Church had to face its future under Soviet rule, the Americans needed to understand how their church would survive. As they fought over who had the seat at the cathedral and New York got involved to stop Soviet influence, the Court needed to stay out.

If the Court started to decide how a church’s members or organization had to confront certain issues, the line between church and state would not only be about school prayer. The state needs to stay outside of the affairs of church as much as the church needs to stay away from the state. Politics and religion mix all of the time. But neither needs to tell the other what to do.