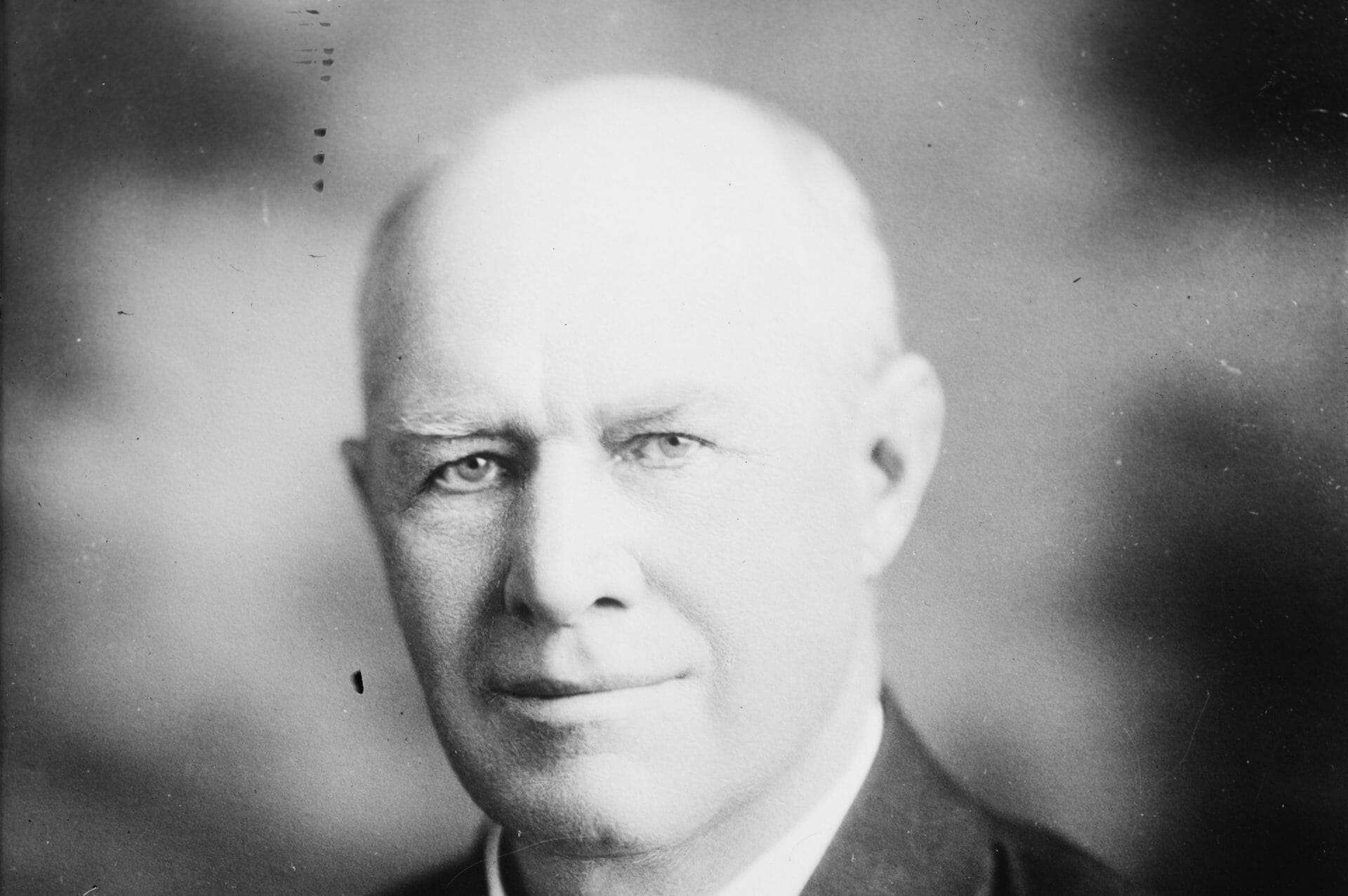 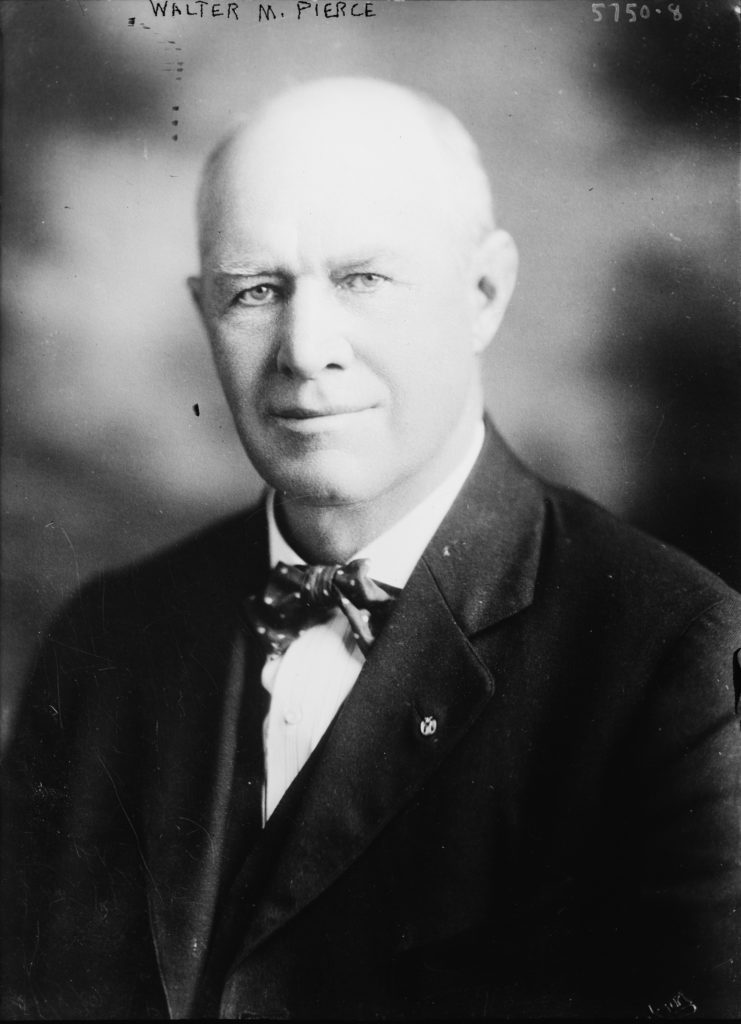 Although he rooted his 1922 run for governor in issues of public power, passing a state income tax, and reforestation, Pierce revealed his life-long nativism. He supported the Ku Klux Klan, which was gaining power in Oregon. Additionally, he backed  anti-Catholic Compulsory School Bill, a measure aimed directly at parochial schools. The law required every parent of a child between the ages of eight and sixteen years to send him to the public school in the district where he resides.

The Supreme Court held the law unconstitutional in Pierce v. Society of Sisters, 268 U.S. 510 (1925). For an unanmious Court, Justice McReynolds wrote that the law unreasonably interfered with the liberty of parents and guardians to direct the upbringing and education of children under their control.

The fundamental theory of liberty upon which all governments in this Union repose excludes any general power of the State to standardize its children by forcing them to accept instruction from public teachers only. The child is not the mere creature of the State; those who nurture him and direct his destiny have the right, coupled with the high duty, to recognize and prepare him for additional obligations.

Unlike the recent cases we looked at regarding church and state and prayer in public schools, the Court needed to tackle a prohibition on parochial schools.

Unfortunately, his anti-Catholic law was not the end of Walter M. Pierce and nativism. In 1923, he supported the Alien Property Act. The law targeted Japanese immigrants in Portland and the Hood River Valley and prohibited aliens from owning or leasing land. Pierce also supported the incarceration of Japanese-Americans after Pearl Harbor and campaigning in 1944 and 1945 against the return of Japanese citizens and aliens to their homes. Under the headline “Japs in U.S. Must Go” in the Japanese Exclusion League Journal, Pierce wrote:

In the half-century they have lived in the United States, they have never been part of community life, but dwellers in miserable “Little Tokyos” or slum farms. On Pearl Harbor Day there were thousands of them, born in the United States and living under the Stars and Stripes who could not speak or understand English.

We are white and Christian. They are yellow and do not accept Christianity. We believe in democracy and individualism. They are totalitarian and believe in the divinity of their emperor. Japanese are aggressive and ever plotting for racial supremacy. …There is room in the world for both of us, but not on this continent.

Not only does it ring of the words we hear about Muslim Americans today, but it remains part of the conversation for our politicians. As they speak to the most base of our fears and hatreds, we truly need to question these electors.

Justice Douglas had a sore spot for nature and conservation. Walter M. Pierce seems to have come onto Douglas’s good side based on his support of the Bonneville Dam. He introduced a bill on April 14, 1937, that granted a preference and priority to public entities to use the electricity generated by the dam. In fact, Pierce campaigned on public power for Oregon for many years.

Douglas recounts a story Pierce told him when Pierce owned wheat ranches. A stranger came to his ranch and said to Pierce, “You are heavily in debt.” Pierce replied by asking, “What business of yours is that?” The stranger told Pierce he could save his farms if he quit campaigning for public power. Pierce asked what would happen if he didn’t. The stranger told him he would lose his farm. Douglas then asked Pierce what he did. “I chased the guy off my place and kept talking about public power. I paid for it. In a few weeks they closed me out. Lost everything. Had to start again from scratch. I lost all my property for my convictions. But I didn’t stop fighting.”

How does Justice Douglas submit in a book about liberty the biography of Walter M. Pierce? Yes, he may have helped with conservation and public power, but he also had hate deep in his heart. His actions against immigrants and Catholics make most of the fears of our current administration seem small. How can we accept the good of an individual with the evil they may have caused?

Generally, I have read about this discussion often with culture. Can you hate the artist but love the art? We also have this discussion with politicians when they act inappropriately on one topic but we support their opinion on another.

I think here I would argue that Justice Douglas had it right when he talked about the stormy influence. First, he may have helped with creating public power systems in Oregon. And that seems beneficial to all Oregonians. Second, he created a fair tax code. Again, this seems beneficial to Oregon. Third, he barred students from going anywhere but a public school. I am a huge proponent of public schooling and believe that all kids should go to public school, but parents have the right to make that decision. Additionally, they should not be told by the government that they cannot make a decision.

Lastly, he hated immigrants. It comes out in his anti-Catholic school and Ku Klux Klan support. But he never turned his back on hatred of Asian immigrants. Many people started careers with racism as part of their platform, but they changed their tune. Walter M. Pierce doubled-down when he supported the Japanese internment camps and wrote an incredibly disgusting editorial.

It appears like Douglas corresponded with Pierce often in the 1930s and 1940s. I’m sure that worked out for him to enter this book on liberty. But I argue that our liberty is served better without memorializing figures like Pierce positively. Public power does not outweigh bigotry. I also think Justice Douglas would agree with that.