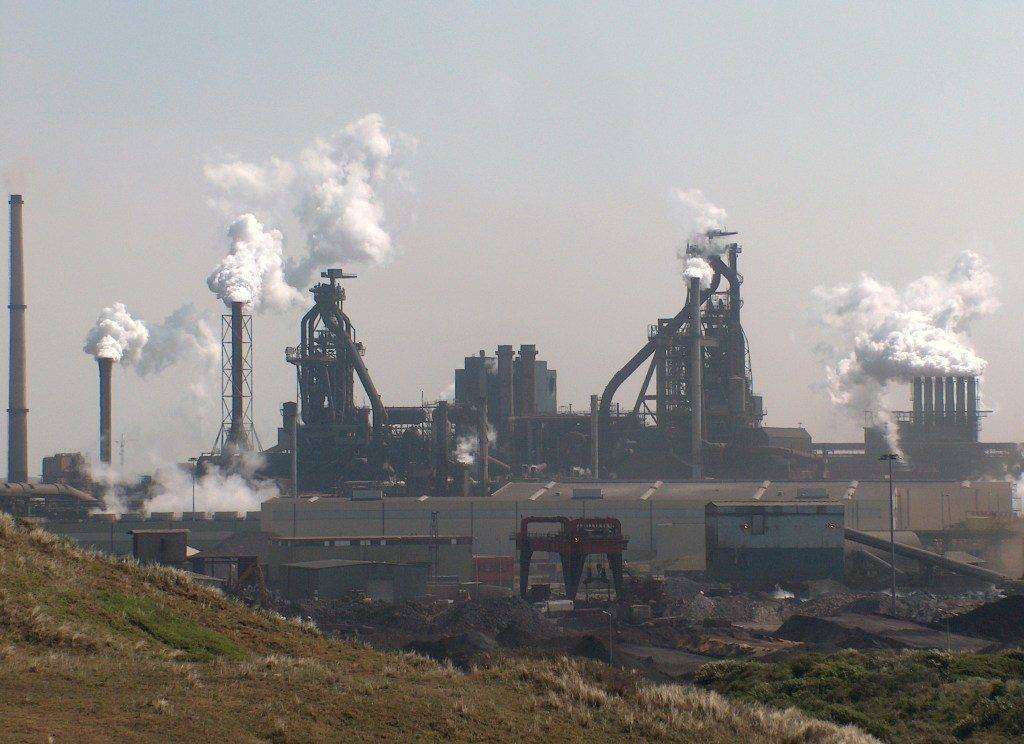 On April 8, 1952, President Harry S. Truman issued an executive order directing the Secretary of Commerce to take possession of most of the steel mills and nationalize them. The Supreme Court stepped in with Youngstown Sheet & Tube Co. v. Sawyer, 343 U.S. 579 (1952).

Background on the Steel Mills

In 1951 and 1952, the steel mills had concerns regarding their new collective bargaining agreements. They felt that during World War II, the National War Labor Board kept wages low. The group demanded a yearly cost-of-living adjustment for all contracts, productivity pay increases linked to the company profit margins, and price controls. However, to fight inflation, the Truman administration put restrictions on the economy. One of the restrictions included production quotas for all civilian steelmakers. Additionally, the steelmakers needed to sell the steel to the government, instead of the private sector, due to the Korean War.

The unions decided that instead of fighting company by company that they would attack the problem from the industry level. They wanted a pay increase in the 10 to 15 cents an hour range rather than the 4 cents an hour amount permissible by the Wage Stabilization Board. As the initial conversations went nowhere, the unions asked for more and the employers decided to provide less. As no middle ground could be met, the union leaders decided on a new tact. On April 4, 1952, the Union gave notice of a nationwide strike called to begin at 12:01 a.m. April 9.

President Truman announced in a national television and radio address that he had issued Executive Order 10340.

The Secretary of Commerce is hereby authorized and directed to take possession of all or such of the plants, facilities, and other property of the companies named in the list attached hereto, or any part thereof, as he may deem necessary in the interests of national defense; and to operate or to arrange for the operation thereof and to do all things necessary for, or incidental to, such operation.

Truman argued that the seizure of the steel mills was necessary to keep American troops in Korea. Additionally, to maintain the economy and other defense efforts, steel mills were important.

The Secretary of Commerce issued orders that directed the steel mills to carry on their activities.

“Twenty-seven minutes after the conclusion of Truman’s speech, attorneys for Republic Steel and the Youngstown Sheet & Tube Company arrived at the door of United States district court Judge Walter Bastian, papers in hand demanding a temporary restraining order preventing the seizure. Bastian refused to rule without hearing from the government, and set argument for April 9 at 11:30 a.m.”

On April 30, the District Court issued a preliminary injunction restraining the Secretary of Commerce. The Supreme Court granted cert on May 3 and heard arguments on May 12. The opinion was released on June 2.

Justice Douglas called the decision the most important one in our history regarding separation of powers. Additionally, he added its importance in regards to the Court’s role in enforcing that separation.

The Supreme Court held that President Truman’s action was unauthorized. Congress had set up conditions for seizure of plants, but none of them were met. The government conceded that point as the conditions were too cumbersome.

Therefore, the authority needed to come from the Constitution. The government argued he had this power under the Commander-in-Chief role. However, the Court disagreed. The Court noted that although the theater of war concept has expanded, they could not find that the Commander in Chief had the “ultimate power to take possession of private property in order to keep labor disputes from stopping production.” They stated that job stayed with Congress.

The Founders of this Nation entrusted the lawmaking power to the Congress alone in both good and bad times. It would do no good to recall the historical events, the fears of power, and the hopes for freedom that lay behind their choice. Such a review would but confirm our holding that this seizure order cannot stand.

Justice Frankfurter opined on the joys of checks and balances. He noted that our government system is hard and that it requires “knowledge and wisdom and self-discipline for the achievement of its aims.” He explained that our founders did not expect that we were immune from dictators or concentrated power. He also explained that the concentration of power did not happen overnight.

The accretion of dangerous power does not come in a day. It does come, however slowly, from the generative force of unchecked disregard of the restrictions that fence in even the most disinterested assertion of authority.

Justice Douglas, like Justice Black, takes an incredibly absolute view on this. Check and balances says no – absolutely not. He noted that the Presidency is not a weak office. The President represents the people as their spokesman in all domestic and foreign affairs. He notes the uniqueness of its leadership position.

But he notes that the philosophy of the President and this power needs to be thwarted by Congress sometimes. That the slowness of the legislative process  creates an inherent risk but also to save the people from autocracy. “The Framers with memories of the tyrannies produced by a blending of executive and legislative power rejected that political arrangement.”

We pay a price for our system of checks and balances, for the distribution of power among the three branches of government. It is a price that today may seem exorbitant to many. Today, a kindly President uses the seizure power to effect a wage increase and to keep the steel furnaces in production. Yet tomorrow, another President might use the same power to prevent a wage increase, to curb trade unionists, to regiment labor as oppressively as industry thinks it has been regimented by this seizure.

In his autobiography, Justice Douglas also notes that if a President can seize property, why can he not seize people or force them to fight for him? Property, life, and liberty are all equal in our system. In his concurrence, he focused on the Fifth and Fourteenth Amendment. He hated this idea of a Presidential war. We have lived with this concept since Truman as just this week, the President sent missile into Syria. And as many Senators noted – he did not have the Congressional authority to do that.

During law school, Justice Jackson’s concurrence became the portion we focused on. He laid out three paths for determining if the executive action was constitutional.

Jackson Interprets the Seizure of the Steel Mills

Justice Jackson argued that the seizure of the steel mills laid in #3. As the President relies on the war powers to justify his actions, Justice Jackson denies this flatly. He notes that Congress has the power to declare war. “But no doctrine that the Court could promulgate would seem to me more sinister and alarming than that a President whose conduct of foreign affairs is so largely uncontrolled, and often even is unknown, can vastly enlarge his mastery over the internal affairs of the country by his own commitment of the Nation’s armed forces to some foreign venture.” Don’t tell Justice Jackson about the last fifty years!

Justice Jackson concluded with a warning about the future of government:

We do not know today what powers over labor or property would be claimed to flow from Government possession if we should legalize it, what rights to compensation would be claimed or recognized, or on what contingency it would end. With all its defects, delays and inconveniences, men have discovered no technique for long preserving free government except that the Executive be under the law, and that the law be made by parliamentary deliberations.

Such institutions may be destined to pass away. But it is the duty of the Court to be last, not first, to give them up.

Two other concurrences and a dissent accompany this important case. The one that probably stung Truman the hardest was his former Attorney General, Justice Tom Clark. He argued Congress gave him solutions in regards to the steel mills and he ignored them. In other words, you had options, you took the easy path, so not going to happen.

The dissent focused on the crisis. They noted that they lived in extraordinary times, which need extraordinary measures. They argued that we were at war and had standards under the United Nations that we needed to meet. The steel mills and worker strike would mean we could not meet our requirements. They pointed out all of the historical extraordinary events that led to extraordinary actions by the President, which Congress did not expressly permit.

We live in the shadow of Youngstown. The Korean War was the first war to not be declared by Congress. An official declaration of war has not been issued since. Everything has been led by the President. “For example, when President Obama approved the use of military force in Libya in 2011, it was the 132nd time that a President acted under the conditions of the War Powers Resolution since 1973.”

On Thursday, April 6, 2017, President Trump said, in regards to his strike on Syria, “It is in this vital national security interest of the United States to prevent and deter the spread and use of deadly chemical weapons.” That’s the only rationale needed in today’s world.

Executive power has grown tremendously since Youngstown. But the case continues to be cited today, most recently in Medellín v. Texas, 552 U.S. 491 (2008). Even when no steel mills are involved!

However, the Supreme Court held that President Bush had no authority to order the state courts to reverse themselves, no matter what the World Court said. Chief Justice Roberts cited Youngstown. “The president’s authority to act, as with the exercise of any governmental power, ‘must stem either from an act of Congress or from the Constitution itself.’” Although the President had the power to make a treaty, Congress has the power to implement the treaty. Since this was not a self-implementing treaty, according to the majority, this did not fall within Justice Jackson’s first category. Instead, it fell to number three.

“The President may comply with the treaty’s obligations by some other means, so long as they are consistent with the Constitution.”

The dissent argued it fell into category #2. But either way, Justice Jackson’s standard for executive power has stood the test of time.