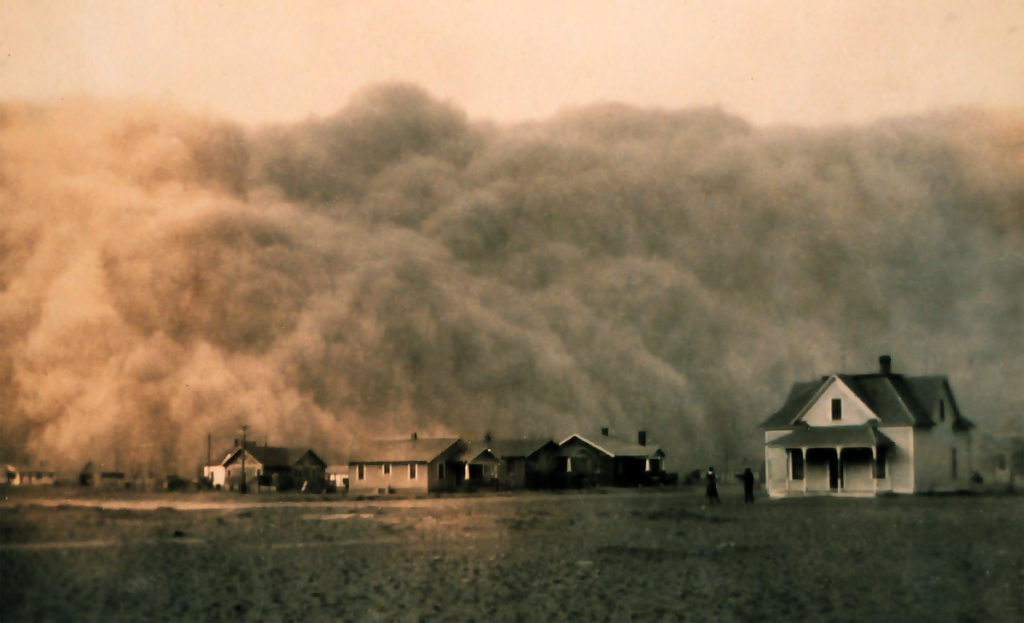 In the 1920s and 1930s, farmers accrued large amounts of debt. Farm prices feel as the industrial revolution increased manufacturing prices. Farmers found it impossible to pay off their mortgages.

As we noted yesterday, historically, bankruptcy was used to liquidate the assets of a debtor, distribute the proceeds, and discharge the debt. But the farmers needed to continue their businesses.

President Roosevelt wanted to improve farming conditions because he felt that this would increase the general outlook of the country. First, he created the Agricultural Adjustment Administration. The law reduced agricultural production by paying farmers not to plan on part of their land and to kill off excess livestock. Therefore, the price of crops would increase without a crop surplus. However, in 1936, the Supreme Court ruled the Act unconstitutional. The Court held that regulation of agriculture was a state power. Therefore, the federal government could not force states to adopt the Agricultural Adjustment Act.

The law stayed foreclosures and kept the debtor in possession for five years. Additionally, it would require the farmer to pay a reasonable rent while in possession. The farmer could also acquire the property by paying the appraised value.

A bank made a long-time loan of $10,000, interest at 6%, secured by mortgages on a Kentucky farm then worth presumably twice that sum. The bank was obliged by defaults to foreclose in a state court. However, the mortgagor refused the bank’s offer to take the farm in satisfaction of the debt. The farmer took took advantage of the Frazier-Lemke Act. The bank offered to pay into the bankruptcy court for the property over $9,000, which, if accepted, would have been returned to the bank in satisfaction of the debt. But this was refused because the property was appraised at $4,445. The Bank refused to sell the mortgaged property to Radford at the appraised value.

The Bank insisted that the Frazier-Lemke Act would transcend Congress’s bankruptcy power. They argued that to apply the rules under Frazier-Lemke to preexisting mortgages violates the takings clause of the Fifth Amendment of the Constitution.

The Court agreed that the Frazier-Lemke Act implemented an unconstitutional taking.

[F]or the Fifth Amendment commands that, however great the nation’s need, private property shall not be thus taken even for a wholly public use without just compensation. If the public interest requires, and permits, the taking of property of individual mortgagees in order to relieve the necessities of individual mortgagors, resort must be had to proceedings by eminent domain, so that, through taxation, the burden of the relief afforded in the public interest may be borne by the public.

Additionally, the Court noted that each of the previous national bankruptcy acts followed a major or minor depression, but that none had, prior to Frazier-Lemke sought to compel the holder of a mortgage to surrender to the bankrupt either the possession of the mortgaged property or the title, so long as any part of the debt thereby secured remained unpaid.

This decision was one of three that came out on the same day which dealt blows to the New Deal. As a major setback for the Roosevelt administration, they began their infamous court packing scheme, which luckily, went nowhere.

Wright, a Virginia farmer, gave in 1929 a mortgage deed of trust of his farm to secure a debt now held by the Vinton Branch of the Mountain Trust Bank. Frazier-Lemke had been modified, limiting the moratorium to a three-year period. “At the end of three years, or prior thereto, the debtor may pay into court, the amount of the appraisal of the property of which he retains possession, including the amount of encumbrances on his exemptions, up to the amount of the appraisal, less the amount paid on principal.”

The Court noted that after Radnor, Congress took special care to write a beneficial law for farmers within the confines of the Fifth Amendment. The Court held that the new provisions made no unreasonable modification of the mortgagee’s rights. By removing the absolute stay and replacing it with a three-year moratorium, no taking took place. A foreclosure would still take place after three years if the farmer did not comply. Again, Justice Brandeis wrote the majority opinion.

Congress renewed Frazier-Lemke four times until 1948, when it expired.