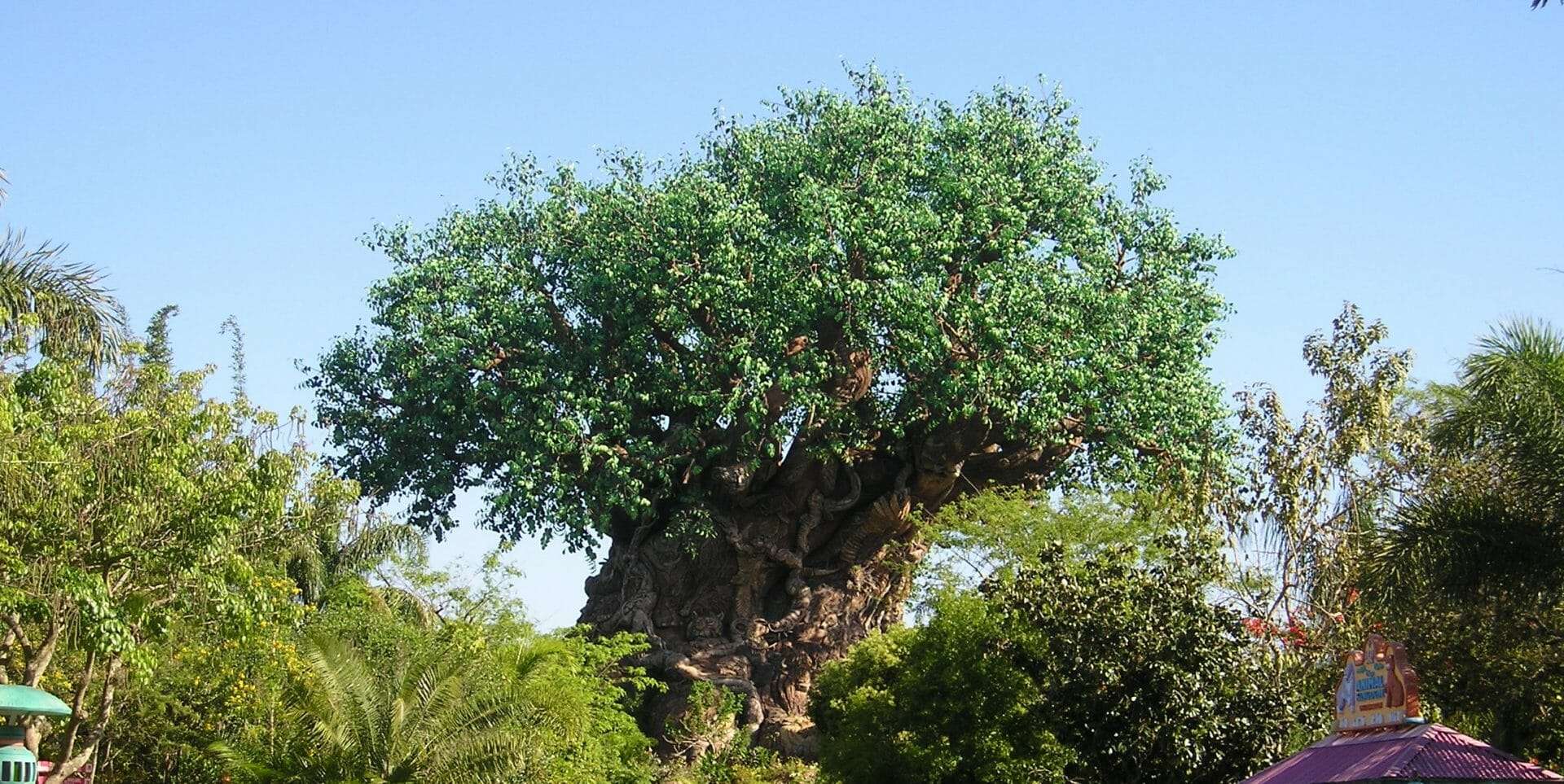 When Brian and I woke up after what seemed like only a few hours of sleep, we realized that this vacation may require a second vacation. But we pushed ourselves out of bed and to our first Disney breakfast. Animal Kingdom opened early with “Magic Hours” on Monday. Since we stayed at the resorts, we could enter the park at 8AM. So, we needed to eat at 6:30 to get on a 7:15 bus.

We both got the deluxe breakfast because we knew this would be a long day. Unfortunately, they ran out of Mickey waffles, so I had a pancake. Brian gloated as he poured syrup into Mickey’s face. He would get his comeuppance later. 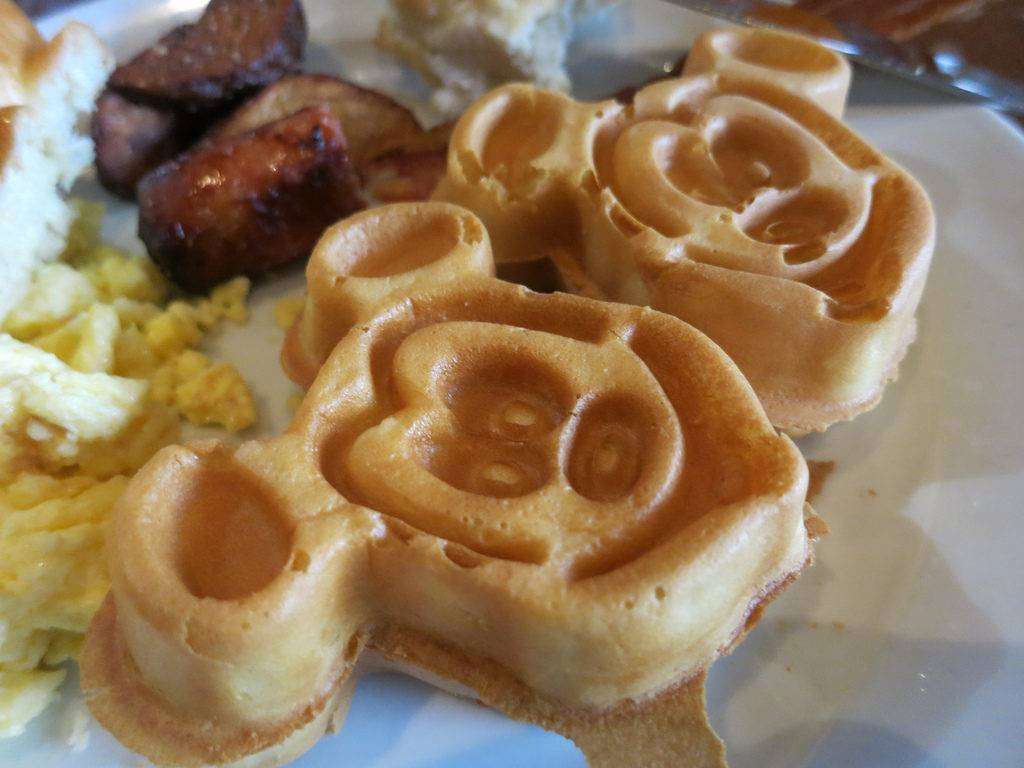 We met Mike and Erin in front of their resort and hopped on the crowded bus. We were not, of course, the only people planning on going to the park early. If you ever think you will be smarter than the crowds at Disney, don’t.

Basically, a Disney-fied zoo, I did not really know what to expect from Animal Kingdom. I had been to zoos and some of the world’s finest zoos. But my goal of the trip was to enjoy everything – at least once.

Of course, people line up to get into the park and large groups try to cut. Our day started with teenage groups trying to cut in line and our day ended with similar flourish. Luckily, people called them out on it (my friends). They looked sheepish for approximately 2 minutes before getting ahead of us anyways.

Our plan was to head to Expedition Everest, the one major roller coaster in Animal Kingdom. I am not a huge fan of rides, but I promised the woman from Philadelphia on Day 1 that I would try everything. As I heard people scream, I knew this would not sit well with me.

This was the ride I hated the most in our vacation. I could tell it would go higher and faster than the others. But no one warned me about the tricks of the ride. It goes up through the mountain and then stops because the tracks are “out” as the yeti destroyed it. At this point, I yelled, “Backwards, NOOOOOO!” Then it stops again as you begin moving forward again as you fall down the mountain.

Supposedly, you see a Yeti at the end. They all told me I needed to ride it again, but I figured there is a YouTube video.

I was right. You can kinda see it there.

Mike, Erin, and Brian rode it again. I watched from the safety of land.

After they were done screaming, we headed to a safer and slower ride. We jumped in line to see how active the African animals in the safari would be. We had a Fast Pass for the afternoon, but we figured we would see everything well if we went both times.

It really is a fantastic experience. Unlike regular zoos, the animals are able to just move about. You are safely in a car and they can cross in front of your paths. But I would imagine they are basically domesticated. But you can see then walk and run in ways that you cannot see in Brookfield or Lincoln Park.

In the morning, the lions were more active, but we only saw giraffes as they wandered away. However, many of the other animals were walking around eating things. And we got a nice close-up of the tiny baby elephant. The afternoon was warmer and bumpier, but still enjoyable.

Festival of the Lion King

9 times a day, the cast of this show needs to perform acrobatics and way too much work. Dressed like monkeys and lions and other animals, they recreate many of the songs from The Lion King. You get really cool looking animatronic animals and a relatively decent story. But wow, easily the gayest thing I have ever seen in my life. Yet, I am sure that at least half of the audience voted for our current President. I will never understand the appeal of “Liberace” but the denial of rights to him from the biggest fans. Hate the sin, love the sinner, I suppose. But you could see way more of the monkeys than I really needed to see.

I just cannot believe the amount of performances that these people have to do. It’s like a 30 minute show and they need to go every hour. I cannot imagine enjoying jumping around like that feels good by 8PM.

It’s Tough to Be a Bug

After the festival, we headed to the inside of the big tree. Dirty secret – I love A Bug’s Life. Mainly, I love Dave Foley and Flick. The 3-D show tells a cute little story of some new routines that they are trying out for their next tour. Nothing revolutionary but it’s charming.

Unfortunately, it was not only tough to be a bug. At some point in the day, Brian got bit by a bug. He had a lump on his leg the size of a half-dollar.

The Park in General

Overall, I think this park needs more food options. I do not want to eat a turkey leg. It also really needs seating in the shade. It’s incredibly sprawling, but you cannot find anywhere to sit and eat or relax. This became a problem as Brian began to not feel well – either from the heat or from the bug bite or both.

We needed to split up, so Brian and I barely got to see Dinoworld and we tried to sit down at Yak & Yeti. However, the food there was pretty good. Nonetheless, it really did not make Brian feel that much better.

We continued a little bit more at the park. We visited Rafiki’s Island and the little petting zoo. And then we rode on the Jungle Safari again. And at that point, I told Brian to go back to the hotel. We had two more full days left and he was not getting better.

If we were able to sit down for a while in the shade and eat something more than a couple of samosas, it may have been a little better. Try harder, Animal Kingdom. 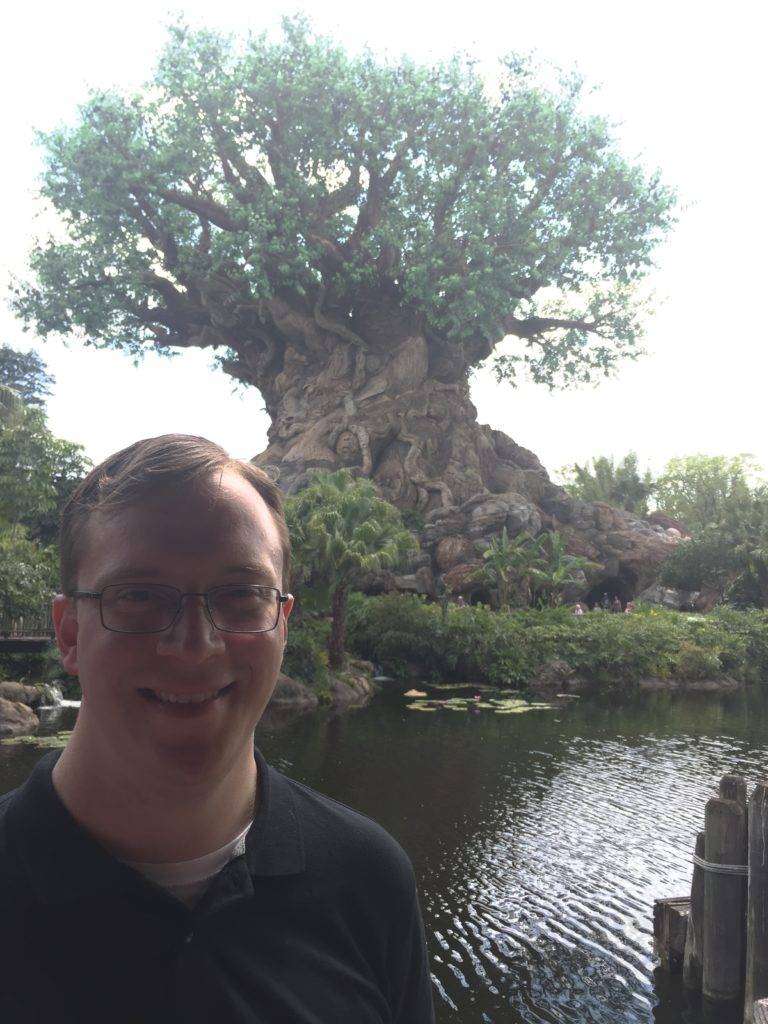 Back to Magic Kingdom

Again, we set out to Magic Kingdom and luckily after a couple hours of rest, Brian felt better and met us for the firework show.

That night, we were pretty tired. A full day at Animal Kingdom leads to upset people – from what I can tell. No offense to the park. But it seemed to also be the day where high school kids were the most concerned about their curfew. As we got into the line, a group of high school students were ahead of us and then another large group of people were behind us. Of course, the high school students ahead of us who had friends who were later than them. And they decided to try to cut in line. Well, that was not going to happen.

When you travel with a high school teacher, they know how to shut that down. We could see the possibility of young families behind us not getting on the bus because of these kids. So, Erin spoke up. A few listened and a few sheepishly continued to cut in line. We got one tearful, “I’m going to miss my curfew.” But again, she’s used to sad excuses and said, “Should have timed it out better than.”

On day 2 at Disney, I think we finally learned how to do the parks. It only took us a little sickness and an incredibly long day.