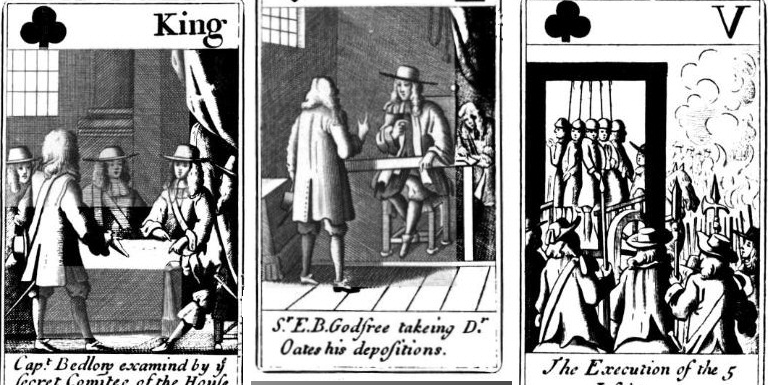 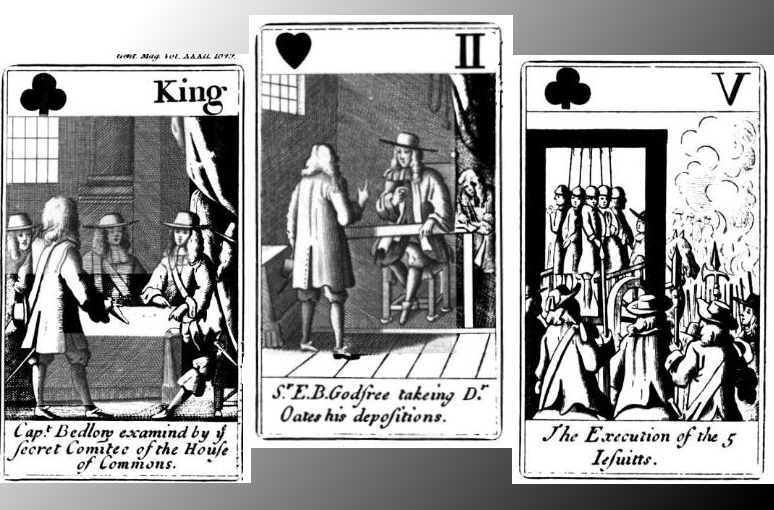 Stephen Colledge (also known as Stephen College) was a troublemaker. He targeted the Catholic Church and the Pope. His weapon of choice: to sing. Oh, and he invented the Protestant Flail. When he arrived at Parliament, he handed out blue ribbons that read, “No Popery, No Slavery.” The defing moment that led to his trial was his ballad, “A Ra-Ree Show.” Today, we call those “peep shows.” Below, a small taste of the ballad that led to Stephen Colledge’s death.

Gets the blood going, right?

Titus Oates fabricated a plot that the Pope was going to kill King Charles II. After joining the Catholic Church, Oates joined up with a group of Jesuits. Here, he “uncovered” the plot to depose King Charles II and replace him with his Catholic brother James. Oates began to spread rumors of individuals who were members of this conspiracy. In other words, a Baroque Joseph McCarthy.

Unfortunately, although he fabricated the conspiracy,  one of the first names he gave, Edward Coleman, actually shared communications with the French. By the end of 1678, Parliament passed two acts that forbade Catholics from being members of both the House of Commons and the House of Lords. Oates created an enemy that did not exist.

But Stephen Colledge fell for all of these lies. He became a vocal proponent based on the lies of Oates. Colledge took the conspiracy and became a fanatic. In the end, Stephen Colledge had been cautioned to “keep his tongue in’s head, or if he did not, he would talk himself at last to the Gallows.”

The Trial of Stephen Colledge

In 1681, Colledge went to Parliament with weapons to call out the King. He advocated resistance because William Scroggs acquitted George Wakeman, one of Oates’ targets. Wakeman had been charged with treason for attempting to poison the King. Although in his first trial, the jury was packed with sympathizers, the government brought a second trial.

According to Justice Douglas, “he asked for a copy of his indictment, the names of the jury, and a lawyer to defend him. These were denied him. He was told by the court that if during the trial any question of law was raised on which he needed legal advice, the court would appoint a lawyer.” At the time, the accused had the right to counsel in cases of minor crimes. But not treason.

Stephen Colledge was forced to plead not guilty without benefit of counsel and stood trial. Unfortunately, he did not know all of the points of law regarding treason. He fought the judges throughout the trial and he could not match the prosecutor.

The jury found him guilty. They hanged and quartered him.

Of course, at his execution, supporters sang a ballad in his honor. “A New Ballad of the Protestant Joyner” honored Stephen Colledge. Again, a quick snippet of seditious language 250 years ago. Remember, the ƒs read like “s”.

He’s ƒwell’d up with Treacherous Sedition,
And now of Rebellion is ƒick,
He wants the Fore-man his Phyƒitian
To find out ƒome Pollitick trick,
For the Good-man’s in the Tower,
And now lies beyond the power
Of Whig or of Shrieve,
To give him Reprieve,
Or Counƒel him how himƒelf to Retrieve.