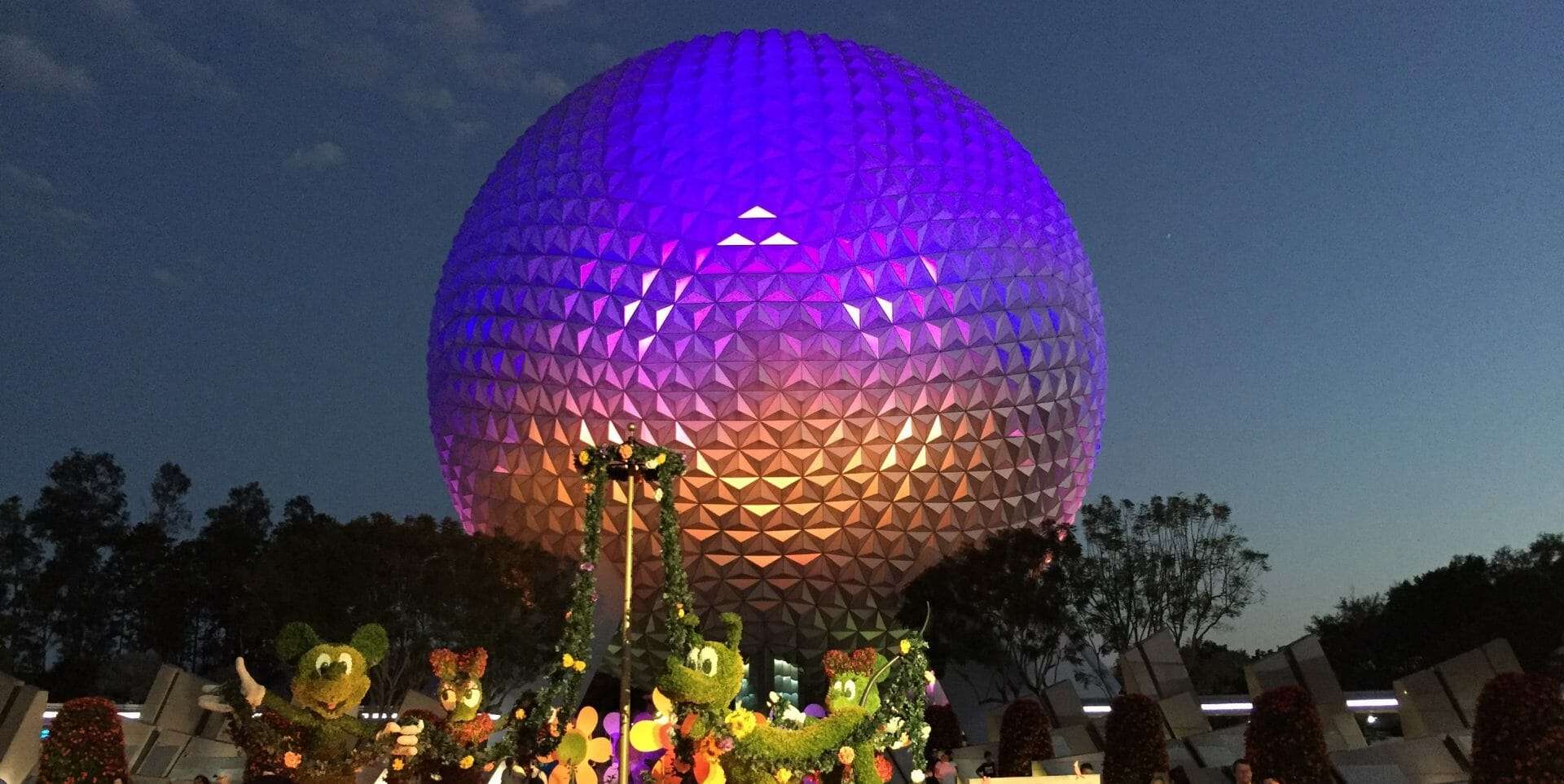 After bringing Max to his kennel, Brian and I had a full day to ourselves. But generally, we cleaned up our house. And we packed.

With t-shirts and shorts in hand, we headed to Lexington’s Blue Grass Airport at 5:30AM to fly through Charlotte and then arrive in Orlando, FL. I truly had no idea what to expect from Disney World. Brian had been there many years ago. But more than anything, we had never flown together. Of course, I annoyed Brian with my anxiety of flying and my rush through security. But we got him a coffee and he quickly forgot.

Overall, our flight was uneventful and we arrived in Orlando early. We stopped for a quick lunch and headed to the Disney Magic Express. Only in Florida can a bus be considered Express. And the line was incredibly long when we arrived.

One hour later, our friends were arriving. And when we jumped into line, they called because they had landed. I told them that we would still be in line when they arrived. They were not sure but I was right. We expressly waited 45 minutes to get on a bus. Bad timing.

As usual, we got into line with people who wanted to talk with us. They looked at us and we began our long conversation. We found out about their plastic fabrication business in Philadelphia. We learned about the family they have. And we found out that the husband had been to Disney World for the first time in 1972 and went there 30 other times. I don’t think I will match his numbers.

Of course, we knew that Disney meant a lot of lines, but we did not know if this first line would mean lots of line conversations. It did not. Overall, most people just stare blankly or yell at their kids in lines.

Our friends arrived as we got closer to the front and the nice Philadelphia couple invited them up to stand with us. But they did not. However, when we finally boarded the bus, people gave us an extra row so we could catch up on the forty minute ride to our hotel.

We never saw the Philadelphia couple again, but I am sure if we go back, they may still be in that line on their 38th trip.

The hotel we stayed at was also fine. No complaints. But we had another fun encounter at the counter.

Maria wanted to know if we traveled with anyone else. We said yes but that they were at a different hotel. And then we tried to distinguish the difference between an “A” and an “E”. I almost jumped over the counter to type in E after the sixth “A?”.

But due to the misunderstanding, she gave us the “premium” room, which looked like our friends’ non-premium room. Either way, we slept in the room but other than that, it could have been beautiful. We wouldn’t know.

The big golf ball stands uniquely above the park. And it brought a smile to my face to see it.

The Seas with Nemo and Friends

We jumped right in as we headed to The Seas with Nemo and Friends. What a beautiful aquarium. Although nothing overly special, fish swimming around always seem relaxing. We watched the manatees swim around and saw the fish get fed. We also saw a whole bunch of little clownfish sitting near a starfish. Then, we asked the man standing next to it and asked what they were doing. He said they were eating off the starfish, but very few of them appeared to nimble on the starfish. Looking it up now, it looks like a dominance game.

If you go to Disney, you need to just get in the spirit. The Philadelphia couple recommended it as well. I did not want to say no to anything. But Mission: Space made me nervous as I previously got sick due to a video ride that shook around.

But I did it. And Mission: Space introduces you to Apollo 13 era Gary Sinise, who will work with you as you and your crew head to Mars. We all lined up and the four of us had roles: navigator, pilot, commander, or engineer. Of course, I was the commander, who had to hit his two buttons at the beginning and the end. I also ensured everyone else pushed their right button.

Mainly, you shake around and its a quick trip to Mars. And it’s hard not to laugh a lot. But for my first real ride at Epcot Center, I think I “commanded” well.

Ever want to take a commercial too far? The Test Track, presented by Chevy, allows you to design a car and then enter another car and fly around a track. 65 mph does not feel great without the top of the car. Brian and I designed a purple box car that probably could take down a building but no one would want to drive fast. Mike and Erin created a real-life Mario Kart for a family of four to somehow fit. Either way, we enjoyed seeing the pictures of the cars as we flew around the track.

Then Brian and I got out of the car and built a commercial for our car. We set it on the moon with disco music and a cowboy narrating. Sam Elliott would be proud.

Everyone told us the best part of Epcot Center is the different shops and stores. We spent a lot of time then walking around the many different countries looking at food and characters. This included a ride through a Mexican restaurant in the Gran Fiesta Tour Starring The Three Caballeros. Dancing animatronics that probably would make politically correct individuals blush…

We ended up eating Mexican food as well because it really smelled the best as we traveled the world in an hour. This was also where we met Donald Duck. So, honestly, Epcot Center was my favorite just for this alone (not really). 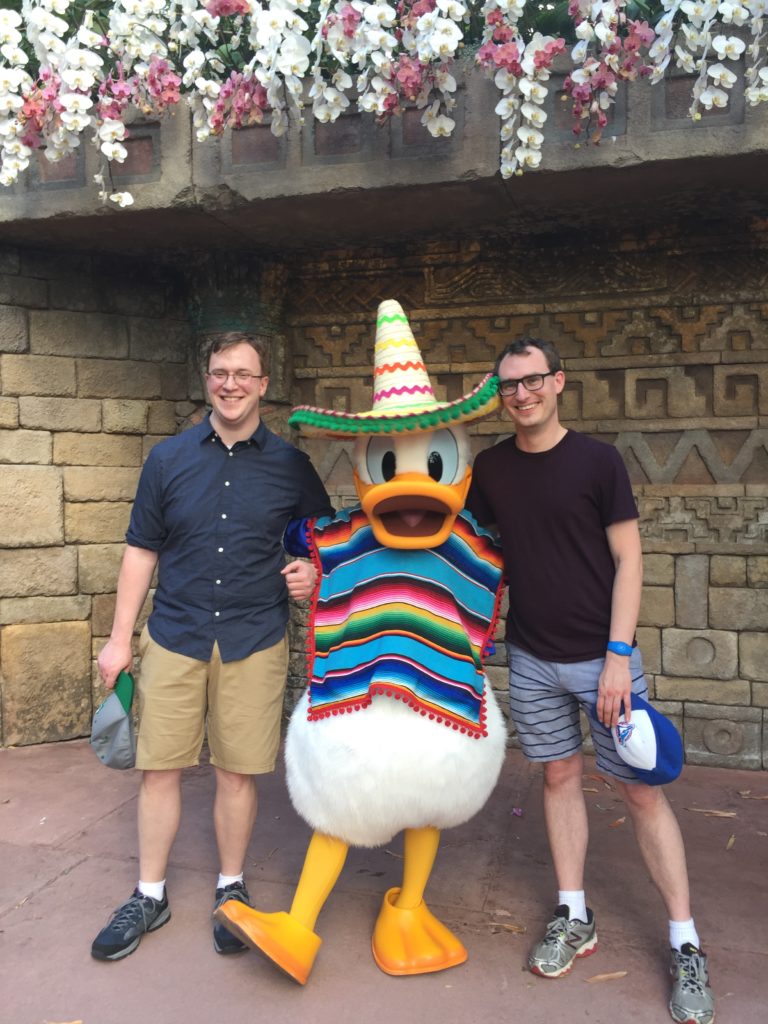 My one regret is that we did not really go into each of the restaurants and locations. But mainly, Brian and I had no idea what we were doing at this point. I know how much he loves little shops, so Epcot Center would be a place, we would probably spent more time.

Our last ride at Epcot Center got me to understand what the golf ball was. Disney sure has a progressive agenda and I loved it. It just takes everything I believe as fact and puts it out there. You need to love animatronics at Disney as well. Luckily, I just imagine them all coming to life at some point. One of the interesting components is that the rides (and many others) just end around the time that Disney World was built. Any extensions do not exist in the ride and no new animatronics really appear in a natural environment.

Epcot Center seems like a good place to go without the kids. I can understand that. The golf ball really does stand out. But due to its lack of rides, we did not spend a lot of time there. Next time, I think we would add an hour to our Epcot Center trip.

Heading to the Magic Kingdom