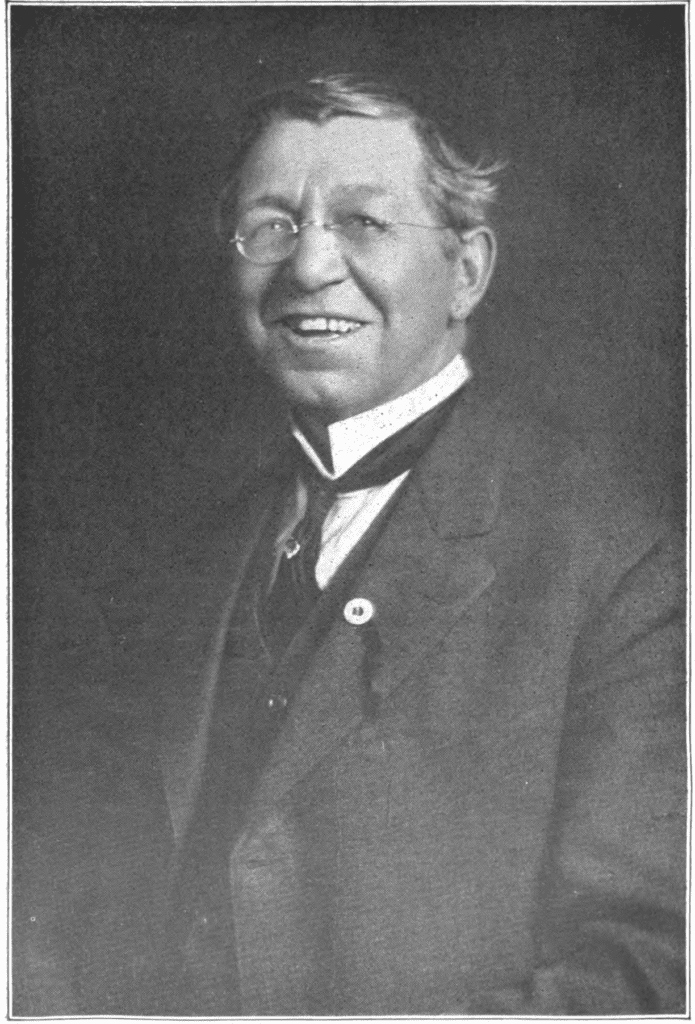 Jacob Coxey was born April 16, 1854 in Selinsgrove, PA and raised in Danville, PA. At age 16, J.S. Coxey began to work as a water boy at the mill and worked his way up to a stationary engineer. Eventually he began working for his uncle’s scrap metal firm. In 1881 his work brought him to Massillon, Ohio to purchase metal.

J.S. Coxey spent a lot of time reading and thinking about politics. One of his earliest ideas was an infrastructure program. He proposed a nationwide public works program. He recommended a county road prgram under the supervision of the Secretary of War. A minimum wave of $1.50 per day for common labor and $3.50 per day for teams and labor. All would work an 8 hour day. The Treasury Department would issue notes against local bonds.

In 1894, J.S. Coxey proposed the program above as the Non-Interest Bearing Bond Bill. The bill received the  endorsement of American Federation of Labor and he persuaded Kansas Senator William A. Peffer to introduce the bill to congress. 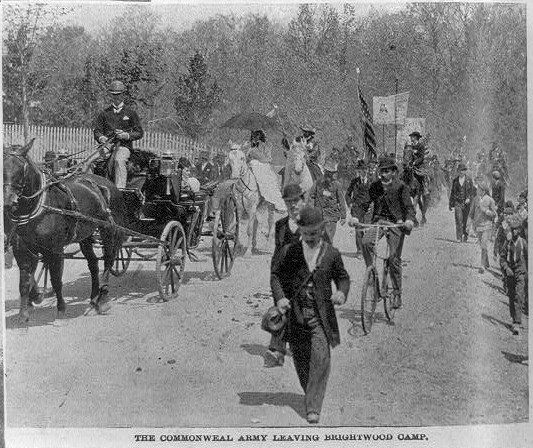 To raise awareness of the bill, he led an army of unemployed men of out Massillon, Ohio on March 25, 1894.  As the “Army” approached the Capitol building, they had grown to 4,000 people, where they met 12,000 more marchers at the capitol. According to Justice Douglas, they sang:

After the march is over, After the first of May, After these bills have passed, Then we will have fair play.

The marchers stopped a distance from the Capitol as the police stopped them. However, J.S. Coxey slipped unseen up the Capitol steps. But they stopped him before he could begin speaking. They arrested J.S. Coxey and convicted him of taking banners onto the Capitol grounds. He spent 20 days in jail.

Although the leaders were arrested and the impact of the march was mitigated, it is still significant as the nation’s first protest march.

Justice Douglas noted that the “petition in boots” failed. But it left three definite marks.

What Happened to J.S. Coxey?

J.S. Coxey remained politically active and ran for several offices. He unsuccessfully ran for Ohio Governor twice. He ran for Congress and failed multiple times. And he ran for President twice – again unsuccessfully.

However, he did become the Mayor of Massillon, Ohio at the age of 77.

He lived long enough to see all of the infrastructure plans that President Franklin D. Roosevelt put into place during the Great Depression. Roosevelt even called Coxey to discuss unemployment and the WPA.

The year before he died, he finally gave the speech he planned to give to his “armies.

“The Constitution of the United States guarantees to all citizens the right to peaceably assemble and petition for redress of grievances, and furthermore declares that the right of free speech shall not be abridged.

We stand here today to test these guarantees of our Constitution. We choose this place of assemblage because it is the property of the people. Here, rather than at any other spot upon the continent, it is fitting that we should come to mourn over our dead liberties and by our protest arouse the imperiled nation to such action as shall rescue the Constitution and resurrect our liberties.

Up these steps the lobbyists of trusts and corporations have passed unchallenged on their way to committee rooms, access to which we, the representatives of the toiling wealth-producers, have been denied.

We stand here today in behalf of millions of toilers whose petitions have been buried in committee rooms, whose prayers have been unresponded to, and whose opportunities for honest, remunerative productive labor have been taken from them by unjust legislation, which protects idlers, speculators, and gamblers: We come to remind the Congress here assembled of the declaration of a United States Senator, ‘that for a quarter of a century the rich have been growing richer, the poor poorer, and that by the close of the present century the middle class will have disappeared as the struggle for existence becomes fierce and relentless.’

For the next week, I will be out of town, but no fear, I am hoping to write up the daily My Country sections. None of the rest of the content will during my vacation. But I wanted to keep you up to date with An Almanac of Liberty.

I cannot hold the donut bag and the coffee and the Rottweiler because I do not have six hands.