The Quartering Act of 1765, the Boston Massacre, and American Crime 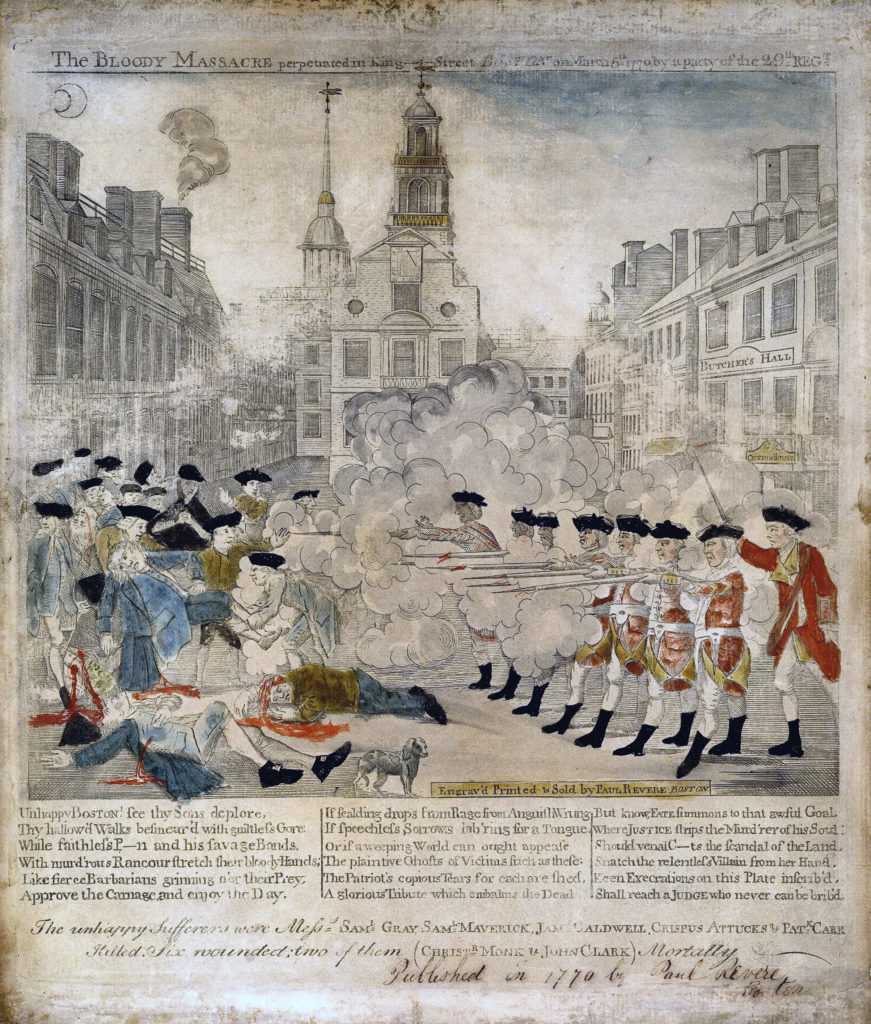 On March 24, 1765, Parliament passed the Quartering Act. The Quartering Act of 1765 required the colonies to house British soldiers in barracks provided by the colonies. If the barracks were too small to house all the soldiers, then localities needed to accommodate the soldiers in local inns, livery stables, ale houses, eating houses, and the houses of sellers of wine. The host needed to furnish the soliders with food and “small beer, cyder, or rum mixed with water.”

Generally, the Army had seldom forced people to evacuate the houses. Previous to the Quartering Act, colonists argued that their local legislatures should have the power to determine quartering, not the King or Parliament. In fact, the New York colonial assembly disliked being commanded to provide quarter for British troops. New York refused to comply with the law. In reaction, in 1767, Parliament passed the New York Restraining Act. The Restraining Act prohibited the royal governor of New York from signing any further legislation until they complied with the Quartering Act.

In Massachusetts, barracks already existed on an island from which soldiers had no hope of keeping the peace in a city. Due to unrest British officers followed the Quartering Act’s injunction to quarter their soldiers in public places, not in private homes. They pitched their tents on Boston Common. The soldiers, who now lived within the same community as the patriots, became problematic. eventually, these fights led to the Boston Massacre of 1770, where British soldiers killed five colonial rock throwers.

How the Revolution Addressed the Quartering Act

Next, in 1774, Parliament passed the Quartering Act of 1774. The Act gave the power to the governor, not the assembly, to enforce necessary arrangement for British troops. Basically, after New York and Massachusetts did not play nice with their rules, they superseded their rules. In elementary school, we all learned about the Intolerable Acts. This Quartering Act became one and within a year, the American Revolution began.

The quartering of soldiers remained at the top of the patriots minds. When Thomas Jefferson wrote The Declaration of Independence, he included among the kings grievances:

He has combined with others to subject us to a jurisdiction foreign to our constitution, and unacknowledged by our laws; giving his Assent to their Acts of pretended Legislation:
For quartering large bodies of armed troops among us.

And as they worked on the new Constitution, the Bill of Rights included a restriction on the quartering of soldiers. The Third Amendment, proposed by Congress in 1789, reads:

No Soldier shall, in time of peace be quartered in any house, without the consent of the Owner, nor in time of war, but in a manner to be prescribed by law.

Although the quartering of soldiers does not appear to have much modern day concerns, the Supreme Court, and specifically, Justice Douglas, used the Third Amendment to imply a right of privacy as it implies a belief that an individual’s home should be free from agents of the state (Griswold v. Connectictut). “[S]pecific guarantees in the Bill of Rights have penumbras, formed by emanations from those guarantees that help give them life and substance.” Very few lines in a Supreme Court opinion has led to so much disdain.

For the past two seasons, American Crime has changed how I view network television. The first season set up a murder mystery involving well-to-do white kids who supposedly were killed by two druggies. The mystery slowly unravels as the families deal with truths. And the suspects become clear. In the midst of all of that, your own biases and ignorance play into what you think happens.

Then the second season involved the rape of a male student by a basketball player. But again, your own biases and emotions play into how you slowly grow suspicious of many characters. I think the second season stood incredibly tall with all of the great television.

Most importantly, it may have the best cast on television. Regina King has deservedly won two Emmys for his roles. Felicity Huffman and Timothy Hutton create made new characters that seem nothing alike. Benito Martinez and Richard Cabral have played incredibly different characters with different motivations, but added depth to what could easily become flat characters. And Lili Taylor really stepped up in season two. Her first season role got lost in the shuffle but she excelled with the role of a troubled mother trying to help her son in all the wrong ways.

I have only watched the first episode of the third season, but it again hits strict political lines regarding immigration and drug use and the sex trade. Lots of fun there, right! But it has become must see television if you want to see good performances and strong drama.

It doesn’t hurt to spread out a little and work on something new because you never know when you’ll make good.