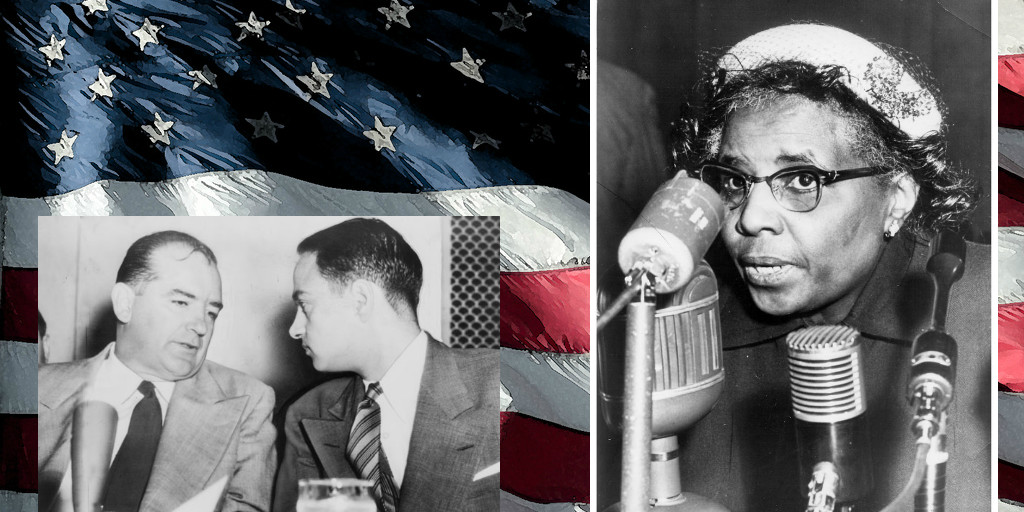 My Country – Annie Less Moss and the McCarthy Hearings

Much of March has focused on the McCarthy hearings, which Edward R. Murrow shined a bright light on as Douglas most likely wrote this book. On March 16, 1954, Murrow turned his program See It Now to the Annie Lee Moss hearings.

Who Was Annie Lee Moss?

Annie Lee Moss first worked for the government as a  dessert cook in its cafeterias. But in 1945, she moved to a job as a clerk in the General Accounting Office. Then in 1949, she secured a civil service position as a communications clerk at the Pentagon. When President Truman issued executive order 9835, which required loyalty oaths, the loyalty board of the GAO and then the Army investigated Annie Less Moss. Due to the investigation, she was suspended from her position with a recommendation of discharge. Annie Lee Moss then appealed the decision and was cleared by the Army board in 1951.

The evidence against Annie Lee Moss came from an informant for the FBI who had joined the Communist Party. She could not identify Annie Lee Moss personally, but testified that she saw her name in the membership rolls. This got the attention of the imbecile Senator Joseph McCarthy, who brought Annie Lee Moss in front of his UnAmerican Activities committee.

McCarthy had claimed that Moss had transmitted messages for the army, but in reality, she never worked in the code room. She had an attorney, who McCarthy failed to allow to speak. The hearing became heated with Annie Lee Moss stating that she rarely read newspapers and had never heard of Communism. Democrats began to poke fun at McCarthy’s presentation of this soft-spoken and timid woman as a villain by asking her questions like, “Who is Karl Marx?” for which she responded, “Who’s that?” The audience began to laugh.

Instead of continuing on, McCarthy left the room and left the rest of the questioning to Roy Cohn.

Roy Cohn may go down in American history as one of its biggest monsters. In addition to helping McCarthy, he also taught President Donald Trump everything he needed to know about abusing power.

However, they never allowed Mrs. Moss’s attorney to ever question any of these witnesses. Additionally, Cohn never presented this evidence. At this point, Senator John McClellan protested stating that Annie Lee Moss deserved to have the evidence produced in her presence. Chairman Senator Karl Mundt agreed to have the statement stricken. But McClennan was still upset because

You can’t strike these statements made by counsel here as to evidence that we’re having and withholding. You cannot strike that from the press nor from the public mind once it’s planted there. That’s the – that is the – evil of it…. It is not sworn testimony. It is convicting people by rumor and hearsay and innuendo.

Loud applause erupted from the spectators.

These scenes became movie history as well in Good Night and Good Luck.

Modern evidence has shown the Annie Lee Moss may have received The Daily Worker at her home. She may have had some connections to the Communist Party. But none of that matters. Confronting one’s accuser with evidence and not hearsay is fundamental to the American system.

Justice Douglas concludes with a segment of President Eisenhower’s speech in 1953 at the B’nai Brith Dinner to celebrate the 40th anniversary of the Anti-Defamation League.

In this country, if someone dislikes you or accuses you, he must come up in front. He cannot hide behind the shadows, he cannot assassinate you or your character from behind without suffering the penalties an outraged citizenry will inflict…If we are going to continue to be proud that we are Americans, there must be no weakening of the codes by which we have lived. By the right to meet your accuser face to face, if you have one…

I wish sometimes that our current leadership would heed these words.

With the release of Jens Lekman’s new album, a look back at one of my favorite songs ever written.

The shirt was actually $20.