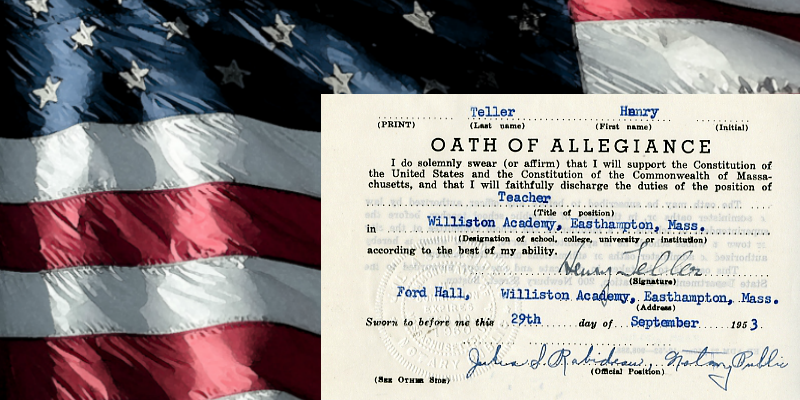 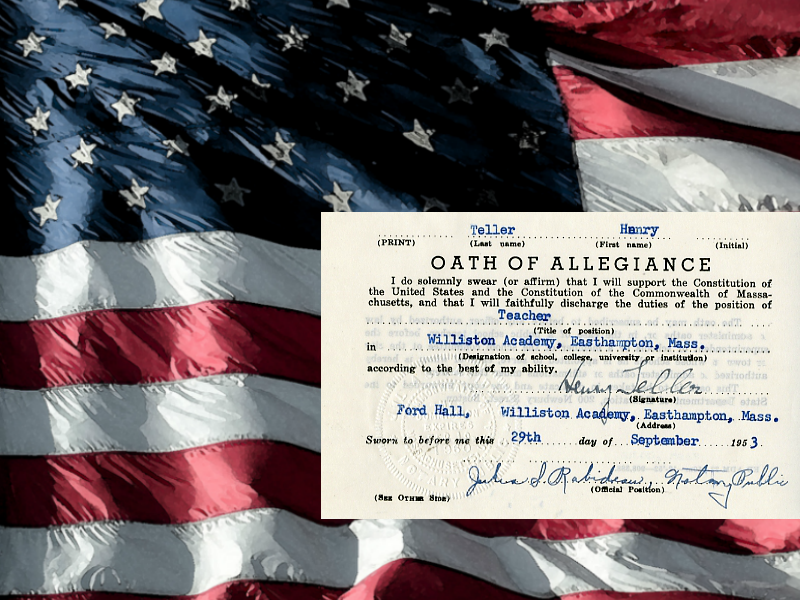 On March 21, 1947, President Truman issued executive order 9835. The program checked the loyalty of loyal federal employees. The Federal Employee Loyalty Program allowed the FBI to research whether the name of any of the 2 million federal employees raised questions about their associations and beliefs. If the investigation found any “derogatory information”, the FBI followed upwith a field investigation. The The FBI delivered their findings to over 150 loyalty boards in various government departments. Those boards conducted their own investigations and were authorized to use the testimony of confidential witnesses whom the subject of the investigation was unable to confront. An employee could be fired if “reasonable doubt” existed concerning their loyalty. A loyalty board’s decision was not subject to appeal.

In describing the situation in 1954, Justice William O. Douglas compared our system to the British. With their civil service of over 1 million employees, they applied loyalty procedures only in areas vital to security. By 1954, Douglas asserts 17,000 employees were covered.Of that, 198 had been suspended (78 of them reinstated, 69 transferred to non-secret work, 23 dismissed, 19 resigned, and 9 on leave).  Douglas believed this system had a sense of decency.

But when he wrote about ours:

Men and women have been officially condemned and ruined for life as a result of a procedure which someday the bright conscience of America will denounce us unworthy of our libertarian philosophy.

Obviously, the power of Congressional investigations and the suggestions of Dean Erwin N. Griswold still rang in his ears.

Bishop Bernard Sheil was the auxiliary bishop of the Roman Catholic Archdiocese of Chicago for four decades. Bishop Sheil took on Sen. Joseph McCarthy in the depths of the Red-baiting era. Regarding the McCarthy hearings and loyalty oaths, Bishop Sheil said:

These things are wrong even if they are mistakenly thought of as means to a good end. They are morally evil and to call them good or to act as if they were permissible under certain circumstances is itself a monstrous perversion of morality. They are not justified by any cause – least of all by the cause of anticommunism, which should unite rather than dive all of us in these difficult times.

Sheil became the epitome of Chicago Catholic liberalism. And as Cardinal Cupich holds the reigns of the Archdiocese today, hopefully, he continues the fight for liberal Catholicism.

After President Truman issued executive order 9835, New York State adopted the “Feinberg Law.” The 1949 law provided for the dismissal of teachers who belonged to “subversive organizations.” Similarly to the loyalty oaths for federal employees, New York teachers were asked if they belong or ever belonged to the Communist Party. The Court held that although the teachers had the right to assemble, speak, think and believe as they will, they had no right to work for the State in the school system.

Justice Douglas adamantly dissented. He argued that the First Amendment applies to everyone, especially school teachers. He argued that the law treated the teachers as guilty by association. The teacher could have no hearing to defend him or herself. Instead, by joining the organization, the case was over. Additionally, Douglas worried about how the community would act as they all become detectives, searching for disloyalty.

The law inevitably turns the school system into a spying project. Regular loyalty reports on the teachers must be made out. The principals become detectives; the students, the parents, the community become informers. Ears are cocked for tell-tale signs of disloyalty. The prejudices of the community come into play in searching out the disloyal. This is not the usual type of supervision which checks a teacher’s competency; it is a system which searches for hidden meanings in a teacher’s utterances.

What was the significance of the reference of the art teacher to socialism? Why was the history teacher so openly hostile to Franco Spain? Who heard overtones of revolution in the English teacher’s discussion of the Grapes of Wrath? What was behind the praise of Soviet progress in metallurgy in the chemistry class? Was it not “subversive” for the teacher to cast doubt on the wisdom of the venture in Korea?

In the end, only the teacher’s performance as a teacher should come into play when evaluating the teacher, according to Douglas.

Although not directly overruling Adler, Keyishian v. Board of Regents, 385 U.S. 589 (1967), found the same laws unconstitutionally vague.  The Court held that the country had an interest in protecting the First Amendment rights of teachers. Therefore the overly broad and vague requirements in New York violated the teachers’ Constitutional rights.

President Trump received negative press when he had supporters pledge loyalty to him at rallies. He asked supporters to “Raise your right hand: ‘I do solemnly swear that I — no matter how I feel, no matter what the conditions, if there’s hurricanes or whatever — will vote, on or before the 12th for Donald J. Trump for president.” But in the end, he argued it was all for fun. Although loyalty oaths to a candidate differ from loyalty oaths to the country, neither come off as very American.

Like so many other liberals, we turned on Rachel Maddow to see about Trump’s tax returns. Without a few minutes, I told Brian we could watch anything else, this is not going anywhere.

I have no problem with Rachel Maddow generally. I am sure she does a great job with providing a progressive view of the news. My problem lies with the entertainment aspects of her reporting and most of cable news.

I predicted the winner of the last Top Chef season about half way through. You can spot a “winner’s edit.”

It’s why I knew to turn off Maddow within a few minutes. If she had something groundbreaking, they would not have given the airtime to Maddow. NBC would have put Lester Holt on primetime and taken up an hour. Secondly, she spaced out the story just like a reality show episode. You tease and tease and tease. The conclusion of a competition show episode is “who goes home.” The whole episode revolves around that decision. The main competitions, the arguments, the laughs all center around a few people to help you understand why the person was voted out.

Maddow laid out why the tax returns matter, why they should matter, why the Russian ties matter, and why Trump does not want his tax returns public. All of that works great. But then the big reveal happens and it cannot live up to the build-up, unless it was a blindside (am I right, Survivor fans?).

Stephen Colbert does a great job of satirizing her performance. In the end, when I watch or read news, I do not want entertainment value. And I definitely do not want a blind side. Instead, I want to learn something.

She should have revealed this simple document in two minutes and then talked about the components that matter. How will his tax policies affect people like him? Why did he have some many business losses again? Why did she receive this information? Maybe next time. Until then, I’ll stick with my podcasts and the occasion Jake Tapper episode.

I don’t understand why he walks about 150 yards from his house in shorts and turns around, but never looks away from his phone.