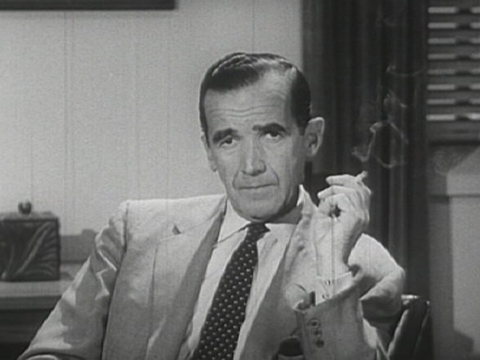 Justice Doulgas wrote An Almanac of Liberty in 1954. On this date in 1954, Edward R. Murrow reported on Sen. Joseph McCarthy and begin his decline. I have no idea if Douglas watched this report and mentioned it in the book. But today’s entry focuses on unAmerican activities. Watch the entire video to truly understand what Murrow did to stop this demagogue

As we struggle with the current administration and its use of fear and hatred. We need to remember that 63 years ago the Republican Party did the same thing.  But at the time, Murrow spoke out as a news anchor to try to remind us what America stands for.

We will not walk in fear, one of another. We will not be driven by fear into an age of unreason, if we dig deep in our history and our doctrine, and remember that we are not descended from fearful men — not from men who feared to write, to speak, to associate and to defend causes that were, for the moment, unpopular.

This is no time for men who oppose Senator McCarthy’s methods to keep silent, or for those who approve. We can deny our heritage and our history, but we cannot escape responsibility for the result. There is no way for a citizen of a republic to abdicate his responsibilities. As a nation we have come into our full inheritance at a tender age. We proclaim ourselves, as indeed we are, the defenders of freedom, wherever it continues to exist in the world, but we cannot defend freedom abroad by deserting it at home.

The actions of the junior Senator from Wisconsin have caused alarm and dismay amongst our allies abroad, and given considerable comfort to our enemies. And whose fault is that? Not really his. He didn’t create this situation of fear; he merely exploited it — and rather successfully. Cassius was right. ‘The fault, dear Brutus, is not in our stars, but in ourselves.’

Douglas believed that America was a constant threat to totalitarianism because it was founded on the consent of the governed. Because we grant civil rights to all people, our very existence threatened them more than any stockpile of bombs.

“Ideas are indeed the most dangerous weapons in the world.” He noted that with the freedom of ideas, we had nothing to fear from the communists. In today’s terms, I believe we have nothing to fear from terrorism for the same reasons. But Justice Douglas noted that in our history, we have forgotten this. He noted specifically the proponents of unAmerican investigations.

He concluded the entry with an anecdote.

I heard a speech on the Bill of Rights at a meeting of lawyers in the Far West. There was little more in it than a description of some of the roots of our civil liberties. As the speaker was leaving, I heard one lawyer say to another, “There goes a communist if I ever saw one.”

I have called the Muslim ban unAmerican because I agree with Justice Douglas that discrimination defines unAmerican behavior.

69 Love Songs quickly began repeated listening for me back in law school. I suppose I have always liked concept albums, so the idea to put 69 love songs into an album fascinated me. Then I learned that Stephin Merritt worked at piano bars playing Stephen Sondheim songs and then used Sondheim’s songs to write 69 Love Songs all made sense. I noted the new album set (5 albums!) that continues to get rave reviews from everywhere I look. The album appears to be a musical autobiography. I’m in.

I found this recipe to use leftover pork and I don’t know if it’s any good.