Regulations, The Gilded Age, and The Nice Guys 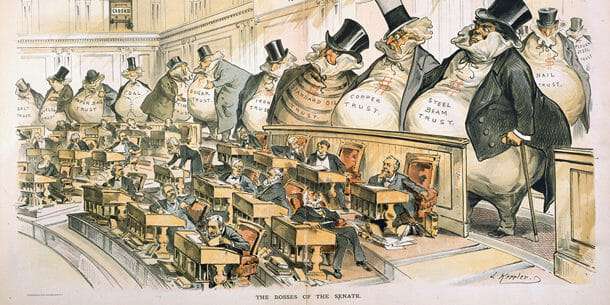 Lent begins today. I do not give anything up, but do observe the fasting. I’m a bit hungry and could use a Coke.

Do business regulations deprive owners of properties their rights without due process of law? As we watch the new administration, regulations continue to be a hot button issue. And they were in the 1870s.

On March 1, 1877, the Supreme Court upheld a series of Illinois Granger laws. In the Midwest of the 1870s, rural farmed wanted the government to regulate rising fare prices of railroad and grain elevator companies. Railroad companies had given secret rebates to larger customers and corrupted legislatures to get favorable legislation. Additionally, they charged excessive rates when they could. Illinois fixed the maximum freight and passenger rates and set maximum charges for storage of elevators.

The “I Don’t Want Regulations” Standpoint

But why would people not like that? The railroad companies argued that the law reduced the value of the properties and interfered with the freedom of a free enterprise system. Now, let’s move to 2017, where the administration wants to remove lots of regulations. Mark Costa, CEO of Eastman Chemical Co. and chair of Business Roundtable, said, “The majority of these regulations directly and negatively impact economic growth. As the administration considers new policies with regard to immigration or the expansion of ‘Buy America’ requirements, Business Roundtable stands ready to assist to prevent unintended consequences that would inhibit the ability for U.S. companies to drive economic growth and be globally competitive,” he wrote.

The “Regulations Are Necessary” Side

In 1877, the government argued that they needed the power to regulate in the public interest because of oppressive businesses and financial practices. Again, moving to 2017, Thomas Riggins recently wrote, “[t[he fact is, without regulations, the private sector acts with unrestrained greed to exploit, steal, lie, rob, cheat, and variously devastate the public sector in order to enrich itself with no regard to the well being of the American people.” Sounds about the same reasoning.

The Opinion of the Supreme Court

Generally, the Court decided that states may create regulations on the use of private property when such regulations becomes necessary for the public good.

Enough has already been said to show that, when private property is devoted to a public use, it is subject to public regulation. It remains only to ascertain whether the warehouses of these plaintiffs in error, and the business which is carried on there, come within the operation of this principle.

The decision gave legislatures broad powers over social legislation through the Commerce Clause. Justice Douglas concluded, “If unwise legislation was passed, the remedy was at the polls, not in the courts.”

What Douglas does not mention (mainly, I would imagine because he had a broad interpretation of the Commerce Clause) was that Munn was taken down a peg during the heart of the Gilded Age. Mark Twain came up with this term for this notably corrupt period in our history (which many conservative look fondly on today). He got the line from Shakespeare: “To gild refined gold, to paint the lily… is wasteful and ridiculous excess.” This political cartoon tells you all you need to know. 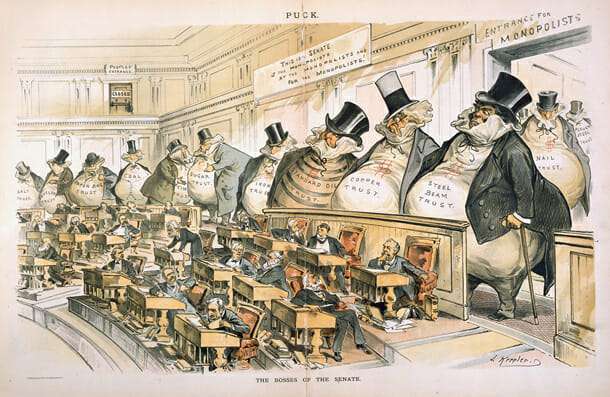 In Wabash, the Court reversed Munn and held that Illinois, with a similar law, could not regulate interstate commerce – only the federal government could. But at this point, no reason to go deeper into the Commerce Clause, which is about half of Constitutional Law.

Douglas wanted to remind reads that the judicial branch is not the only endpoint for bad legislation. The power to create good law still lies with people. And as we will watch how people respond to a lot of bad legislation, keep that in mind. Elections matter – from your local school board to mayor to state legislatures to Governor to Congress to the President.

Last night, for the first time in 20 years, I did not watch the President address Congress. I cannot listen to him belittle immigrants or make up lies anymore. Instead, we watched Shane Black’s The Nice Guys. Starring Russell Crowe and Ryan Gosling as detectives, an adult film actress dies but they are on the hunt for a girl who may look like her. In typical Shane Black fashion (go watch Kiss Kiss Bang Bang, if you haven’t), hi jinx ensues. First, Crowe is protecting a girl, who seems to be hunted by Gosling. The two detectives meet and get into a bit of a tussle. But you get to meet Gosling’s precocious daughter.

Of course, bad guys are actually after the girl – not just Gosling. And Crowe finds himself in a fight with these bad men. The two then need to work together to solve this mystery. I will not spoil anything else but a conspiracy exists!

The movie is absolutely hilarious. The crime plotline is better than most, but not to the top notch noir/crime movie stories. But really, the characters make the movie. You only get to know three, but each of the characters are fully realized. If you like Lethal Weapon or a buddy cop TV show, watch the movie. If you like to laugh and watch Ryan Gosling fall down a lot, watch the movie. You can currently find it on HBO or at any RedBox.

The wind must have blown the top over, but the garbage truck just emptied it.