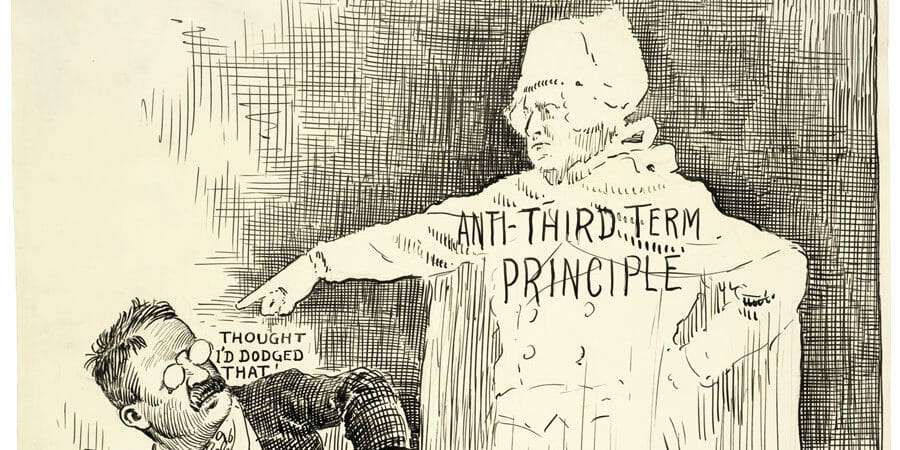 My Country – The Twenty-Second Amendment

Ratified on February 27, 1951, the twenty-second amendment limits the President to two terms.

William Penn provided the Frame of Government of 1683, every representative after serving for three years must retire for one year. The reason was so that “all may be fitted for government, and have experience of the care and burden of it.” Many of the other colonies had similar rules. The purpose became to guard the public against overbearing officers.

Jefferson strongly viewed that the President should be restricted to one term. However, George Washington through that, “When a people shall have become incapable of governing themselves and fit for a master, it is of little consequence from what quarter he comes.” But Jefferson did get his wish in 1951.

Rationale Behind the Twenty-Second Amendment

This year, some argued that President Obama could have won a third term. President Reagan argued the same thing for himself. And some agreed with him. Many believed that the Twenty-Second Amendment was undemocratic because it took a choice away from the public.

According to a 1987, Christian Science Monitor article, “Arthur Schlesinger Jr. observes correctly that the 22nd Amendment was an exercise in retroactive partisan vengeance and that the Republicans, unable to defeat FDR in four elections, were determined to get back at him once he was in the grave. Dr. Schlesinger contends that the 22nd Amendment is antidemocratic and asserts too that it reduces the accountability of presidents to the people: “Nothing makes a president more attentive to popular needs and concerns than the desire for reelection.” Historians and pundits on both the left and the right also claim the country may need an experienced veteran of public and world affairs in the White House in a time of crisis – an FDR to run again in 1940 or a Lincoln in 1864.”

But people continue to argue for its repeal. “Repealing the 22nd Amendment would not eliminate the possibility of presidential stumbles, but might lessen them, particularly if the country faced the prospect of electing an untutored new executive in the midst of a foreign policy crisis.”

Every gun that is made, every warship launched, every rocket fired signifies, in the final sense, a theft from those who hunger and are not fed, those who are cold and are not clothed.

This world in arms is not spending money alone. It is spending the sweat of its laborers, the genius of its scientists, the hopes of its children. The cost of one modern heavy bomber is this: a modern brick school in more than 30 cities. It is two electric power plants, each serving a town of 60,000 population. [It] is two fine, fully equipped hospitals. It is some fifty miles of concrete pavement. We pay for a single fighter with a half-million bushels of wheat. We pay for a single destroyer with new homes that could have housed more than 8,000 people… This is not a way of life at all, in any true sense. Under the cloud of threatening war, it is humanity hanging from a cross of iron.

Everyone continues to talk about the Oscars snafu. And I love award shows. I watch each one of them. I enjoy watching people at the top of their craft accepting award and talking about the creative process. It honestly doesn’t matter who wins (unless I’m in a pool). In the end, one group of people who spent years building something thought they won. And neither could the actual winners. Whole groups of people believed all of their hard work resulted in the largest prize in their field.

Imagine if you thought you could get a promotion at your job. And you go in for your annual review. The boss tells you that you got the promotion and started to show you to your office. But as you walked into your office, the operations person walks in with their headset. Through the window, you saw the actual new occupant walk by. You needed to call that person over and show them their new office. You’d feel terrible. And you should.

I still have not seen Moonlight. I’m sure it is fantastic. And I will watch it. I look forward to seeing it. But I also wish they had their moment in the sun. They deserved it.