Habeas Corpus, the Next Friend Doctrine, and the Rosenbergs 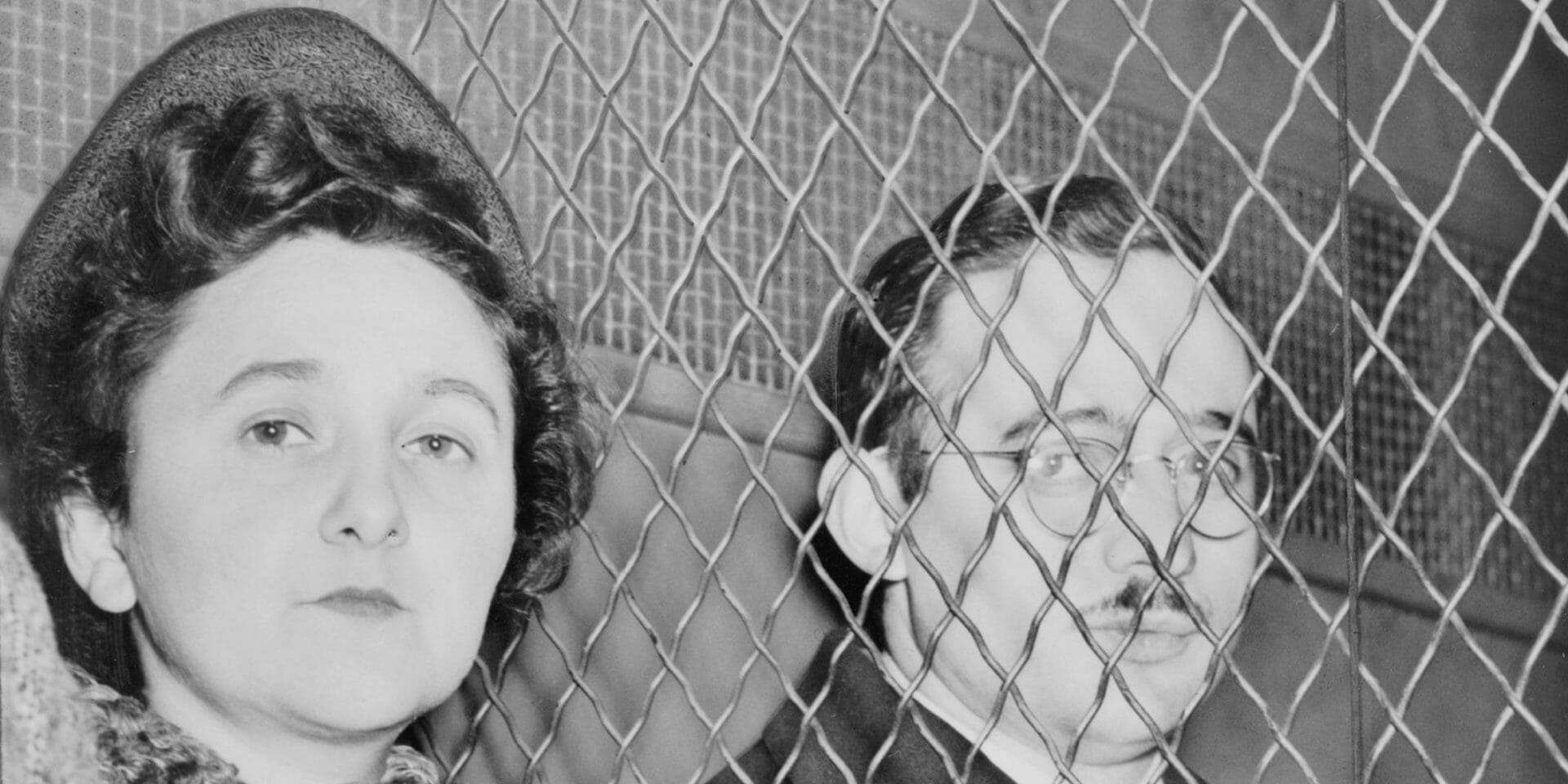 My Country – Habeas Corpus and the Next Friend

I believe the first time I heard the term “habeas corpus” was when I watched Duck Soup. As Chicolini stands trial for treason, Rufus T. Firefly (Groucho Marx) ends his examination with, “I wanted to get a writ of Habeas Corpus, but I should’ve gotten a-rid of you instead.” The next time was during US History. We learned it means produce the body (it really means “you may have the body”).

On February 26, 1704, the House of Lords submitted a resolution, which stated an important addition to legal procedure.

That every Englishman, who is imprisoned by any authority whatsoever, has an undoubted right, by his agents, or friends, to apply for, and obtain a writ of habeas corpus, in order to procure his liberty by due course of law.

When Justice Douglas wrote An Almanac of Liberty, a federal act regulated the use of habeas corpus. An application of habeas corpus must be signed by the prisoner or by someone acting in his behalf. The act remains as law today (28 U.S. Code § 2242).

Generally, a next friend appears in court on behalf of detained prisoners who are unable, usually because of mental incompetence or inaccessibility, to seek relief themselves. (Whitmore v. Arkansas, 495 U.S. 149 (1990)) .

In Whitmore, the Court laid out the prerequisites for “next friend” standing.

The burden is on the “next friend” clearly to establish the propriety of his status and thereby justify the jurisdiction of the court. Justices Brennan and Marshall dissented in this case on the basis that this standing is a product of common law. They argued the Court could expand on the common law rationales to fit the Constitution – but the Court declined.

Justice Douglas used one other example – when a prisoner is held incommunicado. Specifically, when that prisioner is unable to hire an attorney or authorize anyone to act on their behalf. The example that Douglas uses is Julius and Ethel Rosenberg.

Justice Douglas noted that this procedure of next friend allows the stay of execution for the Rosenbergs, who were charged and later executed for espionage. “The ‘next friend’ who made application was not an agent or attorney for the Rosenbergs. But he had a substantial and serious legal point to tender on their behalf, a point which their counsel had never raised.”

Douglas granted that application – however, the actions at the Supreme Court at this point were called “one of the most dramatic and novel episodes in all the august annals of the U.S. Supreme Court.”

The Rosenbergs appealed their conviction and death sentence for leaking atomic bomb secrets to the Russians. When the appeal came to the Court on October 7, 1952, Douglas voted no to hear the appeal. Through the spring, other appeals came to the Court on their behalf and Douglas stuck to his no vote until May 22. Douglas came out declaring that the trial seemed unfair and sent the Court into a tailspin.

The memo that Douglas wrote would lead the Court to a back and forth of accepting the appeal – upsetting just about every judge on the Court. Eventually, the lineup of votes led the matter to rest in Justice Douglas’s hands. He made the determination if their execution would be stayed and if oral arguments would be heard. Douglas decided to stay the execution but not hear oral arguments. “To a puzzled Felix Frankfurter, it seemed as though whatever the Rosenbergs’ attorneys tried, Douglas voted to ensure their loss.” (Wild Bill: The Legand and Life of WIlliam O. Douglas, Bruce Allen Murphy, pgs. 317-320)

After losing that appeal, the Rosenbergs’ attorney tried for writ of habeas corpus, which Douglas argued “most vigorously against.” But then they appealed to the individual justices more – mainly Justice Douglas.

Appealing Only to Douglas

Lawyers continued to talk with Justice Douglas to get a hearing, even though Justice Jackson was the appropriate Justice for Second District appeals. And Douglas was sympathetic and felt that the prosecutor of the trial had prejudice and that the criminal trial became a celebrity trial. However, because the Court had made its determinations and Douglas felt he did not want to question that. Nonetheless, his compatriots were confused by all of his actions when Fyke Farmer brought the “next friend” appeal.

Under the 1946 Atomic Energy Act, death sentences were no longer mandatory for espionage. The sentence could be issued only if it had been proven that the offense was committed with intent to injure the United States. And Farmer argued that none of this was done in the Rosenbergs’ case.

So, Douglas prepared a memo granting the stay so this new argument could be heard. When Douglas brought this memo to Chief Justice Vinson, the press got wind. They stalked the Chief Justice’s apartment as protesters on Capital Hill held signs wishing for the Rosenbergs’ blood. Vinson made it clear to Douglas he did not like the argument and communicated with the Attorney General the goings-on.

Going On His Own

Douglas felt he needed to issue the stay at this point on his own but went to his frenemy, Justice Frankfurter. Frankfurter told him to “Do what your conscience tells you, not what the Chief Justice tells you.” Justice Black agreed and felt that the opinion was sound. So, Douglas released the stay.

But the Chief Justice and Justice Jackson had already made plans to respond to this action. They met with the Attorney General, who instructed the Justice Department to petition for a review of the stay. Douglas had left for his summer trip west. But with anger, he went back to Washington to fight.

The Court argued and listened to the attorneys plead their cases. But in the end a majority would not stay the execution.

Bruce Allen Murphy wrote, “Guilty or not, the Rosenbergs lost their bid for delay in party because a frayed Supreme Court Felix Frankfurter and Robert Jackson were motivated to prevent William O. Douglas from taking the moral high ground.” (Id. at 326)

At the time, talks of impeachment swirled around Douglas. W.M. Wheeler, a Democrat, filed formal charged alleged high crimes and misdemeanors. They argued he used Communist propaganda and that his rulings were politically motivated. But slowly, it became clear that no proof existed. Eventually the issue died.

The court issued a ruling a month after the Rosenbergs were executed. Douglas continued his anguish and felt that Court acted to hastily with such a decision. He issued a dissent:

When the motion for a stay was before me, I was deeply troubled by the legal question tendered. After twelve hours of research and study I concluded, as my opinion indicated, that the question was a substantial one, never presented to this Count and never decided by any court. So I issued a stay order. Now I have had the benefit of an additional argument and additional study and reflection. Now I know that I am right on the law.

No man or woman should go to death under an unlawful sentence merely because his lawyer failed to raise the point. It is that function among other that the Great Writ [of habeas corpus] serves.

Douglas seemed eternally burned by the Rosenbergs’ case and felt the country was out for blood. And he blamed Chief Justice Vinson.

Best Animated Feature: Zootopia. (I need to watch this on Netflix)

Best Costume Design: Fantastic Beasts and Where to Find Them. (I did like this movie more than I thought I would.)

Best Documentary (Feature): O.J.: Made in America. (Watch this documentary.)

Best Makeup and Hairstyling: Star Trek Beyond. (The makeup was good – but who knows?)

Best Music (Original Song): “City of Stars” La La Land. (I did not like this song very much.)

Best Animated Short Film: Piper. (They need to make these available online for a free)

Best Visual Effects: Jungle Book. (I should watch this on Netflix too)

Could we have two extra cups of cheese and then you don’t have to worry about coming back here at all?