One Month Later – Immigration and Almost to 2017

One month ago, I was sitting in our recliner shaking. Today, I’m back at work and back to listening to Slate podcasts that I could not listen to. I’m done shaking.

So what have I done instead? 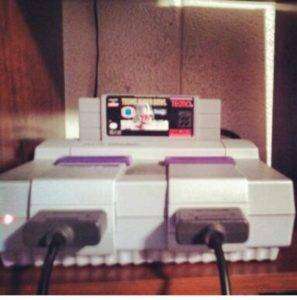 One thing that really focused my energy was listening to the podcast Slate put out on The New Americans, which interviewed 6 new Americans who became citizens on July 4. If you want to feel good about the country we live in, listen to an immigrant who truly understands what this country is about.

I learned about immigration early in life for someone whose relatives moved to Chicago 100 years prior. When I grew up, my closest friend in middle school was a recent immigrant from Mexico. We spent almost every weekend together. When most people preferred to bully me and ignore me, he wanted to play football and basketball and mainly, Super Nintendo. This picture was recently posted to Facebook from him. I would spent days with his parents who worked more hours than I could count and barely spoke English. His mother still made my favorite meal of all time – and I have no idea what it really was. It was a green chile chicken that must have cooked for days. I learned to communicate to his family as best we could and it was a remarkable number of years. My mother also helped him (and he helped my mother in return as she got licensed as an ESL teacher) learn more English.  We grew apart as people do in high school, but we were able to reconnect recently. And the Cubs World Series win brought the two of us back together due to our love to the mid-90s Cubs. He was the first person I thought of as they got that last out as he was there with my family and me for my first trip to Wrigley. First row in the bleachers at Wrigley. We had our gloves – but it was a 0-0 tie until the 9th inning.

Then, I took a first year study class at Ripon College that detailed immigration. I learned more about what America means in that class than in all of my political science classes that showed me what America became. That summer, I was working in the city for an environmental lobbying firm that would send me out to suburbs to raise money in the evenings. I learned a lot about myself and what people expect from politics by knocking on their doors at dinner time. But the moment I remember most was sitting on Metra one morning with an older couple who were cramming for their immigration test. I was sitting across the row from them and I saw what they were reading and smiled at them. He handed me the question and asked with a thick Polish accent if I could quiz them with a few questions. They didn’t need the quiz but you could see the nervousness floating through their bodies, so I helped. As we arrived in the train station, I handed back the paper and said to them, congratulations and welcome. I have no idea what happened to them after that but nothing made me happier than knowing these two people wanted to become Americans. Their smiles should be on the $20 bill.

This podcast reinforced that feeling. I teared up more times than I could count. This is what I want to feel every day. Hope and joy in my country from people who truly want to be here. I’m so tired of hearing people complain when we have so much already. Listen to the words of someone who has been a refugee his entire life talk, with no home, about this country and you will understand what this shining city on the hill actually is. It may suck to not have the best job or the biggest house or to have so much debt – but there are far worse things. These voices are the future of this country, not someone who believes we need to turn back time.

“For I was hungry and you gave me food, I was thirsty and you gave me drink, a stranger and you welcomed me, naked and you clothed me, ill and you cared for me, in prison and you visited me” – Matthew 25:35-36