Book 7 of 52: Revelation by Elaine Pagels

When I was growing up, I spent a decent amount of time at church. From 4th grade to 8th grade, I was an altar server at Saint Raymond’s in Mt. Prospect. I read the Bible on a bet with my friend Louis. We decided to read it from cover to cover and see who could do it fastest. I don’t remember if we came to a decision. I know I finished it after he moved away. Around this time, I seriously considered becoming a priest. And this was true into law school when I walked down to St. Peter’s in the Loop to ask if they would take me and my student loan debt. They didn’t, but I continue to have a thirst for religious texts.

Revelations: Visions, Prophecy, & Politics in the Book of Revelation by Elaine Pagels details to story of the possibly writing of the book, how the book got added to the final edition of the New Testament, and its legacy. 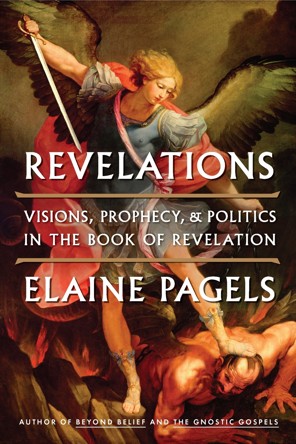 The story Pagels tells discusses the politics of the Book of Revelation from its inception to today. It is an allegory that lives on due to its very general depictions of governmental power, evil, and the hope of a murderous cleanse. Each generation has taken the book as its own. We have preachers today who are readying their flocks for the coming end of days. Millions of copies of books in the Left Behind series. All of this due to the writings of a man(?) who saw the early days of the Church that were surrounded by death, despair, corruption, power, and uncertainty.

I have never believed in this book. I think it tells a story. It means a lot to certain people, but there is not a reason in the world that I would believe that the end times would read like this. Mainly, I don’t believe in an end times, so the point is moot. But the second coming of Christ cannot (if it truly would happen) consist of such blood lost. This books is counter-intuitive to what I believe the rest of the book to be telling me. But it is a good way to scare people into following along. Revelations by Elaine Pagels didn’t really strengthen my thoughts on this book, but it did give me an idea of what the early Church leaders cared about the the inner political struggles that defined the largest organization to truly exist on this globe.